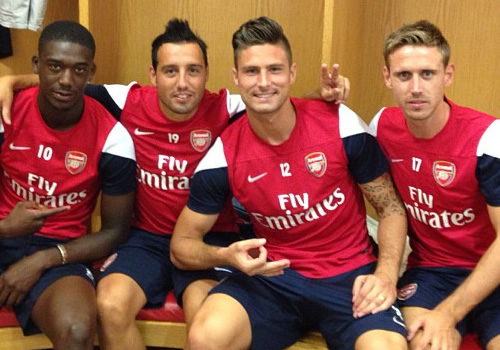 Olivier Giroud admits he is worried by the lack of numbers in Arsenal’s squad ahead of a challenging Champions League group-stage campaign.

Arsene Wenger signed Yaya Sanogo on a free transfer, whilst the Frenchman spent a club-record £42.5m to bring the Germany international Mesut Ozil to The Emirates on deadline day.

Arsenal, who face Marseille at the Stade Velodrome on Wednesday night, have won their last three Premier League games, but Giroud expressed his concerns about Wenger’s small squad.

“We have a quality squad but I’m a bit scared about the numbers we have,” Giroud said. “We will face problems because of the numbers in our squad.

“We’ll do everything we can to rival the big clubs, but saying that we want to win the Champions League is a bit presumptuous when you see that Bayern had to play in three finals before winning one.

“It will be a very tough group, but I think we have enough quality to go through.”

Giroud believes Arsenal have shown good away form in Europe in recent seasons, which includes a 1-0 win against Marseille in France in 2011.

“Away from home, we have always been audacious,” Giroud added.

“At home through some spells, we played with the handbrake on because we did not have the same confidence. Our away record can compare to anybody in Europe.”