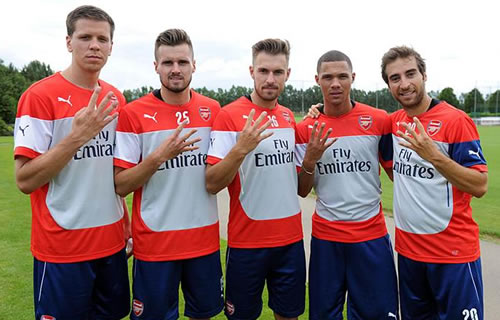 Arsenal's squad are back in pre-season training Photo: Arsenal FC

Arsenal have become the first sports team in the country to reach four million followers on Twitter.

The Gunners are the third club in the world to reach the landmark after Barcelona (12 million) and Real Madrid (11.7 million).

The north London club have just pipped Chelsea to the total, with the Blues currently on 3.99 million followers.

“We are fortunate to enjoy fantastic support right around the world and social media has proven a brilliant way of engaging with our fans, wherever they are.

“Last season we led successful Twitter campaigns around key events such as the signing of Mesut Ozil, the FA Cup final victory and the subsequent parade – where we tweeted video from the top of the bus. We even got Arsene Wenger to do a Twitter Takeover for the first time.

“With the new season fast approaching, we’ll be looking to introduce more innovations in the months to come.”

The Gunners are well ahead of north London rivals Tottenham, who currently have 849,000 followers.