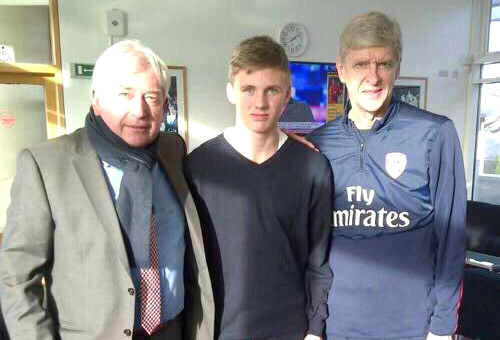 Arsenal are closing in on a deal to sign highly-rated striker Martin Graiciar from Czech outfit Viktoria Plzen.

The 15-year-old confirmed on his Facebook page that he is set to travel to London over the weekend to undergo a medical ahead of a possible move to the north London club.

Arsenal tried to sign Graiciar last year but a deal failed to materialise after he was snapped posing for a picture with manager Arsene Wenger at the Gunners’ training ground during a trial at the club.

Now, the teenager has revealed that he is close to securing a move to the Emirates Stadium outfit, where he hopes to gain valuable experience training with Wenger’s first-team.

Graiciar wrote on his Facebook page: “Today I spent last day in school, where I had to fulfil my study requirements, before my way to England. I will fly on Saturday at 14:45.

“I will be there for two weeks in Arsenal, where I should complete my physical (medical) examination, two matches: against Southampton and West Ham, and some days I should train with A-team.”

Both Chelsea and Real Madrid are reported to have been keen on signing the Czech wonder-kid but it appears that Arsenal are set to win the race for his signature.