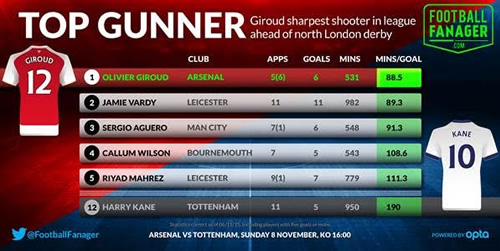 Olivier Giroud is the sharpest shooter in the Premier League Photo: Football Fanager

An infographic produced by fantasy sports site Football Fanager shows that the Frenchman tops the Premier League when it comes to his goals-per-minute ratio this season, Spurs striker Kane is well down the list in 12th position.

Arsenal and Spurs meet at the Emirates on Sunday, and Giroud goes into the game having scored a goal every 88.5 minutes in the top-flight.

Meanwhile, despite netting against Aston Villa on Monday night, Kane has only scored once every 190 minutes.