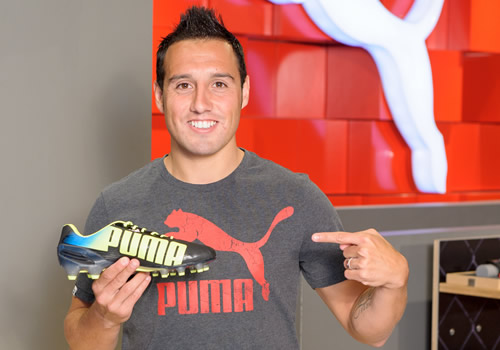 Santi Cazorla believes Arsenal striker Olivier Giroud is at the same level as the likes of Sergio Aguero and Luis Suarez.

The France international, who joined Arsenal from Montpellier in 2012, hasn’t found the back of net in his last two Premier League outings.

For me, he is [at] the same level as the other strikers in the league

The 27-year-old has scored 10 goals and made six assists in the English top-flight this term, leaving him seventh in the league’s goal-scoring charts.

And Arsenal midfielder Cazorla rates his Gunners team-mate on a par with Liverpool’s prolific Suarez and City talisman Aguero.

“For me, he is [at] the same level as the other strikers in the league,” Cazorla told RMC.

“He is sturdy and can keep the ball. On the surface, he is effective, either with his feet or head. He is a little different from what is done in England, but he offers a lot.

“He is a great striker and has showed it all season, for Arsenal and France. He has improved to a high level and is getting better every year.”

Cazorla, who moved to the Gunners from Malaga in 2012, revealed that he came close to joining nine-time European champions Real Madrid during various stages in his career.

“Both clubs [Barcelona and Real Madrid] are monuments of Spanish football. All players are dreaming about it. I had contact with Madrid a few years ago but a move could not be completed.

“On several occasions, it is fate that I have not been able to join one of these two clubs. But my career has developed well and I have no regrets.”