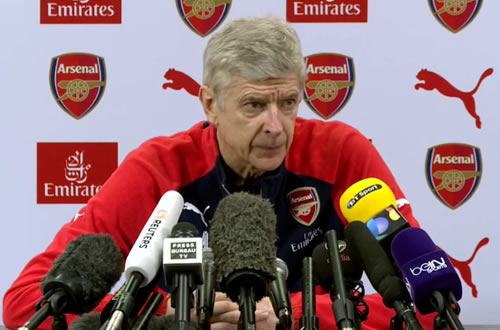 Arsene Wenger has poured cold water on reports that Arsenal could be set to sign Javier Hernandez before Monday’s transfer deadline.

The Gunners have been linked with a host of players in recent days as Wenger considers bolstering his squad ahead of the final 15 Premier League games of the season.

Arsenal have already brought in midfielder Mohamed Elneny from FC Basel as Wenger added cover for the likes of Francis Coquelin.

However, the Arsenal boss rejected reports that Arsenal could be set to make a late move to sign former Manchester United striker Hernandez, who currently plays for German side Bayer Leverkusen.

Asked about the reports linking Arsenal with Hernandez, Wenger told a news conference at London Colney on Friday morning: “No. We have Danny Welbeck coming back now and Alexis Sanchez is back.

“We have Olivier Giroud and Theo Walcott [up front], so you would not understand again why I don’t play Giroud and I play Hernandez. We have the quality and the number of players that we need.”

Arsenal, who are third in the Premier League, are preparing for their FA Cup clash with Burnley at Emirates Stadium as they look to book their place in the fifth round of the competition.