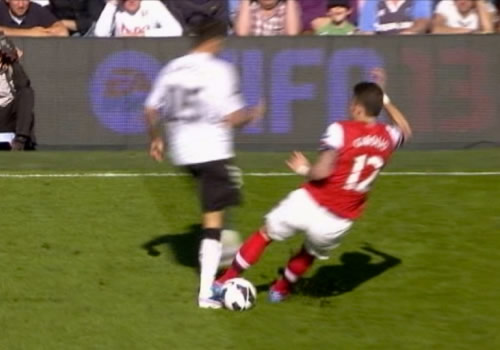 Olivier Giroud was sent off for this tackle on Stanislav Manolev Photo: BBC

Arsene Wenger has described the tackle by Olivier Giroud that earned the Arsenal striker a red card against Fulham as “accidental” and “very minor”.

The French striker will miss the Gunners’ next three games after Arsenal’s appeal against the decision was dismissed by The FA.

Giroud was given his marching orders late on in the 1-0 win at Craven Cottage after clattering into Stanislav Manolev.

But Wenger feels that the 26-year-old did not deserve the red card.

“After the game, I was a little bit less convinced that he didn’t deserve the red card but having seen it again, I feel it’s completely accidental and a very minor incident.

“That’s why I decided to appeal. I’m sad that it didn’t work but we have to cope with it.”

Wenger admits that losing Giroud for three games is a “blow” but has backed his side to cope in his absence.

“It is a blow that we cannot have him available,” Wenger added. “We will have to do without him and we will do it.