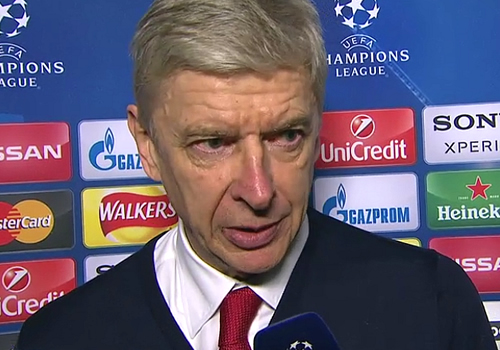 Arsene Wenger was not happy in his post-match interview Photo: BT Sport

Arsene Wenger blasted Arsenal’s “naivety” after watching his side slump to a 2-0 loss to Barcelona in the first leg of their Champions League last-16 tie on Tuesday night.

After a goalless first half at Emirates Stadium in which both sides had chances to break the deadlock, Lionel Messi gave the visitors the lead in the 71st minute when he finished off a sweeping counter-attack after combining with Neymar.

I believe technically we were very average overall

And Messi then doubled his side’s lead when he scored a penalty in the 83rd minute after substitute Mathieu Flamini clumsily brought down him in the box.

The disappointing defeat leaves Arsenal with it all to do heading into the return leg in Barcelona in three weeks’ time.

And Wenger was not pleased with the way his side let the game get away from them in the closing stages.

Speaking to BT Sport after the game, Wenger said: “Barcelona is a great team, we knew that before the game, we have learned nothing new.

“But we put a lot of energy into the game and I believe technically we were very average overall.

“The regret I have is that once we looked like we were dominating the game in the last 15-20 minutes, we gave a goal away.

“It was similar to Monaco – naive. That’s what is frustrating, because as it looked like we could win this game, we just gave it away.

“It’s difficult because in the last 20 minutes because I felt we were going to score.”

He added: “We knew before the game that the one thing we could not afford to do was to give them counter-attacks because they are very dangerous – and that’s exactly what we did.”

Arsenal now turn their attentions back to the Premier League and their trip to Manchester United on Sunday.