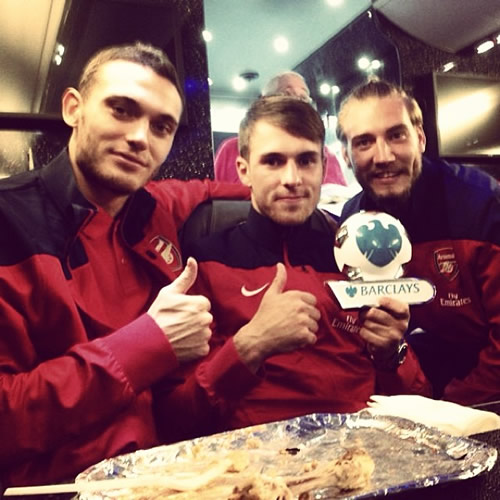 Elsewhere, Chelsea moved to the top of Group E after an emphatic 3-0 win at Schalke, whilst Celtic secured a much-needed 2-1 victory over Ajax at Parkhead.

Here is a selection of our favourite tweets from the professionals, in chronological order, after an enthralling night of Champions League action.

Arsenal legend David Seaman (‏@thedavidseaman) reckons his beloved Gunners could struggle on Tuesday night: “Got a feeling that this game will be a good test for us!!! #COYG”

Everton striker Romelu Lukaku (‏@RomeluLukaku9) is spoilt for choice: “It’s difficult to watch so many games at the same time #somanygoodgames”

It’s unclear whether Ryan Babel ‏(@RyanBabel) is unhappy because current club Ajax are losing or that Dortmund have broken Arsenal hearts: “Smh.”

Former Chelsea midfielder Jody Morris (‏@morriskid) is finding the Blues’ counter-attacking exciting: “What a goal that was. That’s what you call a counter!”

Republic of Ireland legend Shay Given (‏@No1shaygiven) is happy for the Hoops: “A big result for @celticfc tonight. The Bhoys are still in there fighting #hailhail”

Arsenal midfielder Aaron Ramsey ‏(@aaronramsey) is bitterly disappointed: “Gutted about the result. After a slow start we played some good football. Focus on the Palace game now and getting back to winning ways.”