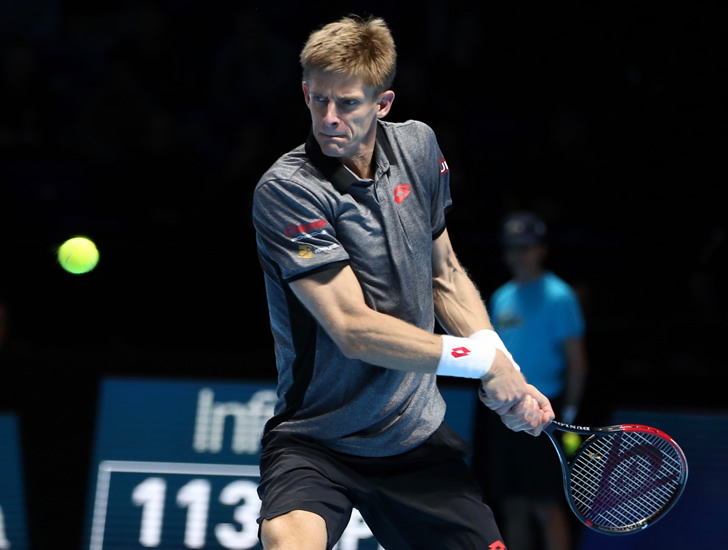 There had been torrential rain, then glorious winter sunshine, and amid the changes in shade and light, there shone bright red specks at every turn.

This was Armistice Day, and not just any 11th day of the 11th month. It marked 100 years since the end of the First World War, and a nation would come to a halt to mark the 11th hour.

In a peculiar twist at the O2, where the finale of the tennis year was about to get under way in the biggest and most prestigious tournament outside the four Grand Slams, the chief sponsor Nitto, it transpired, was also marking its 100th anniversary. And the ATP’s World Tour Finals marked its 10th year in London.

It would be another couple of hours before the first two of the elite eight hit the show court in front of 18,000 fans, and their opening match heralded the first of many milestones.

Kevin Anderson, at the age of 32, would play in his first World Tour Finals after two years of career-best achievements. The tall South African had, in the last 18 months, reached his first two Major finals, and last month he capped his best ever season by winning his biggest title, his first ATP500, with victory over Kei Nishikori in Vienna. It sealed his first qualification for the season finale in London, making him the fourth oldest first-time qualifier, and the first South African to do so in 23 years.

All the more sweet because the journey had been a long one for the intelligent and much-liked late bloomer. Anderson had finished five of his past six seasons in the top 20, but his previous best finish came in 2015, when he was year-end No12. However, after breaking into the top 10 that October, he was side-lined by injuries, and dropped to No80 at the start of 2017.

Along the way, he became an active member of the ATP Player Council, took on numerous environmental initiatives, and turned to a sports psychologist to help find the key to sharpening his killer instinct on court. As a result, the nominee for the ATP’s Sportsmanship Award hit a career high No5 after an extraordinary five-set win over Roger Federer at Wimbledon and an equally impressive win over John Isner, 26-24 in the fifth set in the semis.

And now, he and former college rival Isner—6ft 10ins and 6ft 8ins respectively, and aged 33 and 32 respectively—became the tallest players ever to compete at the tournament as well as the oldest first-time qualifiers since 1972.

Anderson, in his debut match, played Dominic Thiem, who was making his third appearance in the tournament and trying to get beyond the round-robin phase for the first time.

The 25-year-old No8 ranked Austrian, seeded No6 after Rafael Nadal and Juan Martin del Potro pulled out with injury, came to London with more quarter-final or better runs than anyone else, 14 of them. He also made his first Major final at Roland Garros and his second Masters final in Madrid.

For four years, Anderson had dominated Thiem, dropping just two sets in six meetings until 2017. But Thiem this year had got two back, winning in straights at the Madrid Masters and the US Open.

However, Anderson has never looked more at home than he did as he strode out for their ninth meeting. Perhaps it was the determination to make the most of this moment after such a long wait to qualify. But perhaps it was also that his wife Kelsey, who accompanies him around the world and shares the workload of his off-court campaigning, was marking her birthday on this 11th day of the 11th month.

Whatever the incentive, he broke to take a 3-1 lead, consolidated with a love hold, and threatened again in the sixth game, attacking the net even on Thiem’s serve.

But the Austrian held that seven-and-a-half-minute game, and fended off more break points to keep it at 3-5. Anderson’s serve, however, was proving unbreakable: He held to love again, 6-3, after 41 minutes. He had notched up 15 winners to five from Thiem, but more impressive still, he had made 11/11 in forays to the net.

The second set was a much closer affair, with Thiem serving first and upping his aggression to hit even more winners than Anderson, 18 to 14. Not a break point emerged as they headed to a tie-break, and that too would find very little space between them, as they put together some long, crowd-pleasing rallies. Anderson had to save two set points before finally closing out the match, 7-6(10), to score his first win in London since the Wimbledon final.

Courteous as ever at the net, it was nevertheless the opportunity to thank the crowd for their support that brought a huge smile to his face: “Join me”, he said, “in wishing my wife a happy birthday”, and then he led a rousing rendition of the classic song.

It was a nice moment, and an upbeat conclusion to a serious day. And maybe the delay coming to press was the result of a little post-match celebration, too. He had, after all, earned it, stacking up 40/44 points on first serve, 13 aces, and 17 out of 19 points won at the net.

One thing’s for sure: He will be tough to beat in this mood and with this confident, attacking tennis.