“It’s amazing to be remembered as the 2019 champion. It is a dream come true” 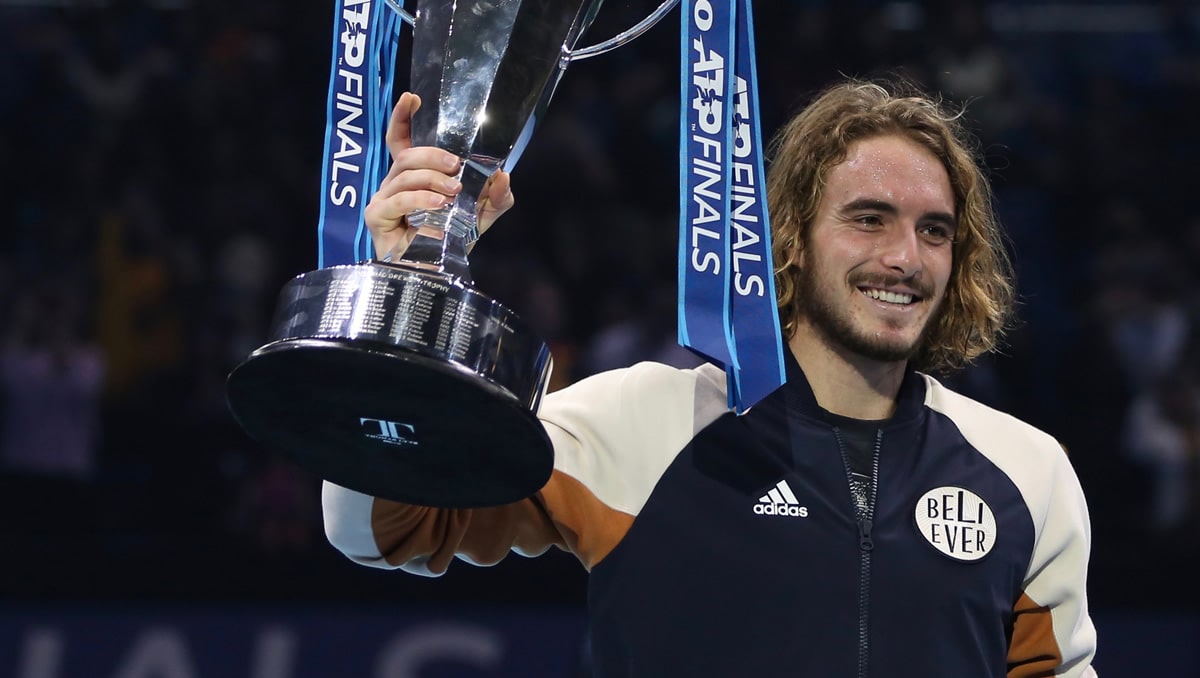 From the oldest on Saturday to one of the youngest on Sunday, a story for the ages quickly changed when 21-year-old Stefanos Tsitsipas beat 38-year-old Roger Federer to take his place in the final of the season’s finale for the first time.

The charismatic Greek is even younger than Federer was when the Swiss first qualified in 2002—both 21, but Federer’s birthday is four days before Tsitsipas’s—and Federer only reached the semis in that first year. Already, the Greek has taken a step further, and aimed to become the youngest champion since 2001—the sixth youngest ever.

He had, this season, already beaten Federer, Rafael Nadal, and Novak Djokovic, as well as fellow London qualifiers, the defending champion Alexander Zverev and fellow debutant Matteo Berrettini. Once here, he beat the only man among the elite eight against whom who he had a losing record, beating Daniil Medvedev.

The one man he had not beaten this year was his final opponent, Dominic Thiem.

Three times before, the young Austrian had qualified for this tournament, and three times he had failed to get through the round-robin phases. This year, he found himself in the same group as six-time champion Federer and five-time champion Djokovic.

The draw proved to be no hindrance in what has been an outstanding season for the Austrian. He won five titles despite being hit by illness more than once during 2019, earned his first Masters title in Indian Wells, and made his second run to the Roland Garros final.

Through the year, he had also notched up wins over Federer, Djokovic and Nadal, and he continued that kind of form in a blistering display over both former champions.

He had good reason to be optimistic about his semi-final match too, boasting a 5-2 advantage over Zverev. Sure enough, even though Thiem had been below par as he tried to fight off a cold, he mastered the German.

This early this spring, Thiem changed his coaching set-up for the first time in many years, taking on Nicolas Massu, and immediately the Austrian went up a notch, made his tennis more pro-active and aggressive, and he won his first Masters in Indian Wells.

The Austrian remains a quiet and modest character, and has certainly endeared himself to Londoners, but his increasingly expansive single-handed style of play and newly assertive attitude have carried that support a new level.

But the O2 has also embraced the explosive tennis and more expressive personality of Tsitsipas, who many have been seeing for the first time. That he, like Thiem, has a big single-handed backhand and even more enthusiasm for attacking the net, has done his popularity no harm either.

Who, then, would have the bigger support for this first contest between single-handers since 2006?

As most anticipated, this would be as close to call as possible: Indeed the first set would end after 65 minutes with just one point separating the two men, 45-44 in Thiem’s favour. That was, it ought to be said, after the Greek seemed to dominate the early stages with his serving, combined with some frequent and successful net attacks.

But Thiem was the first to save break point in the fourth game, and then as he warmed to the task, he worked break points back in the seventh.

Both were up to the task of saving them in some really intense passages of play. Right from the off, both were clenching the fist during every game, and not just when they had won it.

Now Thiem had to save more break points, two of them but it would head to a tie-break, and with Tsitsipas on 10-10 at the net thus far.

In the final game, too, it was close—first Thiem ahead, then Tsitsipas levelling at 5-5, but the Austrian injected some extra power and oral grunt into his shots and it paid off. He forced an error, and aced for the set, 7-6(6).

But the mental resolve and confidence of the Greek has impressed as much as any of his shot-making this year. Witness facing 12 break points against Federer in both Australia and again this week, and saving all but one?

He came back as though he never doubted that he could win this match. Break, love hold, break and another hold and he was 4-0 up, with 12-12 first serves.

Thiem did get himself into the set briefly with two holds, but the damage was done. Tsitsipas served it out, 6-2 in just 26 minutes, having made 16/18 on his serve.

Thiem, perhaps sensibly, took a short comfort break to reset. But perhaps the first set had drained the batteries of a man who had wrestled to stay 100 percent fit in the latter stages of this tournament.

The Austrian showed real grit to hold off an explosive second game by Tsitsipas, facing two break points in a seven-minute tussle. No wonder Thiem pumped his fist when he held. The trouble was, Tsitsipas held quickly and with ease: The Austrian was up to the line in the blink of an eye.

And this time, he could not stem the tide: The Greek broke, and then held to love, 3-1. The match looked as though it could only head one way, but Thiem’s fight and fitness were not exhausted yet.

His forehand was huge, and it drew two errors from the Greek to break: 3-3. All at once, it was the Thiem who had beaten Federer and Djokovic, with a backhand winner then a cross-court forehand to hold for love, 4-3. It would, appropriately be decided by a tie-break.

This time, with the entire O2 arena pounding to chants of the men’s names, Tsitsipas stole the lead, 4-1, only for Thiem to level, 4-4. But the young Greek, who just 12 months ago won the NextGen Finals in Milan, stayed firm, and served it out, 7-6(4) after one of the best finals the O2 has seen, after two hours 36 minutes.

The champion addressed the crowd:

Then he turned to the downcast loser, who came so tantalisingly close: “You’ve been an inspiration, not just for me but many other players around the world.”

He had even inspired Tsitsipas himself, he admitted before the match. But the talent, energy and determination of the Greek is going to take him much further and surely very soon, while this fresh, creative personality is going to win many more fans, too.

So leave the last words to the new star of London, this remarkable 21-year-old:

“I can’t sum up my emotions right now. It’s amazing to be remembered as the 2019 champion. It is a dream come true and the best way to end this match.”