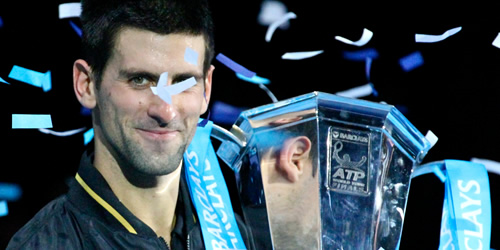 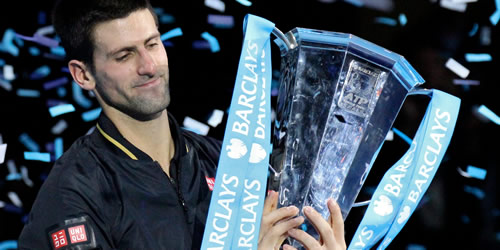 It all ends here. Such has been the message—writ large and spoken with foreboding—ahead of each match of the 2012 ATP World Tour Finals.

If more drama was needed for the coming together of tennis’s finest players in one intense week of competition, then this portentous strap-line provided it.

But come the eighth day, with 12 round-robin matches played and two semi-finals won and lost, this really was where it all ended for Roger Federer and Novak Djokovic.

And how right it felt that the last two men standing from the eight who had battled all year to play at the year-end finale should be the two who would end 2012 at the top of the rankings, the two who had owned the No1 spot between them for the entire 12 months of one of the most memorable tennis years of the millennium.

Their paths to this point were unvarying in their standard and their achievement.

Djokovic began as No1, took the first Grand Slam of the year in Australia, won three Masters titles, reached the finals of two more Slams—the French and US Opens—and three more Masters. Add in the Beijing 500 title and his tally of silverware was up to five.

Federer took over as No1 by winning his Grand Slam at Wimbledon in July—acquiescing to Djokovic again only a week ago—and then took silver at the Olympics the next month. Along the way, he also won three Masters titles as well as two 500s for a 2012 title total of six.

Even in their head-to-heads there was nothing to choose, no clue to who might end the winner, who the loser. In four matches, they had each beaten the other in a Grand Slam and in a Masters.

So while the year-end ranking was done and dusted—indeed the gap between them would increase after the tournament regardless who became champion—there was much personal pride, professional standing, and international kudos at stake.

Federer summed it up simply and clearly: “For me, I think for both of us, it’s pretty straightforward.

“I think we’ve got to press out the last juice that’s left in our body and make it a successful year end…it is a big opportunity playing the last match of the season, and facing off against Novak obviously is always special, especially here at the World Tour Finals.”

The match started with a combination of stunned silence and ecstatic cheering. Federer opened proceedings, and any question about whether his serve would be as unreliable as in his three-set loss to Juan Martin del Potro or as match-winning as it had been in serving out his straight sets win over Andy Murray was apparently answered. He reeled off four great first serves, two of them aces and the fourth a serve and volley winner. That was not all. Djokovic opened with a double fault and an all-guns-blazing Federer pounced on his remaining offerings to take four more points.

With a break in the bag, he took a 3-0 lead. Still not done, he pulled Djokovic back from 40-15 to deuce before the Serb finally got his name on the board. That seemed to stir Djokovic into action.

He was helped not a little by a string of second serves from Federer—a dangerous offering against one of the finest returners in the game. Djokovic forced errors off the Federer backhand—a tactic he used to greater effect as the match went on—to go 30-15, but Federer at last made a forehand to level the game. He understood the threat and roared “C’mon”—rare from him at such an early stage in a match. But he followed with a forehand error and a first break point to Djokovic. Another backhand error from the Swiss and they were level.

Still Federer was full of intent, and attacked in the sixth game for deuce, but now the low, angled baseline shots of the Serb had found their groove. His forehand was as rewarding as Federer’s, and his flexible backhand was also performing. He held, and they edged to 4-4. So began the longest game of the match, and a crucial one.

Federer faced deuce not once but five times, and fought off two break points with bold tennis—now a swing volley winner, now a big serve—but in between came errors, most of them forced by great returning from Djokovic. A third break point drew just such a return and Federer netted a backhand to leave the Serb to serve for the set.

But this was a titanic struggle, and would not be done so quickly. The place erupted as Federer closed on Djokovic to make it deuce and outlasted him through a long baseline exchange to draw the required error. From one end came another high octane “C’mon”, from the other a simple raising of arms to the heavens.

This would go to a tie-break—and for Federer and his fans it must have felt like dejà vu. In his last match, he had pulled out a thrilling first-set tiebreak against Murray; in the match before, he played an error-strewn first-set tiebreaker against del Potro—and went on to lose the match.

This was a tense, tight one. The Serb attacked the Swiss backhand to take the first point advantage, but Federer came back with a winner on the same wing. He could have opened clear water with an inviting forehand, but the ball found the net. The shot of the match saved set point as Federer played a drop shot, Djokovic put it past him but the Swiss managed to angle an extraordinary volley away and pumped like he had never pumped before.

So they changed ends for a second time, but that most elegant of backhands let the Swiss down once more to concede the set, 6-8.

It had taken an hour and a quarter of high-intensity tennis, and the second set brought more of the same. Just as in the first, Djokovic opened his serve with a double fault, but this time it would take Federer six deuces and three break points, but break he did after more than 10 minutes.

The Swiss continued to attack, played the chip and charge, withstood a break point in the fourth game and had a chance of a double break in the fifth. It has gone into folklore that the serene Swiss does not sweat, but he was getting through towels and shirts by the bucketload.

Djokovic, conversely, looked the coolest man on court. Not yet for him a roar, rather a clenched fist and a piercing look at his corner.

Federer stepped up to serve for the set, looking certain to play out a third with a 40-15 lead, only for Djokovic to fix his stare, fire his forehand, and force Federer’s hand.

He broke back, just as Federer had done in the first set, at the last opportunity—and he did not need a tie-break. He broke in the 12th game to take the match, 7-5. Now he would permit himself a roar—indeed several of them.

The stats told the story of an attacker and a counter-puncher—Federer with 42 errors to Djokovic’s 28, and with 30 winners to the Serb’s 19. The Swiss made 13 winners from his 18 forays to the net, the Serb only three.

But as Federer had said both before the match and straight afterwards, Djokovic is a more complete, more destructive player than that: “Even in defence, he stays somewhat offensive. That’s what separates him from the rest a little bit…He kinda stays on the offensive, so he really takes time away from you. I think we had some great stuff out there.”

He could not have summed it up better. It was hard to see when the Serb was in defence or in attack: His movement and anticipation enabled him to transition between both. And he has learned one of Federer’s old tricks and turned it on the master: timing his attack at just the right moment for maximum impact.

He agreed: “I knew that the only way for me to really win the match is to be consistently focused and committed to every point. He’s somebody that is very aggressive, that likes to finish his points very quickly. Especially when he’s a break up, he’s probably the best player I’ve played ever against. He comes up always with his ‘A’ game when he’s up. It’s very difficult to handle that.

“But I managed to get a lot of his shots back into the court, being passive, a couple meters behind the baseline, coming into an aggressive position. That was one of the goals tonight, to always try to get him into the longer rallies where I think I had the better chance.”

In the end there was just one point between them, 95 to the defending champion, 96 to the new one—but that was enough to ensure that Djokovic can claim to be the best player of 2012—whatever the yardstick.