ATP World Tour Finals 2012: Our writer at The O2 rounds up the tournament so far in pictures, quotes and results 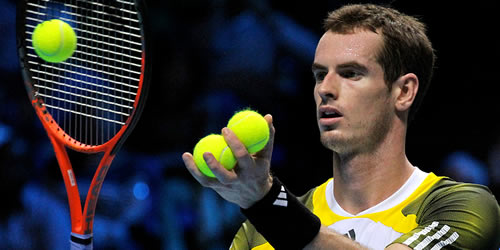 Andy Murray is among the eight players in action in London Photo: Marianne Bevis

It’s the half-way stage at the World Tour Finals, and some things never change.

Novak Djokovic has beaten Andy Murray in yet another classic, race-to-the-wire contest, and has as good as guaranteed a place in the semis.

Roger Federer has reached all sorts of records and is the first to qualify for the semis—nothing new there.

David Ferrer lost to Federer yet again—that’s 14 times—but played a storm against Juan Martin del Potro, as he has done in most of their contests and on most surfaces.

Amid the action came news from the ATP that the season-ending tournament would continue to be played in London until 2015, and little wonder. Every session has been sold out, with attendance expected to top the million mark by the end of this, the fourth, World Tour Finals at the O2.

The players love it too. Uniquely, they arrive at the venue by riverboat. They have their own locker rooms. They even have individually embroidered towels—and most of them make sure they take every one of them home in their bag!

The top man from each pool will advance to play the second man from the other pool in the semifinals, and the ranking is affected by the number of match wins, number of sets and games won, head-to-head in the tournament…the permutations are many-headed. So while Federer has qualified already, his last match against del Potro could determine whether he is No1 or No2 in this pool.

As for the Djokovic pool, ahead of their final round-robin matches there were no fewer than 10 scenarios.

Here are a few pointers, along with some photos and quotes from the biggest indoor tennis tournament in the world. 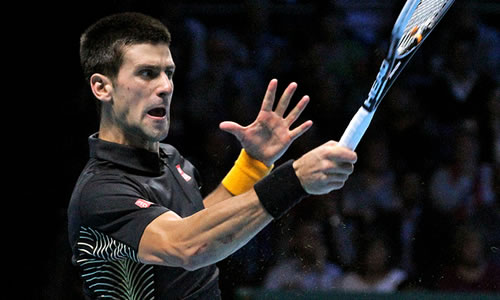 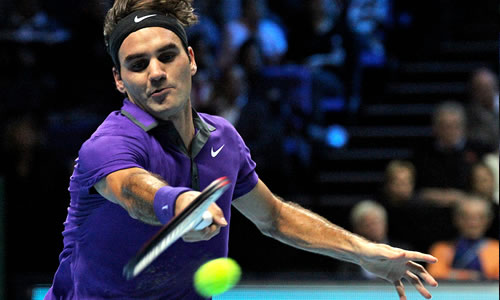 The six-time and defending champion has already qualified for the semifinals with two straight-sets wins over Janko Tipsarevic and Ferrer. His performance against del Potro may affect whether he qualifies top or second in his pool.

Federer reached a record 40 match-wins in the tournament after Round 1 and crossed the 70 match-win mark for the season with the second round win.

Federer, asked if he is feeling the benefit of missing Paris:

“Well, I don’t know. Never find out because I don’t get a chance to go back to Paris and play. [But] I’m happy that I feel fine just in time…really since yesterday I feel fine. So obviously it was good for me to start Tuesday.” 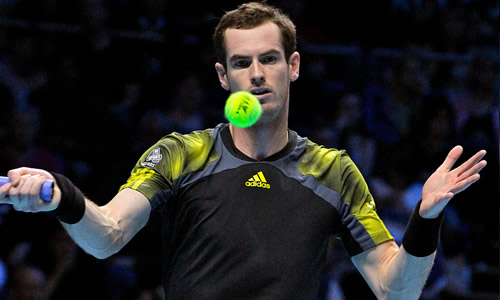 After pulling out last year with injury after one match, Murray has made no secret of wanting to end his best ever season on home soil with a good run here. He beat Berdych in three but lost to Djokovic, also in three. He needs to beat Tsonga to keep his qualification to the semis alive, and a straight-sets win would see him through.

Murray on his relationship with Djokovic:

“I think both of us probably see each other’s games pretty well. Especially this year, because we’ve played so much. You kind of know a little bit what to expect…The intensity of my matches with him have been extremely high this year. But the one thing I would say is, this year I think both of us probably have seen things in each other’s games probably improve, and that’s why there’s a lot of long rallies, and the matches are incredibly tight.” 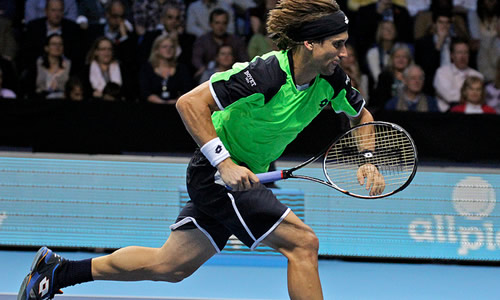 The Spaniard beat del Potro in three sets but lost to Federer in two. His progress to the semifinals, which he reached last year, will almost certainly depend on the scores he and del Potro achieve in their closing round-robin matches: If they are in a two-way tie, Ferrer will edge it on the basis of their head-to-head.

Ferrer leads the 2012 tour with 73 match wins, though Djokovic could draw level with a final round-robin win.

Ferrer on Federer, to whom he lost for the 14th time:

“I think he has a very good slice and very good serve. It’s very difficult for me to serve to Roger, no? Maybe with the other players I can receive better. And Roger I can’t do…He’s very good, so maybe the difference with him is because he’s better than me, no?”

And Federer’s view of the only other man aged 30 or more in the tournament:

“Again today, I think Ferrer showed why he’s so tough to beat. He makes you hit the extra shot, he makes it physical. You know that mentally he’s not going to go anywhere. That’s why he has so much respect from his fellow competitors…I think this is really the time for him right now where all his hard work is starting to pay off for him…I think now in particular he can shine and prove to not only you guys, but also I think the other players, how tough he really is.” 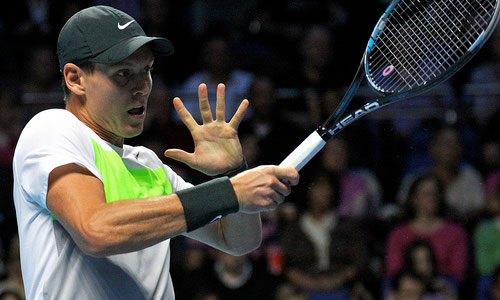 The big Czech may have lost in three to Murray, but he looked very strong in beating Tsonga, also in three. He has to put in a top-notch performance against Djokovic to stand a chance of beating Murray to qualification for the semis, but he came close last year, losing in a third-set tie-breaker.

Berdych, on emulating his female compatriots, who won the Fed Cup, in the upcoming Davis Cup final.

“I think the girls are quite used to that, to win. They did it already twice in the two years. They just give the turn to us. It should be our team who is going to…make the Czech tennis really the best possible year ever to happen. So, you know, we will try to definitely do that, try to fight for us, for the country, try to bring the trophy after 32 years back home.” 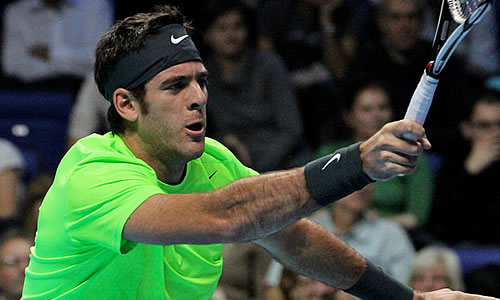 Possibly the dark horse of the tournament, he won two indoor titles ahead of London, including his first win in seven attempts this year over Federer. He beat an ailing Tipsarevic with ease, but was beaten by Ferrer in three. His concluding match against Federer could be very influential: earn him qualification for the semis and determine whether Federer finishes top of the pool or second.

Del Potro and on facing Federer for the eighth time in 2012:

“I need to beat Roger once again, it’s going to be a different match like 2009 here, but also is going to be a special match for me. Could be my last match in this season, so I will try to play similar to the finals in Basel, trying to be more aggressive than him all the time and see if I have little chance to beat him.” 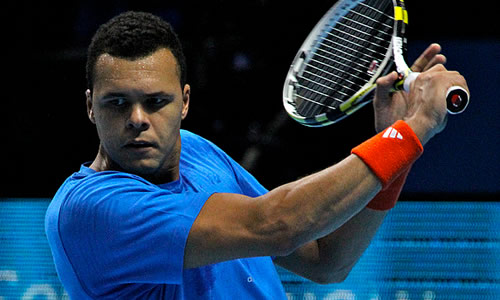 The Frenchman who reached the finals last year, looks in danger of failing to qualify this year. He lost to Djokovic in two sets and Berdych in three. How he performs against Murray may have a greater impact on the Briton’s fortunes than on his own. Only one of the 10 possible scenarios sees him qualify: Djokovic has to beat Berdych in straight sets, and he has to do the same against Murray—and the Frenchman has beaten Murray only once, back in 2008. 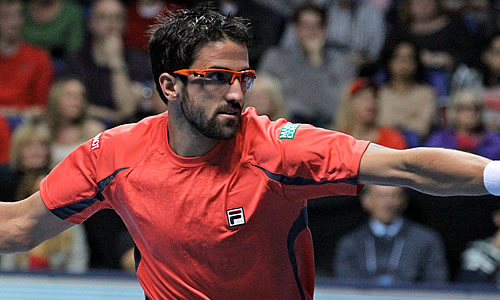 The Serb came to London as alternate last year, and took Murray’s place for two matches—beating Djokovic for the first time in his career and losing to Berdych in a final-set tie-break. Playing right up to Paris to qualify, he has been coping with the after-effects of a virus, losing quickly to both Federer and del Potro. His rackets came out in sympathy in the latter match: Despite its shortness, he had strings go in four rackets.

Tipsarevic, asked about his performance so far:

“I would like to thank the fans who are supporting me despite my tennis…But, it’s sad to say, but this is the best I can do right now.”

…And added, when asked about wearing glasses:

“Even though you can really not see it in the last two matches, [my glasses are] really helpful.”