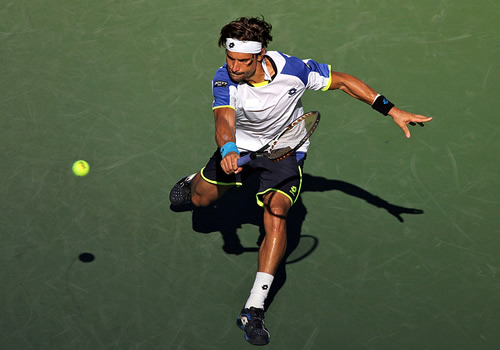 A quarter-final finish in the Beijing 500 last week has ensured that world No4 David Ferrer is the latest to qualify for the ATP World Tour Finals for his fourth consecutive year.

He becomes the fourth to qualify for London, joining Rafael Nadal, Novak Djokovic and Andy Murray in the eight-man season finale at the O2 arena at the beginning of November.

It will be Ferrer’s fifth appearance at this prestigious year-end tournament. He achieved his best finish on his debut in 2007, finishing runner-up to Roger Federer at the Qi Zhong Stadium, where he will play this week in the Shanghai Rolex Masters.

Ferrer said: “I’m very happy to qualify for the Barclays ATP World Tour Finals for the fifth time. At the beginning of the year, it’s always a goal to make it to London, and if you finish in the top eight, then you know that you’ve had a good season. The O2 is an amazing venue to play at and the great fans help to bring the event alive.”

The 31-year-old Spaniard has continued to build on his outstanding 2012 season by reaching a career-high No3 in the rankings this summer. He began 2013 with his third straight Heineken Open title in Auckland, won the 500th match of his career during the Australian Open, and went on to defend his Buenos Aires title. He then reached his first ever Grand Slam final at Roland Garros, losing to Nadal.

Since the 2012 Australian Open, he has reached at least the quarters of every Grand Slam, doing so for the first time at Wimbledon and advancing to the semis at both the 2012 US Open and this year’s Australian Open. Having won his first Masters crown in Paris last autumn, he went on to reach the Miami Masters final this season, losing to Murray in a final set tie-breaker.

Also taking a step closer to qualification this week is Juan Martin del Potro, whose win at the Tokyo 500 saw him leapfrog past Tomas Berdych in the race to No5. He beat another outside contender for London, the fast-improving Milos Raonic, 7-6, 7-5, to seal his third 500 title of the year: He also won in Rotterdam and Washington.

Del Potro continues his London campaign with the other men-in-waiting in Shanghai this week. He has a bye in the first round and could then play the No23 ranked Philipp Kohlschreiber in a very tricky opener.

But as well as moving up the Race rankings, Del Potro has jumped two spots to No5 in the calendar rankings. That takes him to just one place short of the career high No4 he reached at the start of 2010 when he was hit by a wrist injury that took him off the tour after the Australian Open. He played just two more matches that year and dropped outside the top 300 at the start of 2011.

Since his return, he has won nine titles and the Olympic bronze medal in London 2012. This year, he reached a first Wimbledon semi-final and his first Masters final, Indian Wells, since 2009.

The race to London