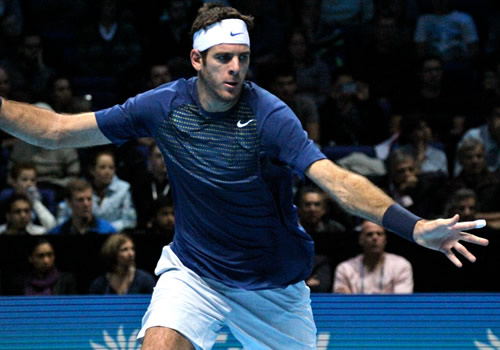 As soon as the draw was made, and the last to qualify, Richard Gasquet, was dropped into the same group as Novak Djokovic, Roger Federer and Juan Martin del Potro, he became the ATP World Tour Finals underdog.

He had only won two matches out of 12 against Federer, only one from 10 against Djokovic and the story against the youngest man of the eight in London was no more encouraging. Six times he had played del Potro, and Gasquet’s only win came in their first meeting, more than six years ago.

Gasquet, who hit the tour between the eyes as a 20-year-old and qualified for the only previous time for the season finale a year later in 2007, was the reserve player here last year, and that spurred him on to greater efforts after a slide in confidence and rankings:

“Last year I saw the wonderful stadium. All the time it was full. It was important for me to qualify this year. It was my goal at the start of the season. So I’m here, and I’m proud to be here with all these great players. I will try my best to play well.”

He talked of the parts of his tennis that he had improved, and greater aggression and physical endurance were clearly key in reaching his target, via three titles this year:

“I am trying to improve all my shots, to go more to the net, to be stronger physically and mentally, and serve better.”

There were factors in the del Potro campaign that might just have worked in Gasquet’s favour, too. The Argentine had played a lot of tennis ahead of London: since the start of October, he had won Tokyo and Basel and reached the final in Shanghai—and then reached the quarters in Paris. On top of that exhausting schedule, he had suffered the misfortune of having his bag and precious contents such as his passport and rosary, stolen as he left Paris.

Gasquet was quick to strike, too, showing that new aggression by time and again stepping inside the baseline for a fast return of serve. He has one of the most elegant and deadly backhands in tennis, and his slice and touch around the net are important weapons against the big and less nimble del Potro.

Gasquet got the first break, only for del Potro to hit straight back, using his most lethal weapon, his hefty forehand. They would head to a tie-break, normally a gift to the big-hitting del Potro. But it was Gasquet who got the first advantage, 5-3, only to see a Gasquet-like delicate drop shot winner from del Potro. But the Frenchman also turned the tables, playing a del Potro-esque cross-court return-of-serve winner and he took the set, 7-4.

Despite the del Potro serve sinking to a 50 percent level in the second set, he dropped only one point on his first serve and hit quickly with a break in the fourth game that Gasquet could never recover, though his intensity was impressive: The set was closer than the 6-3 scoreline suggested.

The Argentine now seemed to have control of the situation and served for the match at 5-4. This would normally be a clutch situation for del Potro but a combination of fatigue with an inspired few points from Gasquet, took the match well beyond the two hour mark.

The Frenchman played an audacious drop-shot return of serve, lobbed the next ball and smashed the last for 0-30. So much running in defence took their toll on del Potro and he double faulted to offer up three break points, and another weary netted volley levelled the match, 5-5.

The grit—and deceptive energy levels—of del Potro would not give in. He broke one more time and made no mistake in serving out the match, 7-5.

It could prove to be a bitter pill for Gasquet to swallow: He may not come as close to a win in this section again. But he could not be faulted on his tactics—he made 20 points out of 25 net approaches. He certainly proved he was no underdog in this tournament.

Del Potro, as always, charmed the crowd afterwards: “I had a great Wimbledon, a great Olympics here: I always seem to play well in London—I want to show my best tennis to you.”

It may not have been his best but it was solid and determined—and put one win in his World Tour Finals bank.