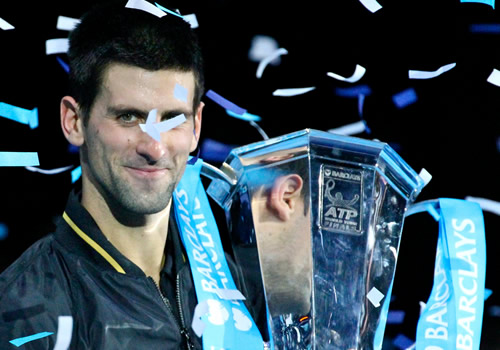 Novak Djokovic believes the ATP World Tour Finals should be held in different cities around the world more often.

The season-ending tournament has been staged at The O2 in London since 2009, and will continue to do so until at least 2015.

“I’ve said before, I think this tournament should be organised at different places more often, and not be held in one city for more than three years,” said Djokovic, who faces Roger Federer in his opening group match on Tuesday.

“It’s in the ATP’s hands to think about [it] because of the promotion of tennis, having it in places where maybe tennis isn’t as popular and if we are looking to expand, then we should look at allowing other cities to compete for holding this tournament.”

Rafael Nadal, meanwhile, has expressed his desire to see the ATP change the surface of the season-ending tournament.

“I feel that I am unlucky,” said Nadal. “Since 2005, all the Masters [Cups – the previous name for the World Tour Finals] have been indoors on a surface that is not the best for me.

“I cannot find a better place to have a Masters than here, because the stadium is one of the best stadiums that I ever played in.

“But that doesn’t mean the ATP cannot be a little bit more fair to all the players. We qualify on all the surfaces, so it would be great to change the surface every year.”

Djokovic believes the answer is not as simple as it may seem at first glance.

“I think the question is more complicated than just surface itself,” said Djokovic.

“ATP is the one that makes a contract with a certain city. They made their first contract with London for five years, in November, and we all know how the weather is here so the logical solution is going to be indoor.

“And that already give us few options on what surface we play, because indoor clay is also a very difficult, very demanding surface to make.”