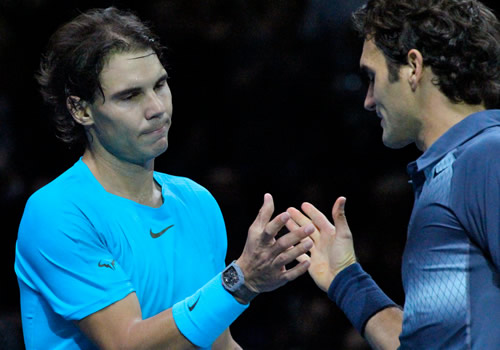 Rafael Nadal is through to the final at The O2 Photo: Marianne Bevis

This time last year, in this place at this tournament, the picture was very different for the two pin-ups of tennis.

Rafael Nadal had been missing from the tour since Wimbledon 2012 with knee injury and there was still no firm sign of when he would return. It would not be until after the Australian Open, and he would slip to No5 before making an extraordinary comeback to dominate the tour by year’s end: 10 titles and a 74-6 winning record that included a remarkable unbroken hard-court run through Montreal, Cincinnati and the US Open

Roger Federer was in London as defending champion and in pursuit of his seventh ATP World Tour Finals title. He had the Wimbledon title and had only recently broken the record for weeks as world No1—though Novak Djokovic would pip him to 2012’s year-end top spot and the London title.

Fast forward to November 2013, and Federer had dropped to his lowest ranking in 11 years, No7, after a difficult year of back injury, a shock Round 2 loss at Wimbledon and just one title to his name in Halle. He was even uncertain of his WTFs place until the week before the tournament began, sealing a top-eight spot with an autumn run to the Basel final and Paris Masters semi.

So athough Federer had met and beaten Nadal in all four of their year-end meetings—most recently in the 2010 final and in a 6-3, 6-0 rout in 2011—Nadal had beaten Federer in all three of their 2013 meetings, two of them on hard courts. And in the on-going debate about the superiority of the two in the ‘tennis hall of fame’, Nadal’s 21-10 head-to-head record over Federer remained to the fore.

Federer himself, regarded as perhaps the best player of his era indoors, regarded Nadal as the favourite in this their fifth indoor meeting: “I just have to have the right mindset to give it one last go, maybe play with a little less pressure than I have in previous matches with him. I don’t know. I just feel like I need to look at it more as being an underdog a little bit because of circumstances, because of my year, because of his year. Maybe that free swinging is what I kind of need to do a little bit more. I mean, we know each other that well. He’s going to do exactly what he needs to do, I’m going to try to do what I need to do. Hopefully it’s going to match up good for me. If not, he deserves it. He’s had a wonderful season.”

But whatever else the match held, it would certainly deliver the kind of star-appeal that other sports dream of, for there has been something special about these two since they first met almost a decade ago.

Few will recall that match, an early round in Miami: Federer already world No1, the teenage Nadal a lowly 40—but the new kid on the block stormed the win, losing just six games.

One year later, they met in the same place. Now it was the final, and this time Nadal was just months from taking the No2 ranking that he would hold behind Federer for more than three years. The match took three and three-quarter hours and five sets—two of them tie-breakers—before Federer won the 2005 Miami title. It marked the true beginning—and set the tennis standard—of the rivalry of a generation.

Never again, until this exceptional year, would they meet before a semi-final, and fans seemed never to tire of their rivalry, even though Nadal’s with Djokovic had overtaken it in simple numbers. For everything about the Roger-and-Rafa rivalry has always thrilled: In style of play, in appearance, in personality, they complemented and contrasted, yet seem genuinely to like as well as respect one another.

That showed in a rare moment at the start of the match when, with the member of public selected to carry out the coin toss despatched, the two men took a photo call on their own. Yes, this is a special rivalry, a special relationship.

It started in fine form, too, with both playing clean tennis, serving strongly, dropping few points. Federer faced deuce in the third game but otherwise, each held serve with ease.

Nadal was the first to come under pressure, though, despite barely missing a first serve. Federer got one break chance, then another, and a third, but he could not convert any of them, even with his consistently offensive tactics.

Still Federer’s serve remained unscathed, with an ace punctuating a love hold, but Nadal did the same, and at the key moment, 4-4, Federer faced his first break points. He began with an ace but then fired his first—and only—double fault, could not find a first serve, and Nadal took four straight points to break.

Just as it had against Juan Martin del Potro, Federer’s tennis blew hot-and-cold. A flash of the hot came as Nadal served for the set: Federer withstood the Spaniard’s baseline pummelling to earn a break-back point, and he took it for 5-5—only for his first serve to desert him in the next, and Nadal broke again. This time, Nadal was as solid as a rock, serving out with four straight first serves to love, 7-5.

The contrast between the impenetrable baseline game of Nadal and the attacking, risk-taking tennis of Federer was clear. Nadal had made only two winners to seven errors: Federer had made six winners but an unforgivable 17 errors.

The second set was not much different. Federer began serving cleanly, while Nadal defended deuce in the second game. But in the fifth game, Federer made an error on the opening point, was twice passed by Nadal as he attacked the net, and could not withstand the attack to his backhand wing. Nadal broke, and despite a love hold next time around, the damage was done.

Federer looked furious with himself, made a couple of reckless attacks to the net on Nadal’s serve, but this time could not reclaim the break. Indeed, by the end of the match, he had made just five points from 11 net plays. Instead, Nadal broke again to take the match, 6-3, after just 79 minutes.

Federer, into press within minutes, affirmed that, like Del Potro the night before, Nadal had been much the more consistent:

“I very rarely go through matches where I have no chance and no opportunities. This game is a game of making or missing your opportunities. Today was a little bit more of that, again.”

Still he remained upbeat, as he usually does, about next season: “I think something’s possible for next year. I think it was a stronger finish than I thought it was going to be in Basel, Paris and London. I’m more positive now looking ahead than I would have been a few months ago where I wasn’t quite sure what to expect after the US Open. But, I’m back confident and excited going into the off-season and starting again next year.”

For Nadal, this was another step in one of his finest ever years, a 75th match win and his first over Federer indoors and at the season’s finale. He has to win just one more match to capture the one big title that has eluded him—and should now be hugely confident with this win under his belt. Not that he would allow himself the luxury of admitting it:

“Most important thing for me is in the toughest surface for me to play, most difficult one, for me was able to win four matches against top-eight players. That’s great news for me. Is a very good way to finish the year. Now remain the last match. I hope to be ready for that. I know gonna be difficult one. But will try my best. I need to play my best match to have a chance tomorrow against both opponents, and I will try. That’s all.”

He will play either Djokovic or Stan Wawrinka in the final tomorrow evening but, once again, would not be drawn:

“Favourite is Novak. Wawrinka is the kind of player that if he has his day, is very dangerous for everybody. So Wawrinka can win, yes. The favourite is Djokovic. It’s that’s that simple.”

How ironic it would be if he were to face another Swiss in his second final here, just as he did when he lost the 2010 final.

Rafael Nadal: It’s been a very emotional year for me