ATP World Tour Finals 2013: Rafael Nadal will end the year as No1 after beating Stanislas Wawrinka in straight sets 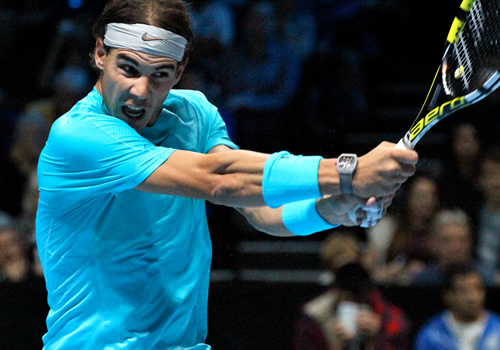 Rafael Nadal will finish the year as world No1 Photo: Marianne Bevis

All it needed was one more match win and Rafael Nadal, who missed the season finale in London a year ago, and dropped to No5 in the world soon after, would be 2013’s year-end No1.

Such has been the come-back from his seven-month layoff with injury—and he only began playing again at the start of February—that he claimed the ATP’s Comeback Player of the Year Award this week.

And it has been extraordinary: 13 finals from 16 tournament appearances, leading to 10 titles, and not just any titles. He took a record eighth French Open, his second US Open and a record-equalling five Masters titles—in the space of nine months. By the start of October, he had overtaken Novak Djokovic to claim the No1 ranking.

Such was his lead over Djokovic that if the Serb was to take the year-end No1 ranking, he needed to defend his title here and then win both his Davis Cup matches later this month, and even that would not be enough if Nadal won any two matches here. And the Spaniard made swift work of the first hurdle, a resounding 6-3, 6-2 win over David Ferrer, only a couple of days after losing to the same man in Paris.

Now he had only to beat the No8 ranked Swiss, Stanislas Wawrinka and the job was done—for the No1 ranking certainly, and for a guaranteed semi-final place if he won in straight sets.

And Wawrinka did not sound too optimistic about beating Nadal: Perhaps not surprising, as he had failed to do so in all 11 previous matches, including the quarters in Shanghai last month. He had not even won a set.

“I think it’s the best surface to play him, for sure, but I played him in Shanghai. Was quite fast, the centre court. He was playing again better than me. For sure he’s a much better player than me. He’s No1 in the world. He had an incredible year. Doesn’t matter if I play him indoors or outdoors, it’s going to be a tough match for me.”

That said, 28-year-old Wawrinka has enjoyed the best year of his career, reaching a career-high No8 to qualify for the World Tour Finals for the first time, and scoring a career-best 50th match win over Berdych in his opener here.

Since taking up with coach Magnus Norman, the Swiss had become stronger, fitter and a more complete player, good enough to twice take Djokovic to five sets in Grand Slams, and good enough to score eight victories over top-10 players this year. That he was prepared to acknowledge:

“I think I improve my forehand this year, that’s for sure. In general, I think I’m dealing much better the pressure. Even when I’m nervous, you don’t see it. I keep my level. I keep my intention on what I want to do. Then I have the chance that I can do a lot with my game, so I can always change a little bit my game to find many different solutions. When I feel good on the court, then for sure I’m moving well.”

It proved to be one of the tightest contests of the tournament so far, a cracking, drama whose outcome was uncertain until the last ball.

Both opened strongly but it was Nadal who broke first, and when he held his own serve to love, it looked as though this may over in pretty simple style.

But Wawrinka was only just getting started. He fought off a break chance on his next serve with two bold serve-and-volley plays, but could he stop Nadal serving out the set? The answer, to the delight of the crowd, was a resounding yes.

He almost broke in the eighth, thwarted when a net-cord took his backhand wide. But at the next attempt, he stood toe-to-toe with Nadal in a glorious long backhand exchange. It brought up break point, Nadal was handed a time violation warning, and Wawrinka pounced to break.

That seemed to get the Swiss blood pumping. He made a stunning love hold of serve, hitting one delivery at 137mph, and Nadal took it to a tie-break.

Even in this mini match, the two were locked point by point. But the first to reach set point was Nadal, and he took it for the set, 7-5.

Wawrinka was beside himself, smashed his racket on net, umpire chair and for good measure at the court-side hoarding. Whether he was aware of it or not, he had scored just one point fewer than Nadal, 39 to 40—the set point itself.

But Wawrinka cleared his head and dug in for another battle, starting with another 137mph serve. This time, he was first to have a break chance but his usually reliable backhand misfired twice and the chance passed. He was punished swiftly, too, as Nadal forced a series of errors to break in the fourth game.

This had the makings of a repeat of their last match in Shanghai, where Nadal took the opening set tie-break and raced to a 6-1 win. This time, he was 4-1 up but, on an opportune break point in the seventh game, Wawrinka hit a cross-court volley, it clipped the net and went for a winner.

Again, the Swiss was revitalised by his break, and serve-and-volleyed his way to a hold, 4-4, and to a love hold, 5-5. At precisely two hours, it would head to a second tie-break.

And although Nadal raced to a 3-0 lead, the Wawrinka backhand came to the Swiss rescue and he edged his way back to level terms—and all the way to 6-6. Wawrinka hit a return of serve out and Nadal snatched his chance to take the match.

In one shot, he sealed not just his place in the semi-finals but the year-end No1 ranking for the third time in his career. He becomes, as a result, the first player to hold, lose and regain the year-end No1 on two occasions. He returned to the top on 7 October for the first time in more than two years after reaching his 13th final of the year, more than five years after he first achieved the feat in August 2008.

Despite assuring the media before the tournament that reclaiming the year-end accolade was not his priority, he admitted now that it one of the greatest achievements of his career:

“Today was important to secure the No1 at the end of the season. Because during all my season, I said is not my goal, but the real thing is after all the success I had, winning five Masters, playing a final in another, winning a few 500s, playing another final, winning two Grand Slams, so I think that after all what happened last year, I felt I deserved to be there at the end of the season. And today I did.

“So was one of the best things that I did in my career: come back to the No1 after three seasons. That’s an emotional thing for me, for sure. To qualify for the semi-finals is an extra thing, and the good thing is after two matches, I can really be focused only on the tournament because the year-end is over.”

For Wawrinka, though, this loss was a tough one to swallow. By the end of two-and-a-quarter hours, he had actually won more points than his opponent: 83 points to 80.

“It’s a strange feeling right now. I need to be careful with what I’m going to say because at the end of the day I need to take the positive from the match. But I’m for sure really disappointed. I had so many occasions, [but] had the feeling that I couldn’t change the match, I couldn’t change the score. I was playing the right tennis, but maybe did a few mistakes in the important points.

“But at the end of the day it’s Rafa in front. He’s the No1 player. It’s so tough to play him. That’s why he’s so good, because even when you play good tennis, your best tennis, he’s still there, still trying to find a way to win it.”

And that is, and has always been, the X-factor when it comes to Nadal. He will not give up a single point until he has sweated every last drop from his body.

The positive news for Wawrinka is that he can still qualify for the semis with a victory over the other man in the group, David Ferrer. All will be revealed on Friday.