ATP World Tour Finals 2013: Richard Gasquet insists he is in confident mood heading into his opening match in London 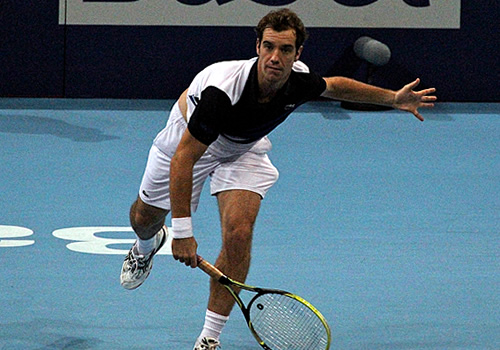 The Frenchman is competing at the season-ending tournament for the first time since the event was held in Shanghai back in 2007, when he lost at the Round Robin stage.

The 27-year-old has enjoyed an impressive 2013, reaching the semi-finals of US Open for the first time – only his second appearance in the last four of a Grand Slam.

“Last year I saw the wonderful stadium. All the time it was full. It was important for me to qualify this year.

“It was my goal at the start of the season. No I’m here, and I’m proud to be there with all these great players. I will try my best to play well.”

Gasquet concedes that he is the underdog heading into his Round Robin opener against Del Potro on Monday.

“Of course he will be the favourite for the match, but I have nothing to lose,” he said.

“It will be a great match for me. It’s an exciting match for me and a big challenge to play him.

“I know he’s a great player but I will try to play well and win the match.”

ATP World Tour Finals 2013: Tomas Berdych thrilled to be back