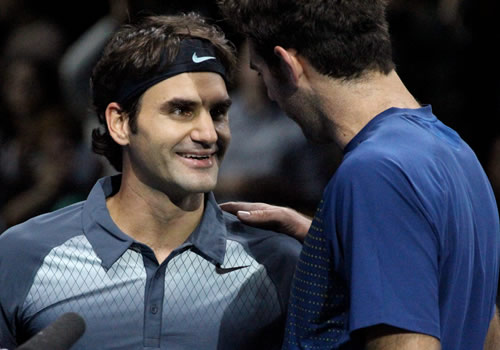 In the end, the final place in the semi-finals of last tournament of the year, the prestigious ATP World Tour Finals, would have nothing to do with round-robins, with sets or games or points won during the course of three matches.

The victor would be decided, in the best Grand Slam knock-out tradition, by a single, last-man-standing contest.

Roger Federer and Juan Martin del Potro had each lost to top-of-the-table Novak Djokovic in three sets and each had beaten Richard Gasquet, Federer in two and del Potro in three sets.

But this was not any knock-out contest. These two men, friends off court, have developed one of the most fascinating rivalries on court since their great five-set contest at the French Open in 2009. Federer won that encounter but would lose their next, the final of the US Open the same year, in another show-stopping five-setter.

By last summer, the Argentine was back from wrist surgery to challenge Federer again in yet another five-setter at Roland Garros, and was followed by a 19-17 final set at the Olympics—both wins going to Federer.

But in Basel just three months later, Del Potro edged Federer’s home title in a final set tie-break and went on to beat him in three again at this very tournament, also in the final round-robin phase.

This year, their rivalry remained just as close, just as intense. Del Potro again won the Basel title in a three-set final but, a week later, Federer avenged the loss—over three sets, of course—at the Paris Masters.

It was a particularly timely win: Federer had scored just one win over a top-10 player in 2013 and only one over his seven London rivals—until Paris. He affirmed as much ahead of this third meeting in consecutive weeks:

“I think the win in Paris was big for me, because he did beat me three times indoors straight, the Basel finals twice, and also here last year…I’m glad I got one back in Paris because I knew we could be again in the same group, we could be playing each other. Think that win for me in Paris psychologically was very important. I could beat top 10 guys: I beat Richard [Gasquet], I beat Juan Martin last week. I truly believe my confidence is higher, and that’s what I need to beat the best, and Juan Martin is part of that group.”

Working in the Swiss man’s favour, perhaps, was the amount of tennis that the Argentine had played in recent weeks: Titles in Tokyo and Basel, final of the Shanghai Masters and the quarters in Paris. He had also played two three-setters here, but in the opening stages of the match, none of that seemed to matter.

He took advantage of a nervy Federer, who made numerous errors in the opener to offer an immediate break, and served soundly himself. Del Potro showed his increasing athleticism, too, chasing across the baseline and racing the net to finish when Federer drew him in.

Federer then gave up a 40-15 lead in the fifth game, losing five straight points, to be broken again and found himself at 5-1 before the Swiss gritted his teeth and fought his way back—first with a love hold, then a love break, and then an aggressive net-attacking game to reach 4-5.

Already the crowd could barely contain its excitement, but when Federer teased and powered, sliced and diced his way to another break point with a winning lob, the arena rocked. Del Potro saved it with a big serve, as he did the next and a 134mph ace held for the set, 6-4.

In the second, Federer served first and continued in the same vein with an easy hold. But shockingly, he gave up another easy break in the third game as his first serve vanished. It was all the more surprising because he held the next to love and then broke to love, now playing the kind of all-court, flamboyant tennis for which he is loved.

They edged game by game to a tie-break, and still the Federer tennis flowed as he took the first point against serve with a volley winner and aced his way to 4-1. Del Potro scored only one more point: Federer levelled the match, 7-2.

And still the match switched from one man to the other as each grasped the momentum. Yet again, Federer was broken quickly, courtesy of a netted forehand and Del Potro led 3-0. And yet again, he claimed back the break at the next attempt, as both men indulged the crowd with some glorious baseline exchanges, with whispering, low cross-court slices, changes of pace on the forehand, and all headed to the sidelines.

As before they edged neck and neck, now Del Potro with the serve advantage taking the lead, now Federer closing it again. If ever there was a test of the Swiss nerve and his confidence, this was it. In the event, it was Del Potro, whose serve became slightly less penetrating, and Federer picked it up for some ripping returns to the big Argentine’s feet.

It brought one last break, though there was drama to the bitter end as Del Potro unleashed his signature cross-court forehand to bring up break point. But returning to the tried and tested tactics, Federer sliced the ball to each wing, threw in some changes of pace, and drew the error from a weary pair of Argentine knees. Federer had the set, 7-5, for a very emotional win.

It is the Swiss, then, who survives the latest in their series of gripping tussles. As always, they embraced warmly at the net, but one sensed that the victory for Federer was a very important one indeed, proof if it were needed that his fitness and his confidence are returning after a disappointment-littered 2013.

He has very little time to recover—about 21 hours—and then he plays in the semis one of the biggest challenges he has faced in his career: Rafael Nadal. The Spaniard holds a 21-10 lead over Federer, including all three matches this year.

However, all four matches they have played at the end-of-season finale have gone to Federer, most recently in the 2010 final and a 6-3, 6-0 rout in 2011. But Nadal is these days a better hard-court player. His serve, his net-skills and his slice were all on show in the face of a severe test against Tomas Berdych.

Federer was certainly pragmatic about what lay ahead:

“I just have to have the right mindset to give it one last go, maybe play with a little less pressure than I have in previous matches with him. I don’t know. I just feel like I need to look at it more as being an underdog a little bit because of circumstances, because of my year, because of his year. Maybe that free swinging is what I kind of need to do a little bit more tomorrow. I mean, we know each other that well. He’s going to do exactly what he needs to do, I’m going to try to do what I need to do. Hopefully it’s going to match up good for me. If not, he deserves it. He’s had a wonderful season.”

And then he revealed his secret weapon, the second Swiss in the semis, Stan Wawrinka, who would play Djokovic:

“I think we’re gonna speak to each other a little bit later and I’ll tell him a few things that I know and he’ll hopefully tell me a few things he knows this week about the players we’ll be playing.”

But in fact, he seemed as delighted for his friend Wawrinka’s success as his own: “I don’t know if I’m more excited that I won or we’re both in the semis, to be honest. I’m very happy for Stan. I think he’s had a great season, an amazing, tough match with Ferrer. The way he was able to turn it around and get the victory was beautiful.

“I was hoping to be there, too, make both of us get to the semis. Here we are playing the best two players of the season. I think it’s incredibly interesting for the two of us, for Swiss tennis, for the Swiss media. Historical, absolutely.”

Will the Swiss continue to roll? Will they make an even more historic all-Swiss final? We wait on the edge of our seats.

Rafael Nadal: It’s been a very emotional year for me