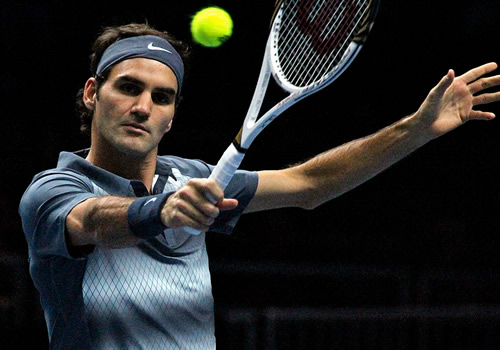 Roger Federer may have lost to Richard Gasquet only twice in a dozen previous meetings, but the match they were about to play may have been one of his most significant.

Already the Swiss had been one of the last to qualify for the tournament in which he had featured for 12 consecutive years and won a record six times. He was ranked, at No7, at his lowest since his 2002 debut in the competition, and only two places higher than Gasquet, whose outstanding season had taken him within touching distance of his own career high No7 back in 2007.

The first of those two wins for the Frenchman with so much flair came as Federer was beginning to ride his peak in 2005, a stunning performance in a glorious match of attacking, all court-skill that went to the then teenage Gasquet in a long final-set tie-break on the clay of Monte-Carlo.

The second was on the very similar surface of Rome in 2011: Another close three-setter, another decided in a tight tie-break.

But on hard courts, Federer had always won, and while Gasquet’s three victories this year had come on hard surfaces—his most recent, indeed, on the indoor hard of Moscow—Federer was favoured to win again.

But in a difficult season for the 32-year-old Swiss, hampered by back problems and a loss of confidence from a loss of matches, victories had become less predictable. He also found himself, for the first time since another back-hampered Masters Cup in 2008, with an opening-round match-loss to Novak Djokovic. So he needed this victory if he was to keep his hopes alive in the tournament. But so did Gasquet.

Federer insisted he was still optimistic:

“I think at this point it’s very mental, just making sure I don’t get too negative on myself because of the loss. I mean, it was against Novak after all. It’s not against some journeyman.

“I feel like it was very close…It’s a positive that it was three sets. I just have to make sure I stay positive right now in my mind, which I am…I think I have to just make sure I take it to my opponents rather than trying to make the plays too often, what I was trying to do today.”

But Gasquet had nothing to lose: This was his first ever appearance at the tournament, he playing some of the best tennis since that first meeting against Federer, and he was loving every minute.

This was one that the fans would relish for every minute, too. Both men are renowned for beautiful single-handed backhands, both have great touch, disguise and variety, and can flatten out the ball with spin before opening up with crisp down-the-line winners.

Add in that both play fast, step in to serve with little hesitation, and the points and games race by, packed with content. Little wonder, perhaps, that long before Grigor Dimitrov came along, Gasquet was touted as the next Federer.

The Frenchman opened strongly on serve, and then pressed Federer with some rousing cross-court backhand exchanges, long and probing and forcing a first error from Federer.

But the advantage has so often gone to Federer in their matches because of his attacking mind-set. He detected that Gasquet was well behind the baseline—as he would do on many occasions—and he made the first of a series of delightful drop-shot winners. The Swiss man broke to lead 3-1.

The sixth game displayed the full range of the Federer magic: now a forehand winner, then a serve winner, and drop winner to hold to love.

But Gasquet’s results this year have come in part from a reclamation of the attacking game that took his into the top 10 all those years ago. Helped by a patchy service game from Federer, Gasquet broke to level 4-4, but then fell foul of another Swiss net attack and lost his serve again. A confident love hold, and the set was Federer’s 6-4.

The difference in approach was written through the stats: the safer Gasquet had made only six unforced errors but also only four winners. Federer, the bolder, had 12 and 13 respectively.

Federer was quick to press his advantage in the second, as well, as more net work broke a frustrated Gasquet with ease. The Frenchman groaned as, two metres behind the baseline, he saw a sweet drop-shot fall well beyond his reach.

But all credit to the Frenchman. Even though he came off the worse in one of the rallies of the match—volley, retrieval, lob, aggressive chase-down and a final volley winner to Federer—he went on the offensive at last.

While Federer’s forehand may be stronger than Gasquet’s, the Frenchman has the superior backhand, even in some exquisite sliced cross-court exchanges.
He came within a hair’s breadth of breaking Federer in the fourth, earning two break chances by coming to the net, but yet again was beaten by a drop-shot: Federer held for 3-1.

And the pattern continued, in a set that proved tighter than the opening minutes suggested. Federer faced break points on his next two service games, too, as Gasquet’s backhand opened up the court. Federer responded by going for the lines. Sometimes he missed, sometimes he didn’t: He was living dangerously but survived.

He went 5-3 with a remarkable defensive winning lob followed by an ace, and had by now stacked up 16 winners from 20 net plays. But then he passed up no fewer than five chances to break for the match—a luxury that he will be unable to afford when it comes to his deciding match on Saturday. On the sixth, Gasquet’s defences were finally broken with one last error. Federer broke for the match, 6-3.

So Federer’s place in the semis in London may now come down to a one-match shootout against Juan Martin del Potro. A very dejected Gasquet left court to a huge cheer but with barely a wave: He knew his campaign was over despite having one more match to play.

Federer talked of Gasquet’s game with great warmth, seeing perhaps the aesthetics in the Frenchman that his own fans so relish.

“He’s got incredible playing style and beautiful shot-making…Richard does a good job of making you feel uncomfortable as well because he uses heights, spins really well. He likes extended rallies. I’m trying to force the issue.”

He also admitted that things needed still to improve:

“The movement, the coordination is not exactly how I want it to be, you know. Sometimes I’m in two minds. But that’s where I think today was just a battle for myself, making sure I move the right way, I play the right way, I have the right shot selection. Maybe also just getting used to the conditions a little bit.

“I think the win in Paris [against del Potro] was big for me, because he did beat me three times indoors straight…I truly believe my confidence is higher, and that’s what I need to beat the best, and Juan Martin is part of that group, obviously.”

But there’s a long way to go in the competition, not least del Potro’s match against Djokovic, which could change entirely the qualifying scenario for Saturday.

ATP Awards: Federer ‘overwhelmed’ by support of fans and peers