ATP World Tour Finals 2013: Stanislas Wawrinka admits his delight at getting off to a winning start after victory over Tomas Berdych 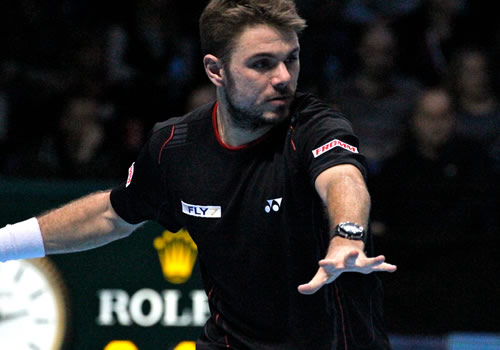 Stanislas Wawrinka admitted his delight at getting off to a winning start at the ATP World Tour Finals after a three-set triumph over Tomas Berdych.

The Swiss took the first set at The O2 in London but a battling Berdych fought back to take the second on a tie-break.

However, Wawrinka, playing at the season-ending tournament for the first time, impressed in the decider and clinched a 6-3 6-7 (0-7) 6-3 victory in two hours and 25 minutes.

And the 28-year-old was thrilled to win his first match at the tournament.

“I enjoyed it a lot, especially with the victory today,” said Wawrinka. “My first impression was that it’s really, really nice to be here.

“I saw the tournament so many times on TV. To play in it is something different. To win my first match here was something really special for me.

“It was really good atmosphere. It’s always nice to play in front of such nice people. There was a lot of Swiss people. Yeah, for me it was really, really nice.”

Meanwhile, Berdych felt that there were fine margins between the two players on Monday.

“It was very close again,” said Berdych. “It’s been really about the small chances. Stan was better in actually executing the chances.

“I think it was nearly the same. He had four breakpoints and made two. I had five and made zero. I think that’s was the big difference today. It was a very close score in the end.”