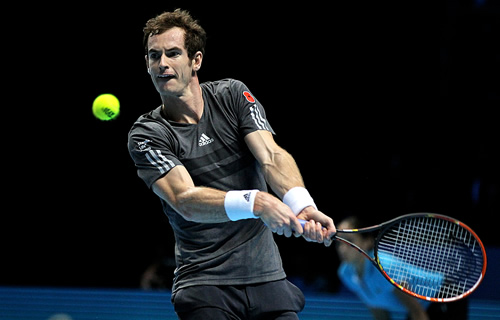 It was a long and arduous fight to get here for the man who has won Olympic gold and the Wimbledon crown on home soil, but with three titles from six back-to-back titles in the run-up to the year-ending finale, Andy Murray made it with room to spare, winning 20 of his last 23 matches.

The Briton, who has qualified for the Championships for the seventh consecutive time, missed last year after undergoing back surgery, but has three times reached the semi-finals in this most prestigious of tournaments.

If he was to go one step further—or perhaps even two steps further—he faced some very contrasting challenges in his group. Along the way, he would have to play Roger Federer, in his 13th straight end-of-year Championships and a six-time champion.

On paper, that has become one of the most compelling rivalries in tennis, currently standing at 11 wins apiece. But when it comes to the World Tour Finals, Federer has had Murray’s number, with three wins out of three at the O2. The Briton’s only victory at the year-end event, indeed, came in Shanghai in 2008—one of the rare occasions when Federer carried an injury, to his back, into a tournament.

Murray was asked about Federer’s record in London: “I think the reason he’s so difficult to beat is that he’s so incredibly good on these courts. He’s a fantastic indoor player, has been his whole career. He’s one of the most talented shot-makers, so when there’s no wind or sun to throw him, and he’s on his game, he’s extremely tough. And he has a great record in this competition: he obviously likes it.”

Murray’s first challenge, however, was against one of the two youngest players and debutants who have fallen into his Group. The 24-year-old Kei Nishikori, rather like Federer, is an all-court shot-maker with nimble feet and great hands, and has been in surging form this season.

Murray and the Japanese star had met only three times, with Murray yet to drop a set, but their last match was almost two years ago. This year alone, Nishikori had won four titles to Murray’s three, and the same number of indoor matches, 13. He had also won a personal-best 52 matches, including nine against top-10 opponents—and reached both his first Masters final in Madrid and his first Grand Slam final at the US Open.

The two also sat shoulder to shoulder in the rankings, Nishikori at a career-high No 5 and Murray at No6, so the Briton was very alert to the danger posed by the Japanese man’s tennis: “It will be a tough match obviously. All will be tough matches, that goes without saying. He’s made big improvements this year and won a number of tournaments… He’s played some very good tennis and made improvements. And he’s obviously a young guy who will be getting better over the years.”

Just how tough soon became clear, for despite Nishikori struggling to get any rhythm on his serve, offering up a break point in the third game, and then conceding a break in the sixth, he persisted with his attacking tactics, while Murray’s own serving level dipped and the error count rose. The Briton double faulted twice to give the break back in the very next game and failed again to convert a break chance in the seventh. 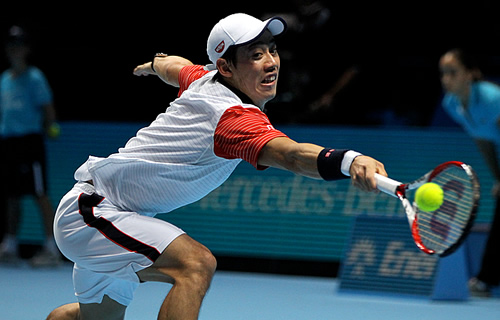 It was still far from plain sailing for Nishikori: He faced deuce before finally hold serve 5-4—despite two double faults. But he saw his chance against some unconvincing serving from Murray to break for the set, 6-4, after 47 minutes.

A glimmer of hope for Murray arrived in the shape of a physio to attend Nishikori, who took treatment on his right wrist and began the second set with it tightly taped.

Not that it seemed to impede him. He opened serve with a love hold and promptly broke Murray and held again. The set was 3-0 and the crowd began to shout Murray’s name to lift his efforts.

Murray finally got on the board after the longest game of the match. He held off three break points but could get no purchase on Nishikori’s serve. He had managed just nine winners to 22 errors, but he was about to find some form, and broke in the seventh game.

Now, though, it was Murray’s turn to take treatment, to his left calf. It worked, and he aced twice to level at 4-4. It was, however, a false dawn. Nishikori was looking increasingly confident, threw in some drop shots, and his backhand returns of serve made some crucial inroads.

One last backhand exchange, normally such a strength of Murray, saw him net a straightforward ball on that wing, and the set was done, 6-4—in just the same time as the first.

It was far from top-notch tennis from either man: Both made more errors than winners but Murray’s balance was never going to be good enough, 28 to just 18 winners.

He does, of course, have chances to redeem his position courtesy of the round-robin system, but with the experience and flair of Federer in one match and the fire-power and confidence of Milos Raonic in the other, it remains an uphill task.