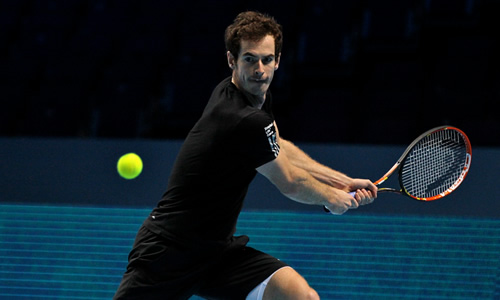 Andy Murray admits that he will have his work cut out when he takes on Roger Federer at the ATP World Tour Finals next week.

The British No1 was drawn in the same Round Robin group as the Swiss maestro along with Kei Nishikori and Milos Raonic.

He’s a great tennis player. But hopefully I’ll be able to do it this week

Federer has won six of the season-ending tournaments in his career and was most recently the runner-up in London in in 2012.

And Murray believes that the 33-year-old’s ability to make the most of the indoor environment helps Federer up his game at the tournament.

“I think the reason he’s so difficult to beat is that he’s so incredibly good on these courts,” said Murray. “He’s a fantastic indoor player and has been his whole career. Indoors there are no elements to deal with.

“He’s one of the most talented shot-makers, so when there’s no wind or sun to throw him, and he’s on his game and he’s extremely tough.

“And he has a great record in this competition, he obviously likes it. He’s a great tennis player. But hopefully I’ll be able to do it this week.”

Murray has had a hectic schedule in the last six weeks, but the Scot is feeling in good shape ahead of the season-ending showdown.

“It’s hard to judge until you’re out there on the match court,” he said. “But this week in practice, it’s been OK, practising hard and with the best players in the world, which is always tough.

“Winning matches is how you play yourself into form and that’s what I needed to do at this stage of the year so it was unusual that I played so many tournaments – but the way that you get confidence is by winning matches.”