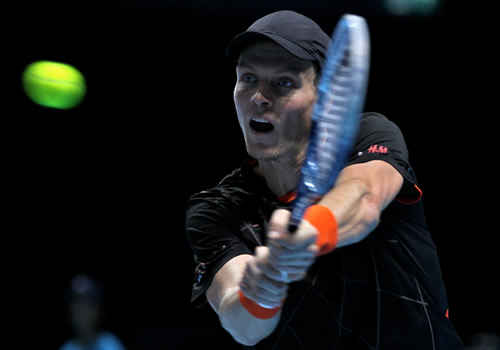 Tomas Berdych in action at The O2 Photo: Marianne Bevis

It was not the most auspicious start for US Open champion Marin Cilic, playing at the ATP World Tour Finals for the first time, nor for Australian Open semi-finalist and Rotterdam champion Tomas Berdych, who was in his fifth straight end-of-year finale but had only got beyond the round-robin stage once before.

Both faced 2014 Grand Slam champions—Cilic against world No1 Novak Djokovic and Berdych against Australian Open champion Stan Wawrinka—and both had managed to win just two games in straight-sets losses of under an hour apiece.

So it really was all on the line for both big men, each with 54 wins this year and split almost down the middle in their head-to-head. Berdych had the edge with five wins to Cilic’s four, but his problem was that the 26-year-old Croat had beaten him in their last two matches, at Wimbledon and the US Open.

In Berdych’s favour, though, was that it was Cilic who he beat to claim the Rotterdam title in February, in a handy 6-4, 6-2.

Cilic, disappointed in his career-first match at the O2, knew he had to find something different to keep his hopes alive: “Just have to stay positive, not to let those things get into you. There are two more matches. Luckily this is the first one where I played bad. Still there is an opportunity to go through: That’s a positive part of it.

“We played a few times this year… For both of us, is definitely the most important match now in the group. Whoever wins is going to have a chance to go through. I think both have to play better than today.”

Berdych pulled no punches in his self-assessment: “I’m in the worst possible situation that I can ever be. I’m going to face Marin or Novak first, in the end playing both of them, and the only chance to qualify is to beat them. It’s almost a mission impossible. But let’s try. Let’s do my work, my preparation. Whoever it is the next day, just need to be ready, try to play better.”

The O2 experience of Berdych perhaps counted for something in the opening games, that and the consistency he has brought to a tennis court through his steady climb to the top of the game. It’s been over four years since he arrived in the top 10 and he has yet to depart. And the 29-year-old Czech continues to break new ground. He reached a career-high No5 last year and this year for the first time reached the quarter-finals of three Grand Slams—and his first semi at the Australian Open.

Cilic, on his side, looked very edgy, opening this match with three unforced errors to face three immediate break points. He saved them, but faced a fourth, and this time, the attacking Berdych made no mistake to take the early break.

And the Berdych serve looked in very solid shape. By the time he led 4-2, he had dropped just two points on serve, while Cilic fended off more break points in the seventh game.

By the end of the set, though, the Croat seemed to be finding some range from the baseline, and held off some aggressive play from Berdych. He even looked as though he may break back after two winning net plays, but Berdych was just too strong, and broke again to take the set, 6-3.

Cilic won his opening game of the second set, but that would be all. He fluffed two chances to break in the third game with a couple of backhand errors, and was punished by some formidable offensive play from Berdych, who powered his forehand to within inches of the baseline time and again to twice break, 5-1.

The Czech then fought off a couple of late break points with his fifth ace of the match to take the win, 6-1, in an hour and a quarter.

Five of Berdych’s 10 career titles have come indoors but that seems destined to help him little in his final round-robin match against defending champion and world No1, Novak Djokovic, against whom he has a 2-16 record. And he lost to the Serb just last month, 6-0, 6-2, in the China Open final.

He may have been happier with today’s performance than his first—“I felt much better on the court, but still it was not one of my best”—but had no illusions about his chances in the next:
“I’m going to try to maybe three, four games: That would be better than the last time!

“It’s always a huge challenge to play No1 player in the world. The way he’s playing, where are we playing, it’s pretty much all set up for him and his game. It’s going to be great to play with him, maybe the last of the season, maybe not. But even if it’s the last one, it’s with the No1 in the world. I’m going to try to bring all I have what is left in me.”

They will play on Friday, but first Djokovic takes on Stan Wawrinka as both try to seal they place in the final four.