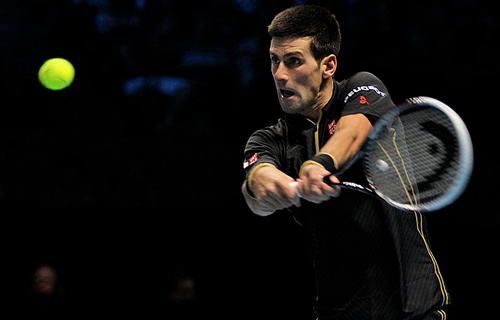 The newest Grand Slam champion on the block, 26-year-old Marin Cilic, was honoured to be playing in his first season finale, the prestigious ATP World Tour Finals.

“It’s a huge pleasure for me to be here in London: after a whole season, to be in the top eight, to play this amazing event. In the past I was close to making it, but I have never experienced it.”

The tall, articulate and quietly-spoken Croat first reached No9 in the rankings in 2010, and yoyo-ed in and out of the top 20 ever since. But this year, with a Grand Slam champion in his box—Goran Ivanisevic—a retooled serve and in better physical shape than ever before, he started to pile on results during 2014.

His 54 match-wins included a final run in Rotterdam, a fourth Zagreb title plus the Moscow and Delray Beach trophies, and of course his run to the US Open. He had a great indoor record, too: 16-1 matches and two titles under a roof.

But here’s the rub.

Just as Stan Wawrinka found, in the wake of his first Major in Australia, Cilic realised he had become one of the hunted: “I feel that the players respect my tennis more… the guys are swinging more, playing much riskier. It’s difficult to control on the court when they play all-or-nothing. It’s positive for me that the players think they need to play at their top level to beat me, but it’s also not easy for me to confront match after match.”

One of the men in his group is Wawrinka himself, who has beaten Cilic seven times in nine meetings and in both matches this year. Another is Tomas Berdych, who cited Wawrinka’s breakthrough as a spur to his own greater effort—though Cilic beat the Czech in their last two meetings, in straight sets at Wimbledon and the US Open.

Cilic’s biggest test and greatest yardstick, however, rose to meet him in his very first match in London, world No1 Novak Djokovic: Ten meetings, 10 losses. To add to the problem, the Serb was here fresh from winning the Paris Masters, as two-time defending champion, and on an unbroken 27-match indoor run.

As if Djokovic needed any more spur—aside from being a proud new father—he was within a couple of matches of clinching the year-end No1 ranking.

So Berdych’s assessment that Djokovic had as good as stitched up one place in this event’s semis seemed a reasonable one. The top man already had a tour-best 15-5 record against top-10 opponents, and was the only man to suffer no losses to anyone ranked outside the top 20. Formidable seemed an appropriate word.

For one game, it looked as though Cilic had remembered how close he came to beating Djokovic in the Wimbledon quarter-finals, where he led by two sets to one before losing in five. The Croat raced to an opening love hold of serve and twice had Djokovic at deuce in the next game. But it all fell apart from that moment on.

Cilic’s first serve went out the window and that opened the door for Djokovic to break—and the Serb was up and running. He streaked across the baseline time and again, retrieving from wide angles and twice firing extraordinary forehand cross-court winners on the stretch to break again—to love. In 27 minutes, he sealed the set, 6-1 with another break.

The second set began in the same rich vein of form and Djokovic broke straight away for 2-0. But Cilic roused himself in a flurry of forehand returns that beat even the fleet-footed retrieval of Djokovic, and he broke straight back to love.

It as just as well he did, for he would not win another game. He succumbed to the pressure of three break points in the next game, and watched Djokovic twice serve to love in a clinical and focused display. The set was done, 6-1, in 56 minutes.

So for twice in one day, both round-robin openers in the group were done in under an hour for the loss of just two games. And the statistical pattern was little different, too. Where Berdych had made just four winners for 20 errors, Cilic made only six winners for 22 errors.

Djokovic, though, truly looks a man on a mission. His 28th straight indoor win has set him up nicely for the tournament: He has a 16-2 record against Berdych and a 15-3 run against Wawrinka.

In truth, the Swiss always looked the most likely opponent to cause a problem—he beat Djokovic at the Australian Open and twice last year pressed the Serb to gripping five-setters at the US and Australian Opens.

That both have begun their London campaigns so strongly bodes very well for their face-off later this week.