Chance is not what has made Novak Djokovic the champion he has become, writes Marianne Bevis 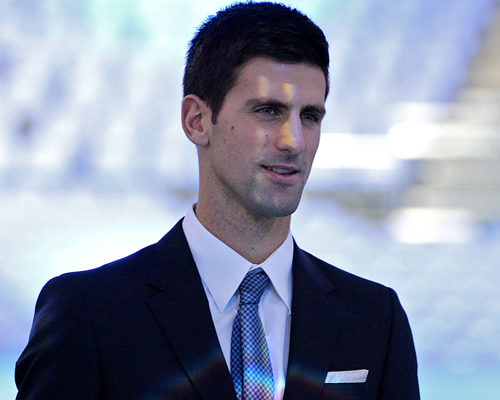 Perhaps it’s something about the number 27, though Novak Djokovic is certainly not a man to leave anything to chance.

The calm and collected Serb is within touching distance of ending the year as world No1 for the third time, and events would have to take an unexpected turn—losing most of his matches at the World Tour Finals over the next week and Roger Federer winning most of his—for the Djokovic to fall at the last hurdle.

But he has not left it to chance: Within a week of the birth of his first child, he was back in training for his defence of the Paris Masters title and, sure enough, he won his 20th Masters without dropping a set. That ensured an almost insurmountable gap for Federer to close come London.

Nor has Djokovic left to chance anything that may have given him an extra edge at every step of his career: His training regimes, his diet, even easing back on the ‘Djoker’ that made him one of the freshest personalities on the tour when he burst through the rankings from outside the top 100 into the top three in under two years.

No, chance is not what has made Djokovic the champion he has become. But as he prepares to defend his end-of-year title, 27 is very prominent.

At the age of 27, he is not just at his physical prime but has become the father to a son and husband to a wife.

As he prepares for his opening contest against Marin Cilic on Monday night, he is on a 27-match-winning streak indoors that dates back to his title-run past Federer at the World Tour Finals in 2012—and even takes in a couple of indoor clay matches.

And should he win his third straight Championship in a row come next Sunday, he will match the 27-year-old record of Ivan Lendl, the last man to ‘three-peat’ at the ATP’s most prestigious event in 1987 in New York.

No wonder Djokovic, then, has looked in a very serene place for much of 2014. As he said with a smile after his Paris victory: “I can’t be more grateful or happier at this stage of my life. I’ve become a dad, and got married in July, and won Wimbledon, and still No1. This is definitely some of the best time of my life and I’m trying to cherish every moment of it.”

By chance, though, Djokovic has drawn in his Group the two men who claimed their debut Grand Slams this year, Marin Cilic and Stan Wawrinka, along with world No7 Tomas Berdych.

The Serb has a very comfortable 10-0 lead over Cilic, though he was run close by the US Open champion at both Roland Garros and Wimbledon—where he went two sets to love down—and was also a set down to Cilic in Indian Wells in March.

Djokovic has a similarly impressive head-to-head over Wawrinka, but the back-story to their recent rivalry is a thriller. The Swiss beat Djokovic 9-7 in the fifth set in the quarters of the Australian Open and the two played two of the matches of 2013 in five-setters in Australia and then the US Open.

Berdych’s record against Djokovic is also firmly in the negative, 2-16. They have had some tough three-setters, but their last encounter, this autumn in Beijing, was little short of a rout to the Serb.

Djokovic, then, had good reason to feel confident at his pre-London news conference: “There are some matches I wish I had played a little better this year, including the US Open. But after the Wimbledon title and the break I had, it took some time to emotionally recharge and get back on the right track. I started doing that in China. Now I’m in a good place, and fighting for No1 in the world. I won this tournament two years in a row and have good reason to believe I can do well again this year.”

He also talked of the effort it takes to move from first-time Grand Slam champion to serial winner—and revealed again how little of his success since winning his first Major in Australia in 2008 has had to do with luck.

“The biggest adjustment is mental. In my case, I did have a lot of doubts in those years after my first Grand Slam, mostly because I lost the majority of my big matches against my two biggest rivals [Rafael] Nadal and Federer.

“I hit the bottom around 2010, but with the help of the closest people around me, I gathered the mental strength and found the motivation to work even harder and to be patient. I could only prepare myself as best I can on and off the court, and believed that one day I could do it again. The process is long and takes a lot of mental effort.”

But should he need any other motivation, he now has it in the shape of his own family: “Well my wife and I have had the blessing of becoming parents, and it’s the most beautiful experience: First tournament after that happened I won without dropping a set! Of course certain things change psychologically when you are playing for someone, and that someone is your son. It’s a new motivation.”

He is some way from having four such motivating reasons to maintain the dedication to being the best in the world—for of course Federer is also showing that two sets of twins is no impediment to reaching out for the No1 ranking again.

And Djokovic has nothing but admiration for that:“I am still far off from him with four kids, which is amazing to still play the high level he does: I understand what an effort it is with one—four I can’t imagine. Hopefully I can organise my life as well as he did!”

But he concluded: “I think [this title] is the crown of achievements of all the players here, and they all want to finish off this season in the best possible way.”

One suspects Djokovic may do just that, not just with a double defence but as 2014’s year-end No1.