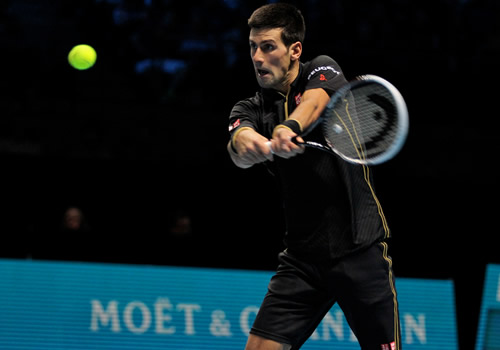 If rivals of Novak Djokovic thought that becoming a father for the first time less than a month ago would cause him to miss a step in his progress to the season’s end, they were quickly disabused.

The man who had won three Masters and the Wimbledon title, and reached the French Open final, in the first half of 2014, reached the semis at the US Open and Shanghai, picking up the Beijing title in between, and after just a few days’ ‘paternity leave’, headed straight to Paris to defend the final Masters of the year.

He did not drop a set in doing so, despite all five opponents being ranked in the top 25, and as if to reinforce the point, he had dropped just five games against fellow members of the elite eight thus far in London.

Djokovic assured the media that “not much has changed” since becoming a father, before adding: “I do feel mentally even stronger since we became parents.”

This from the man who is two-time defending champion, on a 29-match indoor streak dating back two years, and world No1. And he was also within a whisker of achieving another special landmark. By winning his final round-robin match in London, he would confirm the year-end No1 for a third time.

That he was facing a man, in Tomas Berdych, who he had beaten 16 times in 18 matches, and demolished in their last meeting in the Beijing final, 6-0, 6-1, made Djokovic’s campaign a confident one.

Berdych pulled no punches in his self-assessment after his own loss to Stan Wawrinka: “I’m in the worst possible situation that I can ever be. I’m going to face Marin [Cilic] or Novak first, in the end playing both of them, and the only chance to qualify is to beat them. It’s almost a mission impossible. But let’s try.”

And he had no illusions about his chances against the world No1 after his near-double-bagel in Beijing: “I’m going to try to maybe three, four games: That would be better than the last time! It’s going to be great to play with him, maybe the last of the season, maybe not. But even if it’s the last one, it’s with the No1 in the world. I’m going to try to bring all I have what is left in me.”

There was only one scenario in 10 outcomes for Group A that would not immediately confirm Djokovic in the semi-finals, and that required Berdych to win in straight sets—and also Stan Wawrinka to beat Cilic in straight sets—and even then, Djokovic looked assured of advancing on count-back percentage.

In the event, though it had been spoken in jest just two days before, Berdych did achieve his wish of winning four games, though for a while, it looked as though he was heading to the same kind of scoreline that he suffered in Beijing. He was down 4-0 before he got on the scoreboard, and even that game he opened with a double fault.

The big Czech held again but was a 6-2 set down in just 31 minutes. The story was in the stats, too, which showed the kind of pressure Berdych was under on serve, and that dragged his first deliver percentage down to only 36 percent.

As if to press home the point, the scoreline unfolded in precisely the same way in the second set, though Berdych managed more resistance in the first game to work two deuces before being broken.

In the fifth, he faced break point before holding, but Djokovic dropped only one more point on serve to seal the match, 6-2, after 68 minutes of precise, near flawless tennis. Djokovic made 18 winners to 10 errors, and faced not a single break point. No wonder he lifted his arms to the sky before striding to his box to embrace his team.

But of course his joy had another reason: Victory ensured he will end the year as world No1 as well as taking one step closer to retaining the title here for a third straight year—and not many men have done that, even six-time champion Roger Federer.

Berdych could only concede that Djokovic was again the better player: “Well, definitely he deserves to win. There was no question about it. He just secured his spot for the No1 player in the world. I think it just shows how great he is, how well he played during the whole season. I mean, there was not much doubt that the match could go the other way. There was not a way I can challenge him better than this.”

The result means that the blockbuster final between old adversaries and the top two ranked players in the world, Djokovic and Federer, is still on the cards. The Serb knows he will play Kei Nishikori to reach the Sunday face-off but Federer will not know his opponent until the final match of Group A is completed.

For now, though, the spotlight is on Djokovic, and four former No1s, John McEnroe, Mats Wilander, Carlos Moya and his coach Boris Becker, joined him on court for the formal trophy presentation.

And rightly, the last word goes to the Serb, too.

“It’s been a long year and it’s one of the ultimate challenges and I’m just glad to be standing here with the trophy knowing how many legends of the sport have done the same before. It’s an extreme honour to have them with me here.”