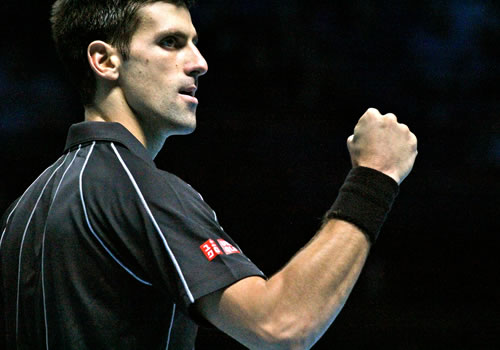 The headline story of this year’s ATP World Tour Finals is the one that features the top two stars of the tour this year, Group A leader Novak Djokovic and Group B leader Roger Federer.

Since these two contested the Wimbledon title, and with Rafael Nadal missing for much of the rest of the season, they have by turn built a near-impenetrable wall at the top of the rankings, to such an extent that either could end the year as No1.

They have featured in all but one Masters final this year, winning six of them—though both became fathers along the way.

They lead the pack for titles won—Djokovic with six, Federer with five—and share the top three places for matches won along with Andy Murray: Federer has 68, Murray 58, and Djokovic 57.

They are the only two in the field to have won the most prestigious non-Grand-Slam title in the calendar, Federer six times, Djokovic three. And they have qualified more often than any of their competitors, too: 2014 will be Federer’s 13th straight time, Djokovic the eighth.

Add to the mix that they both bring exceptional indoor records to the ultimate indoor event—Federer has the career-best indoor record comprising 20 titles, Djokovic is unbeaten in his last 27 indoor matches—and they arrive in London as favourites to reach a blockbuster final.

Yet aside from the familiarity of the two leading men, there is this year an interesting blend of experienced old hands and ambitious first-timers.

Nadal is absent with illness, Juan Martin del Potro with injury, and David Ferrer missed out on a fifth consecutive year by one place—but will come to London as the first alternate nevertheless.

Ferrer will be joined by one of the oldest men ever to debut at the event—albeit as second alternate—Feliciano Lopez. At the age of 33, he reached a career-high ranking this year and takes advantage of the withdrawal of Grigor Dimitrov and Jo-Wilfried Tsonga, to enjoy just a little of this tournament’s unique atmosphere.

Some other familiar faces do join the fray. Tomas Berdych qualified less than a week ago for his fifth consecutive visit, and Murray, who missed last year after back surgery, returns for the sixth time—though he too left it late to seal his place. But what a surge he found during the autumn, playing six weeks and tournaments back-to-back and winning in Shenzhen, Vienna and Valencia.

Murray, then, is riding a wave of form, and joins the only other man with more matches in his legs this year, Federer, in Group B.

But the other two in their Group are among three players making their debut at the event, and each has his own additional claim to fame. Milos Raonic is both the first Canadian and the first player born in the 1990s to qualify, while Kei Nishikori, just a year older than Raonic, is the first Asian singles player to qualify.

The other new face, joining Djokovic in Group A, is Marin Cilic, who started the year with a bang to compile the second-best indoor run of the last 12 months and went on to claim his first Grand Slam, beating Federer and then Nishikori, to triumph at the US Open. At 26, he is the third youngest among the elite eight.

The Bryan brothers, Bob and Mike, may have won their 102nd title last week in Paris, and may have sealed the year-end No1 ranking for a record 10th time, but not since 2009 have they lifted the WTF trophy.

Last year, they were runners-up, and as head of Group A, they face formidable competition in their campaign for a fourth title. Their pool contains last year’s semi-finalists Alexander Peya and Bruno Soares, winners of eight titles this year, Jean-Julien Rojer and Horia Tecau, plus Australian Open champions, Lukasz Kubot and Robert Lindstedt.

Top of Group B are two-time champions Daniel Nester and Nenad Zimonjic who, with a combined age of 80, have decided this year’s Championships will be their swan-song.

To end their doubles career with a bang, they will have to outplay Roland Garros champions Julien Benneteau and Edouard Roger-Vasselin, the 2012 champions Marcel Granollers and Marc Lopez, and last year’s semi-finalists Ivan Dodig and Marcelo Melo.

It is the first time Nestor and Zimonjic have returned to the O2 since winning in 2010, and theirs would be a popular win with a crowd that loves its doubles tennis should their final reunion end in victory.