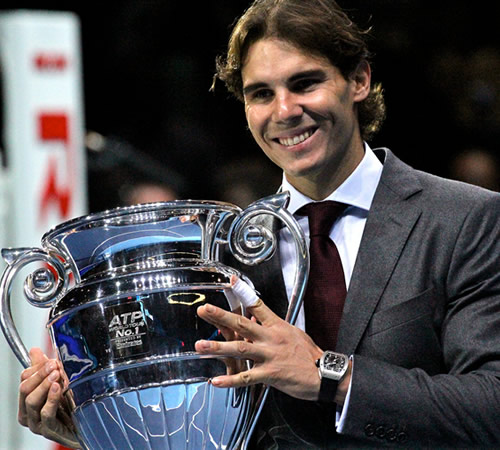 Rafael Nadal with the ATP trophy for finishing 2013 as world No1 Photo: Marianne Bevis

Just a week after Novak Djokovic claimed back the No1 ranking from Rafael Nadal by winning the Wimbledon title, so becoming the first player to guarantee his place among the elite eight at the ATP World Tour Finals in November, the Spaniard has also sealed his place in London.

It must be all the more pleasing for the world No2, because he has not had to lift a finger, let alone his formidable racket, to do so. Rather, he has been taking a well-earned mid-season holiday on the beautiful Balearic Islands of home. As is his usual way, Nadal is recharging his batteries not in some far-flung haven but—as evidenced by the contented posts on his Facebook page over the last week or so—by enjoying the simple pleasures of fishing, sunshine and dinner with friends and family.

Such has been Nadal’s achievements already this season that he was within touching distance of confirming his London place even before Wimbledon. He started the year with a bang with the Doha title, which was swiftly followed by a final run at the Australian Open, the 500-point title in Rio, and the final in Miami.

Come his beloved clay season, he suffered unexpected quarter-final losses at Monte Carlo and Barcelona, two of his most successful tournaments, but went on to take the Madrid title and to reach the Rome final, losing to Djokovic.

Nadal ended the clay swing on his accustomed high by winning the French Open title for a record ninth time, avenging his Rome defeat to Djokovic to ensure he retained the No1 ranking.

Switching to the grass of Halle within a couple of days of his Roland Garros victory understandably proved a step too far, and Nadal lost his opening match. Come Wimbledon, where he had won just one match in the previous two years, he survived three consecutive first-set deficits to reach the fourth round but could not do so again against the blistering tennis of teenage sensation Nick Kyrgios.

So despite having more match-wins this season than any other player—44 of them—his place in London would have to wait out the results of other players during the Wimbledon aftermath. In reality, though, with 6,645 points in the race—more than 2,000 ahead of third-placed Roger Federer—it was as good as a done deal.

The World Tour Finals, which sees the top eight ranked men compete in a round-robin format to earn the four knock-out places, is the most prestigious event in the ATP tour calendar and second only to the Grand Slams in points available.

It is also the only big title still missing from Nadal’s resume. The Spaniard has won all four Grand Slams, Olympic gold and the Davis Cup, but the year-end championship has so far eluded him.

This is the 10th time Nadal has qualified for the tournament, though he was unable to take up his place in 2005, 2008 and 2012 due to injury problems. Four times in his six visits he has made it to the knock-out stage and has twice reached the final, losing to Federer in 2010 and to Djokovic last year.

Lucky 13 for the Bryans

Twins Bob Bryan and Mike Bryan have become the first doubles team to confirm their place at this year’s World Tour Finals, for what will be the 13th time in a row. The Americans have won the title three times, in 2003, 2004 and 2009.

The Bryans have captured five doubles titles in eight finals so far this year though unusually for these prolific winners, they have so far failed to win a Major in 2014. Last year, they ended the season ranked No1 for a record ninth time and for the fifth consecutive season.