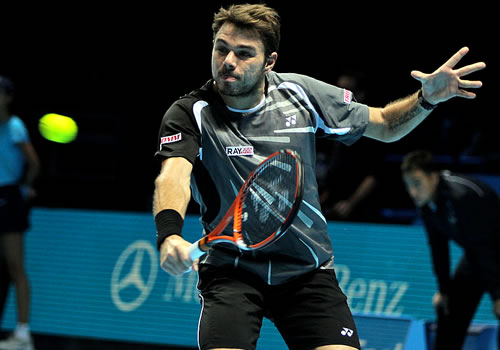 Tomas Berdych has been one of the most consistent presences in the top 10 outside the ‘big four’ of Novak Djokovic, Roger Federer, Rafael Nadal and Andy Murray. It’s been over four years since he arrived, and he has yet to depart.

Indeed, Berdych has ended every year during his tenure in the top 10 no lower than No7, where he is also ranked this week.

And the big 29-year-old Czech continues, slowly and steadily, to break new ground. He reached a career-high No5 last year and this year for the first time reached the quarter-finals of three Grand Slams—and his first semi at the Australian Open.

But that tough, tight four-setter match in Melbourne was the last time he had played Stan Wawrinka, in their 14th meeting. Their previous match? Here in the round-robin stage of the World Tour Finals, another close three-set contest, and another win to Wawrinka.

And Berdych pointed out ahead of this year’s end-of-season finale the ill luck of his group, which arrayed against him all three of the reigning Grand Slam champions in the draw. Wawrinka went on to win his first Major in Australia, Djokovic won Wimbledon and Marin Cilic won his maiden Major at the US Open.

And as Berdych put it, “Having Novak in the group pretty much means one spot is already taken and we’re going to fight for the other spot.”

There is no doubt it was an uphill task against the Swiss. World No4 Wawrinka also won his first Masters in Monte-Carlo, and as he had done in Melbourne, defeated three top-10 players to do so.

In fairness, the second half of Wawrinka’s season had not been as successful as he struggled with the kudos and expectation that followed Grand Slam success: Many fellow players went on to say that his victory, at 29, and so rare from one not among “the four”, had spurred on their own hopes.

So Wawrinka arrived in London with something to prove, having won just two matches to four losses since his quarter-final finish at the US Open.

And did he prove it.

Wawrinka stormed into a quick 3-0 lead after breaking Berdych in the second game and dropping only one point on his own serve. He then rubbed salt into the wound be breaking to love and serving out to 15 for a 5-1 lead.

The Swiss had 21 points to the Czech’s five, but Berdych rallied, encouraged on by the Swiss-supporting crowd, to fight through another break point and get on the scoreboard. But with the clock at 25 minutes, Wawrinka served out with ease, 6-1. He had dropped just three points on serve, only one on his first serve.
Berdych lost all but two points of his 11 second serves, testament to the aggressive, attacking and supremely confident tennis of his opponent.

Berdych had the benefit of serving first in the second set, and to his great credit, managed to switch on his serving for a love hold. The problem was, Wawrinka was still dialled in, also serving to love, and his famed single-handed backhand—a think of beauty and great power—punished Berdych though four deuces, drawing more and more errors, and breaking at the third attempt.

And so it went on. Wawrinka offered hardly a point on serve: a love hold took him to 3-1, he broke again, and made three aces to hold for 5-1. Berdych looked out of ideas and answers, and it was downcast figure who walked from court after one last break conceded the match, 6-1.

The disparity in the winning power of Wawrinka and flailing power of Berdych showed in the winner count: 16 to just four. As for unforced errors, Berdych built a stack of 20.

He put it baldly afterwards: “Unfortunately it was my worst match of the whole season, and I kept it for the start here in the World Tour Finals. But there are days like that. Now it’s over, it’s just matter of looking forward… try to leave this somewhere very far and try to come up with some better tennis.”

Berdych, for all his consistency, has only made the semis once in four visits to this tournament, and does indeed face an uphill task to get that far again. As for Wawrinka, this began to look like the man who started 2014 with such a bang—and an exhilarating sight it was too.