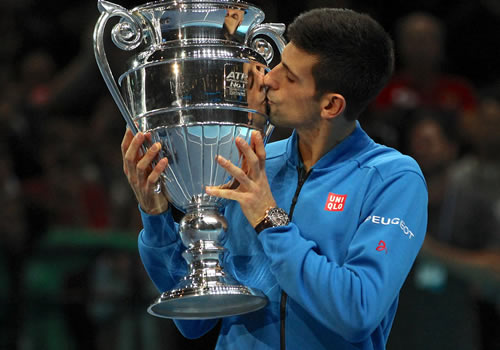 Novak Djokovic kisses the trophy handed to him for finishing the year as world No1 Photo: Marianne Bevis

What better way could there be to start the ‘Final Showdown’, the tournament where the best eight tennis players in the world contest the unofficial ‘fifth Grand Slam’, than with the tournament’s two prolific champions: six-time champion Roger Federer and four-time and defending champion Novak Djokovic.

As the luck of the draw would have it, these two, who between them have also ended the year as world No1 more often than anyone else, fell into the same pool—a shocker of a prospect for the other pair in the Stan Smith Group, Kei Nishikori and Tomas Berdych.

But as every player here has been at pains to stress, in this tournament, with these eight players, there are no givens: Each has the utmost respect for all the others.

For every one of the eight men here has won multiple titles this year—again headed by Djokovic and Federer with 10 and six respectively—and won well over 50 matches.

For Nishikori, who opened the tournament against Djokovic, the challenge was particularly acute. Since the Japanese star, who slipped to No8 late this season after a bout of injury problems, caused an upset at the US Open last year by beating Djokovic in the semis, he has lost three times, including here last year. Twice, Nishikori had taken him to a deciding set, but this year especially, Djokovic was proving near impregnable against all-comers.

He has not fallen short of a final since winning the Australian Open, one of three Major titles. That’s 14 straight finals, six Masters titles and 18 consecutive months at No1. Nishikori was only too aware of the problem.

“Everybody having to play Novak in the first match is tough for sure. He’s not going to give you any free points… I think what he’s done is amazing—his consistency. He plays almost every tournament well. I have to play good tennis but he stays focused all the time. His concentration is amazing. He’s the toughest player to beat right now.”

Even Nishikori, though, probably did not anticipate quite such a one-sided affair, though his retirement with an abdominal strain in his second match at the Paris Masters little more than a week ago did not bode well. He arrived here fit and ready to play, but perhaps his problem was too little match-play: He also lost in the second round of his previous tournament, the Shanghai Masters.

But Djokovic was all over him from the off. The world No1 opened with a love game, broke at the third attempt in the second game, and held for a 3-0 lead. After a deuce hold, Nishikori finally took a game, but it would be his only one of the set: after 31 minutes, Djokovic had the firm advantage… and within minutes, was up in the second, 2-0.

Nishikori scored his second game in the third of the set, but once more, the Japanese player would not manage another game. Djokovic broke twice more to take the match with a volley winner, 6-1, in 65 minutes.

He had won twice as many points, made more winners and fewer errors, and offered up not a break point to Nishikori.

Djokovic has won in London unbeaten for the last three years, so his victory today makes it a 15th consecutive win on this magnificent centre court. One more win and he will have notched up 80 for the year. Appropriate, then, that he was immediately awarded the vast silver trophy that goes to the year-end No1—which he has now taken in four of the last five years.

The match had begun with a minute’s silence as a mark of respect for the tragedy that unfolded in Paris during the course of the weekend. It concluded, as Djokovic accepted the trophy, with his own words of support for Paris where, exactly a week ago, he was also lifting a trophy, the Paris Masters.

Within half an hour, he was in press and responding at length and with compassion about the migration crisis in which Serbia has found itself a central player.

Djokovic, an intelligent, well-read, multi-lingual man, seems to go from strength to strength not just in his tennis, but as an ambassador for his sport and his country—and he takes his position at the top of the game very seriously: “Of course, we all have bad days, up and down. I didn’t have many this year on the tennis court, that’s for sure.

“I accept every single day of my life as a new day, where I have an opportunity to do something good for myself and others in this sport. It motivates me. I have so much motivation and a lot of sources of inspiration to keep working and practising. I love the sport. I love going on the practice court. It doesn’t bother me. It doesn’t put weight on my shoulders.”

But to London and to now: the mighty Serb has thrown down the gauntlet to seven of the best that tennis has to offer him. The first given the chance to respond, Federer, is another man of many talents and many languages, another ambassador for his sport. He is also the only man to have beaten Djokovic twice this year. Would he pick up the gauntlet when he took on No6, Berdych?