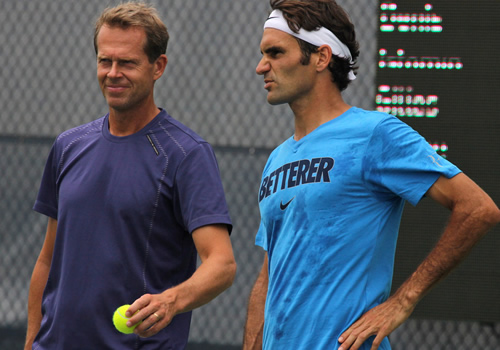 The marquee names of tennis’s season finale, which gets under way at the iconic O2 this weekend, are writ large in posters metres high: the elite eight of Novak Djokovic and Roger Federer, Stan Wawrinka and Andy Murray, Kei Nishikori and Tomas Berdych, Marin Cilic and Milos Raonic.

But this year will add an extra dash to the already-electric proceedings. One look at the players’ boxes shows that another set of stars is also out in force, in a unique coming-together of former ATP World Tour Finals participants.

Federer and his flowing serve-and-volley tennis has flourished during 2014 with the support of mentor Stefan Edberg, who reached the season’s finale nine times and won it in 1989.

Djokovic has shown remarkable consistency and confidence under the guiding hand of Boris Becker, himself an 11-time qualifier, an eight-time finalist and a three-time winner at the event.

Raonic has reached new milestones—the quarters at Roland Garros and semis at Wimbledon—with the help of Ivan Ljubicic, twice a qualifier for the World Tour Finals.

Cilic has broken the Grand Slam glass ceiling under the tutelage of Goran Ivanisevic, five times a member of the year-end elite.

Nishikori has set fresh landmarks time and again during 2014 with the support of Michael Chang, seven times a qualifier and a finalist at the tournament in 1995.

Stan Wawrinka joins the London finale for the second time since joining forces with Magnus Norman, a qualifier in 2000.

The odd one out among the eight is Berdych, who has been with former player Tomas Krupa since 2009. It was quickly clear that, despite barely breaking out of the top 200 in singles himself, the Czech former pro has brought out many good things in Berdych.

In 2010, his charge reached his first Grand Slam semi at Roland Garros and then his first final at Wimbledon—and he continued to break new ground: the semis at the World Tour finals in 2011, semis at the US Open in 2012, a career-high No5 last year, and the semis at the Australian Open and two more Major quarters this year. But he admitted in an interview by Donald McRae for The Guardian earlier this year: “Many times I get asked if I am looking for any names [to coach me] and, yeah, there is still a window for that. I’m open to it.”

When Murray parted from former world No1, eight-time Grand Slam champion and five-time World Tour Finals champion Ivan Lendl earlier this year, the time seemed ripe for a Czech tie-up. But Lendl told the press at the US Open that “the time now is not right.”

Looking at the possible interactions that London offers up between such an array of former players, Lendl’s involvement could have added a certain je ne sais quoi to the proceedings. He did, after all, beat Ivanisevic five times in their six meetings, Chang five times in seven meetings, and had an intense rivalry with Edberg, losing 13-14 in their head-to-head.

But even without Lendl, there is one courtside rivalry that will bring another dimension to the competition in London. For the coaches of the two men who top the Groups and are vying for year-end No1, Federer and Djokovic, had a rivalry that spanned more than a decade and 35 matches… only one fewer than the matches played between their charges.

Becker would go on to lead Edberg in their rivalry, 25-10. Will he see ‘his man’ eventually overtake Federer too? Not this year, that much is certain. But Djokovic, should he win the London title, will close the gap to just one.

You can almost hear the competitive juices flowing already.