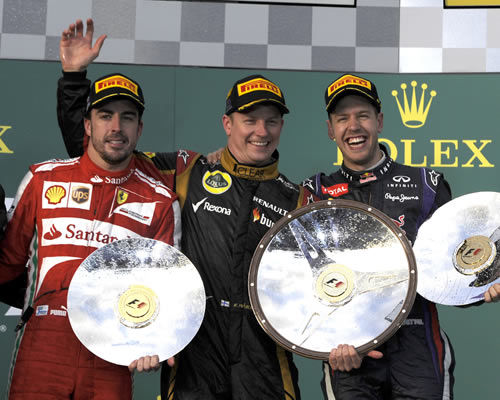 Australian Grand Prix winner Kimi Raikkonen declared he had no worries for his car’s tyres after proving the victor in a tense tactical battle at Albert Park.

With rivals Ferrari and Red Bull pulling into the pits for a third set of tyres, the flying Finn’s gamble granted the Enstone-based team the first victory of the season.

“That two-stopping strategy was our plan before the race,” said Raikkonen. “I was confident that the tyres would be OK.

“I had a very good car all weekend with no issues with the tyres so I thought it would be easy to do it.”

The 33-year-old was a surprise victor, beginning the race from the fourth row on the grid – well behind the pole-position Red Bulls, who dominated qualifying.

But with Mark Webber’s dismal start and Sebastian Vettel constantly hounded by the Ferraris and the conditions, the qualifying leaders dropped back into the racing pack.

The stage was set for Raikkonen to defy his lowly track position, turning in a drive which belied his seventh-placed grid position and announced Lotus as major contenders – yet he admits the weather helped.

“I was just trying to make sure we had a gap if the rain came,” said Raikkonen.

“I didn’t do any long runs over the winter but I knew I had a good car and I had a feeling it would be a good race.

“Near the end, I was still pushing because I knew Fernando was catching up a bit and I thought at some point we would need a little extra if the rain came again.”

Flawless drive aside, the ease of Raikkonen’s victory will be giving his closest competitors food for thought.

“It is a worry, yes,” admitted Alonso. “Lotus did a very good job.

“We need to analyse what we can do for the next race – they will be a tough opponent.”

The Finn will now take to Malaysia’s Sepang circuit next weekend with a seven-point advantage over Alonso and ten ahead of last year’s champion Vettel.

Yet with his team-mate Roman Grosjean turning in a forgettable tenth-place drive, Lotus sit four points behind Ferrari in the constructors’ championship.