Australian Open 2013: Andy Murray and Roger Federer both ease through their first-round matches at Melbourne Park 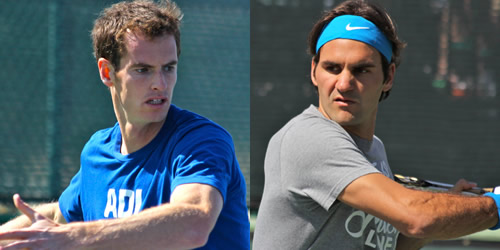 Andy Murray and Roger Federer both eased through their openers Photo: Marianne Bevis

The rankings gap between the two men who opened the action for the bottom half of the men’s draw in Australia was neat but large—a full 50 places between Andy’s Murray’s rarefied No3 to Robin Haase’s 53.

On that alone, this looked a straightforward match for the Briton, but add into Murray’s side of the scales an Olympic gold medal and first Grand Slam title last year, two previous finals in Melbourne—with almost a third last year—and that Haase had won just a single match since last August, and it had the makings of a very one-sided contest.

But imprinted on the Murray memory was one particular match, fewer than 18 months ago, at the US Open. The Dutchman, having won their only other encounter in Rotterdam in 2008, came startlingly close to beating him again, taking the first two sets before a non-plussed Murray fought back to take the next three.

It had clearly been a lesson learned, and Murray opened on the Rod Laver court like a whirlwind, allowing Haase to hold his opening service game to love but breaking the next two to lead 4-1. The Dutchman, despite pounding his big forehand deep and wide to earn five break points, could not penetrate the Murray defence, nor fend off his first serve. Murray held, but Haase had drawn some confidence and broke in the eighth when Murray dropped a volley short.

The problem for the Dutchman, though, was that he could afford nothing less than his best to stay in contention. He had produced it thus far, but another break handed the set to Murray, 6-3, and by the time the clock hit one hour, the Briton had also broken twice for a 5-1 lead in the second.

Murray served out the set, 6-1, and promptly broke in the opening game of the third. And although Haase managed to break back, it only delayed what was increasingly inevitable. For Murray never looked in anything other than complete control: calm, focused and ruthless in his tactics and execution.

The Scot broke again to take set and match in little over an hour and a half and, it should be added, looked fitter, faster and stronger than ever—a prospect that should send shivers down his opponents’ spines.

His next one is the 100-ranked Joao Sousa and one can only wish the Portugese man luck. The same may be said of Murray’s scheduled Round 3 opponent, No25 seed, Florian Mayer, who survived, just, from two sets down.

The only seed in Murray’s segment to fall was Alexandr Dolgopolov, in a crowd-pleasing contest against the equally flamboyant tennis of the returning Gael Monfils. The Frenchman or his compatriot Gilles Simon are possible fourth-round opponents.

The match-up between No2 Roger Federer and Benoit Paire, not unlike Murray’s against Haase, boasted a gap of 44 places in the rankings, but in the young Frenchman, Federer faced one of the rising players on the tour—a creative, unpredictable stylist packaged in a tall, extrovert frame.

Paire came to Australia boosted by a semi finish in Chennai—where he beat Marin Cilic—and a growing list of decent scalps: Andreas Seppi, Dolgopolov and Grigor Dimitrov among them.

But if Murray had gold weighed in his scales, Federer had diamonds: 17 Grand Slams, four of them in Australia; at least the semis here for the last nine years, the longest-standing No1 in tennis history, and an eye on reclaiming both the title and the top spot on Melbourne.

Federer, despite no competitive matches this year, hit the ground running to break the Frenchman in the first game, but it was soon clear just what flair Paire possesses. A backhand return of serve, a delightful drop shot and a running forehand past Federer at the net earned two break points. A couple of kick serves and a winning smash from the Swiss, though, snuffed out the chance.

After 12 minutes, Federer was 3-1 up and attacking the net not just on his own serve but on Paire’s, too. The Frenchman was not averse to the net either, and the pace and angle of his ground strokes drew enough errors from Federer to stay in touch. A particularly good drop shot from Paire even took him ahead on winners, 7-6.

By the end of the seventh game, that order had switched in Federer’s favour as a glorious backhand cross-court winner broke Paire again, and Federer served out the set, 6-2.

The contrast with the Murray/Haase match was extreme. The first had been full of long, probing rallies and powerful baseline exchanges with a few drops and volleys thrown in. This was a succession of short, varied rallies, acute angles and plenty of net play with occasional baseline tests.

At the start of the second set, Paire reached deuce on the Swiss opening serve but that was as close as he came to breaking. Again it was Federer who struck first, breaking in third game with a backhand winner past a Paire rushing the net, and the Swiss quickly consolidated with a love service game, 3-1.

This now began to take on the look of a practice session: Federer chipped-and-charged, attempted down-the-line winners, picked off flamboyant overheads and made a few errors, though not enough to offer a single break point. One hour in, and Federer had the second set, 6-4.

Paire was finding the task increasingly dispiriting: None of his tactics was making inroads. He managed to fire off the occasional inspired winner—and indeed his stats looked very respectable alongside Federer’s: 21 winners to 25 and just nine more unforced errors. But Federer broke in the first and third games to lead 4-1, survived a break point in the sixth, and broke again to finish the match, 6-1, in a scant hour and 23 minutes.

As for clues to the evolution of the Federer game, even in so short a match he won 25 points from 31 net approaches. His serving accuracy did not generate big aces but a high percentages of winners—including 60 percent on the second serve. How such tactics will fare against the power of those deeper into the draw—especially on these relatively slow courts—remains to be seen.

His next opponent is fellow 31-year-old, Nikolay Davydenko, a recent finalist in Doha, who dropped his opening set against Dudi Sela but came through in four.

Beyond the Russian, Federer sees the in-form Bernard Tomic, arriving here with his first ATP title in Sydney and an easy winner in his opener. Then comes another young gun, Milos Raonic—or perhaps Philipp Kohlschreiber. And scheduled for the quarters is Jo-Wilfried Tsonga, a comfortable straight-sets winner who has seen two of the three seeds in his segment beaten: Tommy Haas and Thomaz Bellucci.

It’s a tough draw, but Federer proved one thing with his first win of 2013: He’s fit and ready for the fight. And that’s not bad for the only man who has played in every Grand Slam this century.