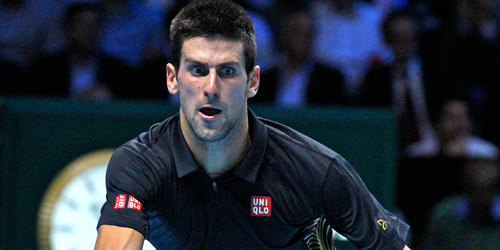 The last decade has nurtured some of the most compelling rivalries in men’s tennis.

Gradually, a new pair of names joined the party, helping to build a firewall between the top four and the rest: Novak Djokovic was the first to break the Grand Slam stranglehold of Federer and Nadal, and would finally usurp the No1 ranking they shared for so long.

So constant was the Serb that he has faced both rivals even more often: Federer 29 times, Nadal 33 times. And with Djokovic and Nadal winning nine straight Slams between 2010 and 2012, their rivalry became the new talking point.

But the latest Grand Slam champion has brought an equally gripping rivalry to the fore. Andy Murray has been the constant “other”, playing Nadal 18 times and taking his rivalry with Federer to 20 with his win over the Swiss in the semi-final. But the buzz over the last 12 months has been the power struggle between Murray and Djokovic.

Born a week apart, they are long-standing colleagues—friends, even—but until last year, Djokovic led the way. He had won more matches, had won five Grand Slams, was the best in the world. Then at last year’s Australian Open, that balance of power showed signs of shifting. In the first of no fewer than seven 2012 encounters, Murray came within a hair’s breadth of beating Djokovic in the semis, beat him at the Olympics and outlasted him to win his first Major at the US Open.

Now, as the last two men standing, they would resume their face-off where it started in 2012—in Melbourne—but this time in the final.

Their paths thus far were rather different: Djokovic overcame early challenges before enjoying a straight-sets demolition of the No4 David Ferrer in the first semi—and had an extra day’s rest; Murray’s draw fell wide open, and he eased to the semis, but there found a Federer at his most determined. It took Murray five sets and more than four hours to reach the final. In the end, that proved to be a highly significant factor.

Murray and Djokovic certainly mirrored each other physically, dressed in black with just hints of waspish yellow etched in the trim.

They mirrored each other in their muscularity of purpose, too, including the two opening points: a forehand winner down the line from Murray followed by an ace from Djokovic.

The games quickly settled into the physical, tactical and audible rhythm that marks their matches. Forehands alternated with backhands, cross-courts with down-the-lines, attack from the baseline with defence from two metres behind it, now hitting through the court, now slicing away from it—and all to identical grunts on every strike.

Murray did not lose point on serve until the sixth game but his low first-serve percentage gave the Serb several openings off the ground, and in the sixth game Djokovic had a first break point, but Murray was rock-solid. Djokovic worked his angled drives to the baseline corners to earn two more chances, but Murray countered. This chess-like probing extended through ever-longer rallies but eventually two big Murray serves took him through.

The points stood at 34 apiece as they headed into a tiebreak on the dot of one hour.

Djokovic opened with a double fault, and that set the direction for the game, as Murray hit a purple patch through long rallies of pinpoint accuracy. The only noise now came from ball on strings and the staccato squeaking of shoes as Murray edged to a 6-1 lead. His focus was pinpoint sharp, too, and a 25th error from Djokovic gave him the set.

Murray maintained his dominance in the opening stages of the second set too, extending his run of points to 17 from a run of 19. He went 40-0 on the Djokovic serve and seemed set to extend his lead, but the Serb changed tactics, followed his serve to the net, and pulled his way back. A final 26-shot rally ensured the hold after almost 10 minutes.

Murray would undoubtedly look back at that phase of the match and rue his lost chances, though for the moment, he still looked in command. But he had no more break chances: It would be another tie-break.

Again, it was as though a mirror was held up to the match. Where Murray had been the aggressor and winner of the first tie-break, Djokovic took control of the second, and won the set, 7-3, in an almost identical time, 63 minutes.

That proved to be the turning point. While Djokovic pumped his fist, Murray revealed to the world the state of his feet—and they did not look good. With blisters treated, he returned to the fray to try and regain his concentration.

He managed to do so until the eighth game, helped by a slight dip in Djokovic’s level, but as they stood finely balanced at 100 points each, Djokovic lifted his hitting to near perfection to steal a punishing 36-stroke rally. He made the first break of the match and served out the set, 6-3.

Djokovic is a dangerous front-runner, and he could sense, like everyone watching, that Murray was beginning to struggle physically—not just with his feet but from a pulled hamstring during a brilliant lunging volley winner.

Djokovic fed off Murray’s growing number of second serves—caused perhaps by the pain in his left thigh—to build up sequences of clean, aggressive hitting. And although Murray survived deuce on his opening service game, Djokovic broke in the third and the fifth games for a 4-1 lead, and served out the match, 6-2.

In the end, the remarkable physical specimen that is Djokovic out-lasted his opponent, upping his levels as the Murray resistance diminished. The Serb piled on 47 winners to Murray’s 29 and outperformed on serve and at the net. Only a 100 percent Murray could stay such a course, and he was not.

Melbourne has become a happy hunting ground for Djokovic, now with four of his six Grand Slam titles taken on the blue of the Rod Laver arena, and gradually the Serb is eating away at an Australian record. Roy Emerson won the last five titles here before the Open era, and Djokovic is the first since then to win three in a row.

In winning his fourth overall, Djokovic also equals the Open tally of Andre Agassi and Roger Federer and it was, appropriately enough, Agassi who presented this one to the new champion.

And with a cruel sense irony, it may have been Federer, and his resistance in the semis, that deprived Murray. When rivalries become as locked together, as that between Djokovic and Murray in the last year, a little good fortune can make all the difference.