Australian Open 2013: Marianne Bevis examines the top seeds from the men's and women's draw for this year's first Major 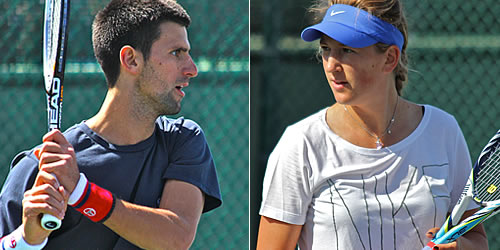 On the surface, the seedings for this year’s Australian Open have a very familiar look.

On both the men’s and women’s sides, they are topped by the current world No1s and defending champions: Novak Djokovic, three-time winner of the first Grand Slam of the season and unbeaten in Melbourne in the last two years, tops one list; Victoria Azarenka, who won her maiden Slam in Melbourne last year, tops the other.

But a close look shows that, while the men’s top 16—aside from injury issues through the last six months or so—has changed little, there are important developments on the women’s side.

First, the men. Djokovic reclaimed the No1 ranking, which he conceded for four months to Roger Federer at Wimbledon, at the beginning of November 2012 and went on to extend his lead by taking the title at the World Tour Finals in London. He therefore heads the seeds, just as last year.

Murray has enjoyed plenty of success in Melbourne, reaching the final in 2010 and 2011, and last year losing to the eventual champion, Djokovic, in one of the matches of the year. He led by two sets to one before losing in the fifth, 5-7, in little short of five hours.

Murray is the only one of the “big four” to play the main tour before the Open begins, defending his title in Brisbane—though Djokovic warmed up at the Hopman Cup and the exho showdown in Abu Dhabi, which he won.

The most notable absentee is world No4 Rafael Nadal, champion in 2009 and runner-up last year after seven minutes shy of six hours. He will miss his second straight Grand Slam, having missed the latter half of 2012 with on-going knee problems. He then suffered a stomach virus that hindered his preparation for the Australian Open.

Nadal’s absence gives his compatriot, David Ferrer, the No4 seeding. After his best ever season during 2012—Ferrer led the men’s tour with seven titles and 76 match wins—he will also overtake Nadal in the rankings for the first time in their careers during the Australian Open.

Ferrer has already opened his 2013 campaign with a semi-final finish in Doha and this week is aiming to win his third straight Auckland title.

Another man to benefit from Nadal’s absence is the Chennai champion, Janko Tipsarevic. He is ranked No9 this week but creeps into the No8 slot in the seedings and cannot therefore meet a higher ranked player before the quarterfinals.

Stan Wawrinka has similar good fortune, taking the No16 spot from a ranking of No17. Back in the top 16, after missing the tournament due to injury last year, is Marin Cilic at No13. Conversely, last year’s No15, Andy Roddick, has now retired.

Meanwhile, at the seedings cut-off point, Marcos Baghdatis rose five places in the rankings this week, courtesy of a semi finish in Brisbane, to nab the No29 spot, and Marcel Granollers, ranked 34, took the last seeded place as a result of Jeremy Chardy, who lost in the first round of Doha, dropping five places this week.

Significant 2012 seeds who do not make the cut this year are Mardy Fish, still troubled by heart problems, and Gael Monfils, who has slipped to 99 in the rankings due long-term knee problems but is attempting his comeback.

On the women’s side, however, it has been ‘all change’ since this time last year. Azarenka is the expected No1, but she entered last year’s tournament as No3.

Petra Kvitova, the most impressive riser of the second half of 2011, was seeded No2 in 2012 Australian Open and tipped for the title, but Maria Sharapova beat her in the semis—and again in the semis at the French Open—and, in between, she Kvitova only six tour matches. She is seeded No8 this year.

And top of last year’s pile was Caroline Wozniacki but her sliding form has taken her to No10 and facing a higher seed to reach the quarters in Melbourne. Sam Stosur finds herself in the same position, slipping from No6 to No9, and last year’s No7, Vera Zvonareva, is out altogether.

Sharapova’s 2012 resurgence takes her to No2 rather than No4, while Agnieszka Radwanska is seeded to reach the semis this year compared with the quarters last. She has also just won the Auckland title.

But the most significant change in the top eight is the return of Serena Williams. She entered last year as No13, having only returned to the tour in the summer of 2011 after a year’s absence. Now she is No3, has just won the Premier event in Brisbane to notch up 52 wins in her last 54 matches, and has only ever lost three matches to the women above her—and none since 2009.

Other dramatic arrivals since last year are Angelique Kerber—up 25 places to No5—and Sara Errani—up 20 places to No7. In the opposite direction, all from the No8-16 range, to be unranked this year, are Andrea Petkovic, Francesca Schiavone, Sabine Lisicki and (now retired) Kim Clijsters, while Jelena Jankovic drops from 14 to 22 and Anastasia Pavlyuchenkova to 24 (though she made the seedings by the skin of teeth with a 12-place rise this week after reaching the finals in Brisbane).

Other last-minute arrivals in the 32 are teenager Sloane Stephens and Mona Barthel, both courtesy of semi finishes in Auckland last week.