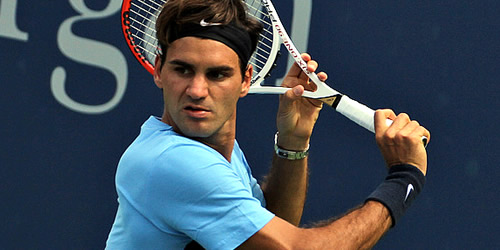 Roger Federer is through to the fourth round in Melbourne Photo: Marianne Bevis

There had been plenty of hype about the third-round meeting between Roger Federer and the ‘next-big-thing’ Bernard Tomic.

The profile of the 20-year-old was done no harm by winning his first title just ahead of the Australian Open. It was lifted still more by his straight-sets win over Novak Djokovic at the Hopman Cup. And it was further increased by the style of his first two wins in Melbourne: 28 winners to 15 errors in his first match; 26 aces, 59 winners and just 34 errors in a testing four-setter.

Much of the hype, though, had come from the man himself—bursting with talent and bursting with enough confidence to sink a battleship.

Asked about a repeat of his meeting with Federer here last year, he fired an open salvo:

“This is the perfect time to play him. I think I’ve got a good attitude to win. I’ve beaten a lot of good players over the last past two weeks, especially Novak. I think I can do it if he wins his match. I’m ready.”

Words on his own website veered from confidence to arrogance: “Tomic is quickly establishing himself as the next great player in the world of tennis.”

For a man now 6ft 5in tall who played his first home Slam at the age of 15, perhaps such hopes are justified. But while Tomic had indeed arrived on the crest of the wave having risen 21 places in the rankings last week, he surely recognised as much as anyone how great a task he faced.

One more thing: Federer had 880 match wins under his belt, and was playing for his 250th win in a Grand Slam.

He was fully aware of the hype, too, but deflected it like a deft drop shot played off a full-blooded forehand:
“I guess he’s learned a lot in the last year. It’s nice he’s been able to turn it around after a tough end of the last year. It seems he’s playing well.”

The first test for both men came before the match began—and it was won by Federer: the loudest reception into Rod Laver arena.

The next test was the first point: A forehand winner from Federer won that too.

The Swiss made the first foray to the net, and also won that with a forehand volley.

And he proceeded to win the first game, a break, in just two minutes. Tomic looked at his opponent with daggers. Federer’s face was a closed book.

But a reminder of the younger man’s talent was not long in coming. A missile of a forehand passed Federer at the net, but the Swiss held for a 2-0 lead.

The set rocketed by in quick-fire rallies. Neither man bothered much with the towel nor with ball-bouncing, both happy to play first-strike tennis. In under a quarter of an hour, it was 3-2.

As Tomic settled into the pace, the margin between them grew smaller. Federer was pushed to deuce in the sixth, Tomic served to love in the seventh, and Federer defended deuce again in the next. Tomic also fought off a set point at 3-5 and then edged to 30-15 on the Federer serve, but the Swiss compensated with three big serves to take the set, 6-4.

Tomic was certainly living up to some of the hype: He had won 32 points to Federer’s 35, and he was not for turning in the second set.

Federer had the chance of an opening break again, but this time Tomic came up with a great cross-court winner, and he served out the hold.

Federer passed up another chance to break in the third game with a wayward forehand, and a delightful drop shot from the other side showed just how good both the Tomic footwork and hands are. Federer was left rooted.

Serving at 4-4, Tomic faced three break points and four deuces, but stepped in confidently at every challenge. So Federer found himself in a tie-break having failed to convert five break points in the set. On the plus side, he had also dropped only five points on his serve.

That became six points with his first delivery when Tomic returned a bullet of a Federer forehand with interest. And a couple of great net finishes took Tomic to 4-1.

Federer had to pull out the big guns: two serves, two winners. Then in the longest rally of the match, 28 strikes, Federer’s defence-turned-attack drew an error and they were back on level terms, 5-5. In just shy of an hour, Federer sealed the set, 7-5.

It had turned cool, and Federer now sported an undershirt for warmth. His serve cooled, as well: two double faults in the opening game to face his first break point of the match. He survived it, though, and quickly took advantage of a cooling on the Tomic side as well.

With 38 winners apiece, Federer earned a break point, a 39th winner from Tomic saved it, another from Federer screeched past Tomic for another advantage. This time he converted for the first break since the opening game of the match, and proved to be the decisive one.

Federer pulled away, making fewer errors—just six to the less experienced Tomic’s 14—and more winners. He broke again in the sixth with an elegant drive volley, and served out the match, 6-1.

This must surely have been a satisfying win for Federer against an opponent more than a decade younger, partly because of the pre-match build-up but partly because it drew out his best tennis and the tightest focus thus far. He said as much, in his generous words afterwards: “He really got the best out of me tonight.

“He’ll be tough to beat in the future. You improve extremely fast when you’re his age.”

There was, of course, no need for any ‘alpha-male’ comment—the tennis had done Federer’s talking, as had the stats that followed.

This was his 250th Grand Slam win, well clear of the next man, Jimmy Connors. He reached his 35th consecutive second week at the Majors—the last time he lost in the third round was at the 2004 French Open. And he consolidated his unbeaten record against men born in the 1990s, 13-0.

That record will be challenged again in the fourth found when he faces arguably the best of the group, Milos Raonic. Their three meetings, all last year and each on a different surface, went to three sets and twice were decided by a tie-break.

Federer will have to win more than three out of 19 break points—though he will be offered far fewer chances than that against one of the best servers in the game. He will, though, draw considerable confidence from his own miserly offerings: just one break point chance offered to Tomic, none to Nikolay Davydenko and three to Benoit Paire. He lost none of them.