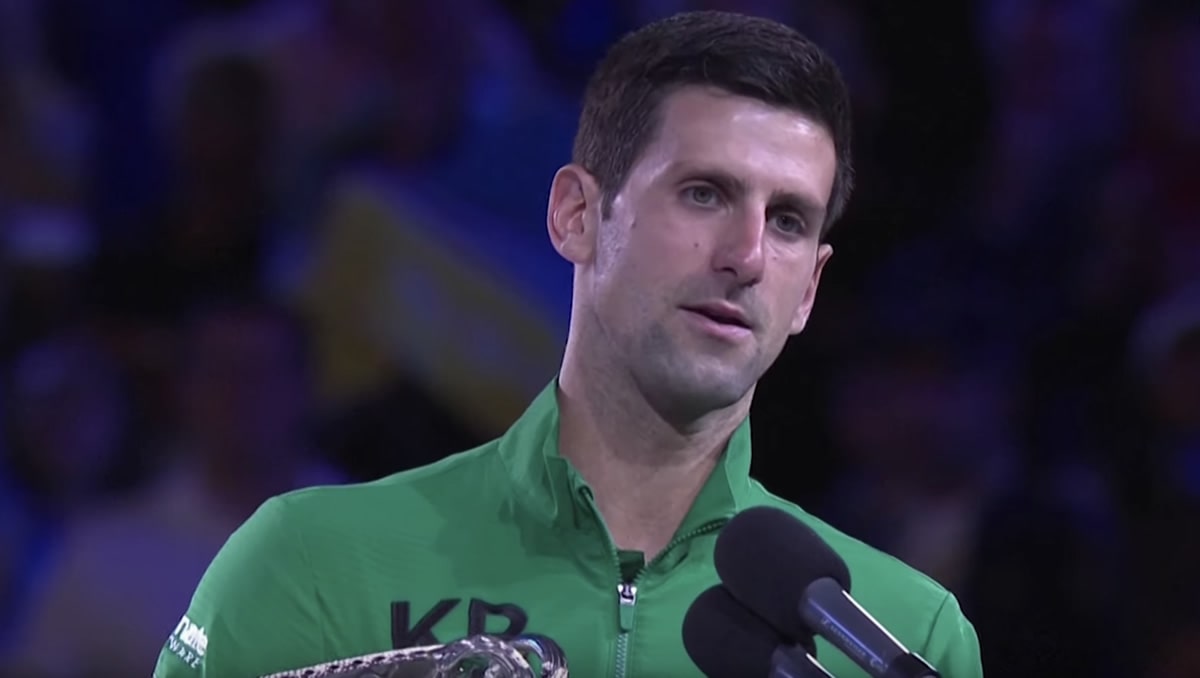 After No5 seed Dominic Thiem reached his third Major final with two lung and leg-busting victories over Rafael Nadal and Alexander Zverev, he gave a rueful smile:

He had a point. Four years in a row, the 26-year-old Austrian had reached the semis at Roland Garros, advancing to the finals in the last two—both times facing the undisputed king of Paris. Nadal had notched up a 93-2 record at the biggest clay tournament of them all with his 11th and 12th titles.

Now Thiem, having reached his first Major final on a hard court, faced the 68-8 record and seven titles of Novak Djokovic. For Melbourne Park was arguably the Serb’s favourite venue, and Djokovic was already showing his fondness for the Rod Laver arena with seamless progress to another final—and with both a record eighth title and the No1 ranking in his sights.

They had met 10 times before, and despite Djokovic leading 6-4, Thiem had won four of their last five matches, including twice in those Roland Garros runs. But the problem was invariably the same for any challenger with hopes of winning a Major: the barrier of the ‘big three’, who had won the last 12 Majors and accumulated 55 Majors between them. Indeed, not since Marin Cilic in 2014 had a new name broken the stranglehold.

Thiem, in two of his last three runs in Paris, had faced both Djokovic and Nadal, beating the former on both occasions. Now the coin was flipped: He had beaten Nadal first in Australia, after 4hrs10mins, and now had to try again to become just the second ever player, after Stan Wawrinka to beat both Djokovic and Nadal at the same Major.

The Austrian, though supremely fit, had one more problem. He had beaten three top-10 players in the course of five days, had spent more than 18 hours on court, and enjoyed just one day of recovery before Australia’s ultimate test. Djokovic, with two days’ respite since his three-set win over a below-par Roger Federer, had spent a full six hours fewer on court.

Thiem insisted that it would not be a factor:

“With all the adrenaline and everything, it’s going to be fine. I played two super intense matches against Rafa and now against Sascha [Zverev]. So of course I’m going to feel it… But [I’m] going to have great treatment, easy hit tomorrow, and then of course try everything to be 100 percent on Sunday night.”

Nevertheless, he did not begin the match as explosively as Djokovic, who was ruthless from the first game, determined to test all the hours in those Austrian legs. His drop-shots were out in force, and he worked Thiem through three deuces on his first serve and broke. A swift hold, and the defending champion was up 3-0 up.

Thiem had to survive another test in the sixth game, as the killer drop-shots continued to take a toll, combined with pin-point accurate strikes by Djokovic from corner to corner. Already Djokovic had dropped only three points on serve, Thiem 13.

Against play, though, Thiem worked two break chances in the next game and broke, and suddenly it was back at 4-4—but not for long. Thiem could not hold off another onslaught as he served to save the set. Faced with a second break point, he double faulted: First strike to the defending champion, 6-4.

Whether it was fatigue or nerves, Thiem put it behind him and cracked open a couple of backhand winners down the line. He got to break point, saved by Djokovic, but earned two more. Djokovic shrugged at his box, as if to say there was little defence against such a backhand, and then—as Thiem had done—double faulted to concede the break.

Thiem was now flowing and his serve improving. A love hold was followed by a hold to 15, 3-1, and although the Djokovic defence was still formidable, a few errors began to pepper the Serb’s game. But he held strongly, again finding aggressive angles to the one-handed Thiem backhand, and held.

The Austrian was expending a huge amount of energy to keep Djokovic at bay, and could afford no errors. He came to the net to put away a couple of great smashes, but the need to fire down big serves produced another double fault for break point in the sixth game, saved with a big forehand winner. However, every point was a battle, and for a second time, the Austrian faced break point as his backhand twice went astray. Djokovic had the break back, 4-4.

They went at it hammer and tongs in a 29-shot opening rally to the next game, Thiem making the first error. But he edged two break points after a Serbian double fault and netted drop shot. Now the clock counted against Djokovic, too, and he was docked two time-violations to concede his first serve—and he faulted. Thiem had the break again, and Djokovic gave a sarcastic thumbs-up to the umpire.

But could the Austrian hold his serve this time? The answer was a resounding yes, 6-4, and Djokovic went off court with his kit bag for a comfort break. He needed to calm the head and regroup, but he seemed still to be stewing over the second-set conclusion when he readied to play the third set. Thiem broke in the first game.

The Austrian faced break-back point after a deft drop-shot from the Serb, but a one-hander down the line saved him.

Thiem was still breathing heavily between points, but Djokovic was still conceding too many easy points, a double fault contributing to another break—the third in a row.

The Austrian was playing a smart game, varying pace, finding a timely lob, switching direction off both wings. He fended off 0-30 and went 4-0 before Djokovic got some leverage with a hold—and then consulted the doctor.

Thiem held to love for 5-1, but again the nerves surfaced as he attempted to serve out the set—a double fault on his second set point. And Djokovic was now starting to play with first-strike freedom, saving a third set point with a backhand winner down the line. The champion then earned a break-back chance as the game extended to seven minutes, but Thiem earned a fourth chance for the set, and finally took it, 6-2.

Djokovic left the court again, this time with a doctor, and on his return, had clearly determined to go on the offensive, shorten points at the net, take the attacking initiative. He fended off one break point, held to love, and gradually seemed more settled and solid in his baseline play and serve. Thiem needed to ready himself for the imminent threat.

The Austrian fended off deuce to hold, 3-3, but sure enough, the threat was realised, a nervy double fault from Thiem brought up two break points, and Djokovic seized the initiative to break, 5-3. With a perfect service game, the champion had levelled the match, 6-3, and looked a different player: cool, calm and collected, with the shot-making to match.

And now those extra six hours on court began to play their part. Thiem’s energy and explosive accuracy dropped a notch, and he was forced into errors: from 30-15, he made three forehand errors on the bounce to concede the break, 1-2, in the decider. He errored again on a break-back chance in the next game, then made a backhand error on a second opportunity. There was no way through.

Djokovic strode around the court as though he owned it again—which he did. And that calm confidence translated into better serving—he dropped only three points in 19 first serves in the set. Thiem summoned a point from a 29-shot rally at the start of the eighth game, but the door was swiftly slammed by Djokovic: 5-3. And as the clock hit exactly four hours, the defending champion served out his victory, 6-4, to become the reigning champion for an eighth time, and also the world No1 once more.

It has been a remarkable start to 2020 for Djokovic. He went unbeaten through the ATP Cup, with wins over three top-10 men, including Nadal. Now he extended his unbeaten run in Melbourne to 14—the undisputed king of the Australian Open.

Thiem made a heart-warming speech in defeat, praising his opponent but also putting his loss into a far wider context:

“You—and also two other guys—have brought men’s tennis to a new level, and I’m proud and happy that I can compete in these times and period of tennis.

“But I think we all saw before the tournament that there are far more important things in life, and what this beautiful country is going through is very tough, and I think the Australian Open is a great distraction. But I hope Australia will recover very soon and a disaster like this never happens again.”

“There were some devastating things that started 2020, bushfires here in Australia, conflicts in parts of the world, one person that was a mentor to me, Kobe Bryant, passed away. I would like to say that this is a reminder to all of us we should stick together more than ever, be with our families, stay close to the people that love you, that care about you, there are more important things in life and it is important to be conscious and humble about things happening around you.”

“This tournament [is] definitely my favourite in the world, and I am blessed to hold this trophy once again.”

And so, the long wait for a 150th different champion in the Grand Slam record books must wait a little longer. Perhaps Thiem can, at his third attempt, dethrone Nadal at Roland Garros—but don’t bet your house on it.