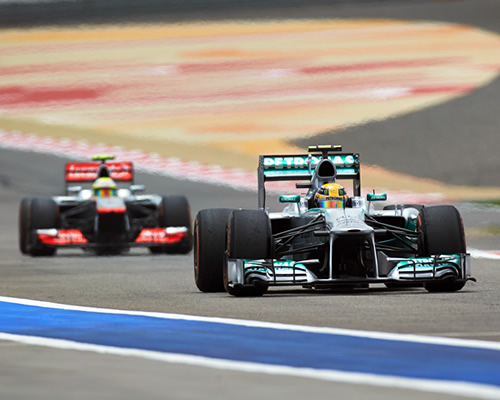 It was a tale of two drivers for Mercedes in Bahrain as Nico Rosberg took only the second pole of his career, while Lewis Hamilton suffered mechanical problems.

The German was impressive throughout qualifying set an unbeatable Q3 time of 1:32.330, yet Hamilton will start in ninth after changing his gearbox due to a tyre fault in practice.

“I really want to kickstart my season,” said Rosberg. “It has been a rough ride in the first three races.”

The day started slowly as the big contenders stayed inside for the opening nine minutes in Q1, leaving the two Saubers – out almost immediately – to post times on the empty Sakhir racetrack.

Merecedes’ Rosberg set the early pace with 1:33.364 despite complaining about a foreign object in his car but was soon pipped by Alonso, who managed 1:32.878.

Yet the story of Q1 was the continued absence of the Red Bulls and Hamilton, while Mark Webber only set a lap-time with four minutes remaining – Vettel two minutes later.

However, the triple world champion posted a competitive time of 1:33.327 to move up to second in Q1 – Webber took ninth.

And Hamilton left it even later, posting a time of 1.33.498 with only a minute remaining to book his place in Q2.

In Q2, Force India’s Paul Di Resta took a surprise lead with a time of 1:33.335, over a tenth of a second faster than nearest competitor and eventual leader Vettel.

But Q2’s drama was far from over as Rosberg sprang an impressive 1:32.867and Jenson Button and Kimi Raikkonen saved themselves from elimination at the death.

Rosberg set his stall out early in Q3 with a leading time of 1:32.543, but with two minutes left all ten cars made it to the track for a grandstand conclusion.

The remaining drivers – including both Force Indias – found it hard to reach Rosberg’s marker, with Vettel unable to match his compatriot and finishing second.

Alonso took third spot and Hamilton will look back on a day well-salvaged having placed fourth – docked down to ninth after his gearbox change.