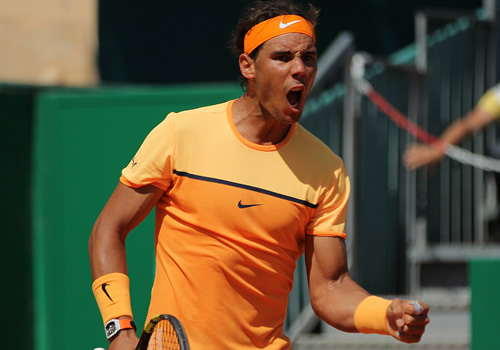 For more than a decade, it has been a rare year at the Barcelona Open that Rafael Nadal has not lifted the trophy at the prestigious ATP500 event held at the oldest tennis club in Spain.

Between his first title in 2005 and his last title in 2013, only one other man won in Barcelona—and that was in 2010 when Nadal did not play.

But what of the last two years, when Nadal did play but when it was another man who survived the 48-man draw? What’s more, it was the same man who won in both 2014 and 2015, Kei Nishikori, but on neither occasion did the talented Japanese man, who has been resident in the top 10 for almost two years, have to play Nadal.

Instead, the Spaniard, unusually, lost to lesser-ranked players: to Nicolas Almagro in the quarters in 2014 and to Fabio Fognini in the third round last year.

The surprise losses on his beloved clay and at the tournament closest to home were, though, affirmation of difficult times for Nadal as 2014 slid into injury and illness that took much of last year to counter.

This year, however, with Nadal’s form and confidence on the rise, the draw seemed set to bring the two most recent Barcelona champions together for the title bout.

For the second-seeded world No6 Nishikori, who was the only top-10 man aside from an injured David Ferrer to bypass the optional Monte-Carlo Masters, this was his first clay tournament of the year. So after a heavy hard-court season that included the Memphis title, a final run in Miami and some tough indoor matches in Davis Cup, he arrived for the defence of his title fresh and fighting fit.

And it showed in the crisp, attacking tennis that swept past four opponents of the calibre of No11 seed Alexandr Dolgopolov and No6 seed Benoit Paire without dropping a set. He reached his third final in a row, his 14th consecutive win in Barcelona, having won 13 sets in a row.

The semi-final victory over Paire in particular, achieved in a blistering 67 minutes and with some very sharp line-hitting plays, alerted the Spanish crowds that even the revived form of Nadal would be severely tested come the final.

Nadal, for his part, was certainly returning to the kind of form that took him to a record ninth Monte-Carlo title a week ago, his 48th clay title, and thus to within touching distance of the Open era record set by Guillermo Vilas at 49.

He dispatched Fognini, who proved a thorn in his side three times out of five meetings last season, with flashes of the strutting Nadal of old—though a few wayward points opened the door for Fognini to take the second set to a tie-break.

Now, Nadal had to take on the craft of Philipp Kohlschreiber, seeded 10 and into his second Barcelona semi-final after an impressive run against Spaniards Pablo Carreno Busta and Feliciano Lopez, and he conceded only four games to No16 seed Andrey Kuznetsov.

But Nadal on clay and with a home crowd posed an altogether different test for the single-handed German. Twelve times they had met, and only once had Kohlschreiber come out the winner, and that in their only grass encounter four years ago. But in all four matches on the red stuff, he had never won a set, nor even reached a tie-break.

This one would look little different. Nadal broke in the sixth game for 4-2 and served out the first set, 6-3, with not a break point in sight for Kohlschreiber.

In the second set, with almost an hour on the clock, the German did threaten in the fourth game, but Nadal saved a break point and immediately turned the tables on Kohlschreiber.

Two delightful cross-court backhands saved the German, only for a double fault to put him back to deuce, his 28th unforced error of the match. A lasso forehand onto the baseline from Nadal brought another break chance, but again the German survived with a timely ace, but it was not long before he was defending his serve again.

Some determined defence and retrieval by Nadal in the seventh game forced Kohlschreiber to greater effort, kept him pinned way behind the baseline, and drew errors on his serve. At the second attempt, Nadal broke for 4-3, held, and then broke again courtesy of three pounding forehands, 6-3.

The German had made far too many errors when put under pressure—37 to just 17 winners—while Nadal’s tennis was a well-balanced mix of defence and attack, winners to errors: 18 to 17.

The eight-time champion, then, will take on the two-time defending champion, and he holds an 8-1 advantage over Nishikori. That, however, hides their recent story. The two men have shared the honours in their last two meetings, both on hard courts, and in their last clay meeting, in the final of the Madrid Masters in 2014, Nishikori was in command until hit by a back injury that forced him to retire at 0-3 down in the third set.

For both, then, a final face-off between Barcelona’s most recent champions is very timely indeed—coming just a week before they both head to Madrid.

Recording-making Rafael Nadal back where he belongs on Spanish clay: the champion