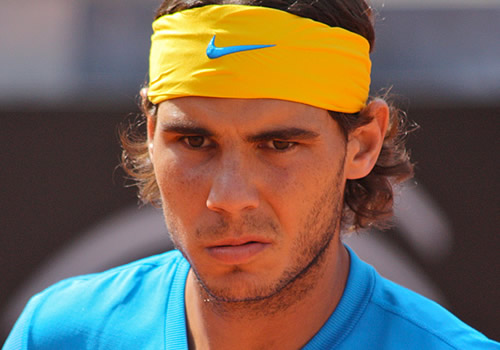 For the 16-year-old Rafael Nadal, 2003 would become a significant year in his tennis career.

It marked the transition from the Futures and Challengers circuits—he had played and won just one main tour match, in his home of Mallorca in 2002—to the full ATP circuit. The Monte Carlo Masters would be his first big tournament of the year, and he lost to Guillermo Coria in the third round. Famously, he did not lose another match there—a run of 46 wins—until last week.

His second event of the 2003 main tour was in Barcelona, and that proved to be a similar story. He lost in the second round to Alex Corretja, and would not lose there again—well, he has still to lose another match in Barcelona.

He next took his racket to the prestigious Real Club de Tenis Barcelona in 2005 and won, and apart from 2010 when he did not play, he has won every title there since. A decade after his first appearance, then, Nadal hopes to make it an eighth consecutive title.

Yet despite his record at the Barcelona 500, he finds himself, this year, in a rare situation. For the first time since he won that title as a lowly No8 seed in 2005, he is not the top seed. That honour, with a touch of irony, perhaps, has gone to the man who has more reasons than most to despair of his ill fortune in Barcelona.

Back in 2005, the 31-year-old David Ferrer was an even more lowly No13 seed who lost in the third round, but he went on to enjoy more success in Barcelona than almost anywhere else. In 10 appearances, he reached six straight semi-finals and went on to four finals—and he lost in each final to the man who has cast such a long shadow over his career, Nadal.

Finally, this year, one of the most consistent, resilient and hard-working men on the tour emerged from that shadow. He rose ahead of Nadal to No4 in the rankings in January to become the top-ranked Spaniard for the first time in his career. And although he was given a leg-up courtesy of Nadal himself—absent for seven months with a knee injury—few would deny that the late-maturing Ferrer deserved every bit of good fortune that came his way.

Last year he put together perhaps his best ever season: a tour-leading seven ATP titles, his first Masters trophy, more match-wins than anyone, male or female, and his best ever Grand Slam results—two quarters and two semis.

2013 started just as strongly with a semi finish at the Australian Open, two titles and two more finals, one of them the Miami Masters. And until he withdrew from Monte Carlo as a result of an injury sustained in that gruelling Miami final, he again led the tour in match wins.

But his ambitions in Barcelona have yet again been thwarted—and not this time by Nadal. He suffered his first opening-match defeat since losing to Todd Martin in 2004, and did so to the No66 ranked qualifier, Dmitry Tursunov, in three sets.

Ferrer, clearly losing the clay-court momentum he built through the South American swing after he was sidelined by the North American hard-court Masters, did not play his best, but he opened the door for the next highest seed in the top half of the draw, fellow Spaniard Nicolas Almagro.

The No4 seed, like Ferrer, has enjoyed success in Barcelona, with semi finishes in 2006 and 2011. He was beaten on those two occasions by…Nadal and Ferrer.

Like his two higher-ranked compatriots, Almagro has a strong clay pedigree, ranked third among active players on clay, 219-102. More surprising, he leads the tour for aces served: 283 so far.

He has already reached the quarters with little trouble, scoring straight-sets wins over first Ivan Dodig and then Marcel Granollers, but the hurdles now become higher: He plays the fine clay exponent, No7 seed Juan Monaco, in what has, nevertheless, become the easier looking half of the draw.

Nadal, in the bottom half, had no problems in his opener against Carlos Berlocq, even though the Argentine took him to three sets in the quarter-finals of Sao Paulo in February. Nadal’s 88-minute win, 6-4, 6-2, ensured that he continued one more record in his Open-era 270-21 clay run: He has never lost back-to-back clay-court matches.

Nadal commented on the wind that blustered around his first match: “The conditions today weren’t comfortable. There was a very changeable wind that made it difficult to play at a high level.”

That wind remained gusty, and the air that had been just a little damp in this Mediterranean corner of Spain turned torrential ahead of his Paire match: It was halted before it had even begun.

However, if Nadal does not feel at home here—just a hop, skip and a jump from his beloved home just across the Balearic Sea—he will not feel at home anywhere. And with no Djokovic to ruffle his feathers, he will surely be hot favourite to end the week with Barcelona title number eight.

Ferrer, meanwhile, still stands 850 points above Nadal at No4 in the rankings, and is favourite to stay there until the French Open. For even if Nadal wins in Barcelona, he still has to defend his Rome title and do considerably better in Madrid than his third-round exit last year to stand a chance of overtaking his colleague—and that presumes Ferrer falls very early in both those clay Masters.