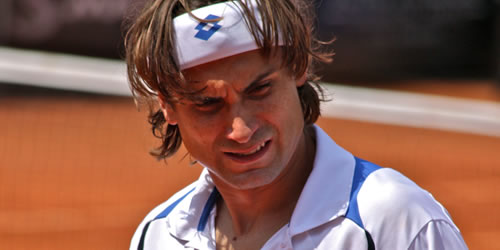 When the tennis gods handed out fighting spirit, they gave the biggest helpings to two Spanish men.

Rafael Nadal and David Ferrer are the kind of players who would rather leave the court on their knees than concede defeat: are the kind of sportsmen whose will to win demands respect even before their talent, fitness and intensity are added to the scales.

And yet one had been destined to set record after tennis record while the other was always lived in his compatriot’s shadow.

They may have turned professional within a year of each other, but the younger by more than four years, Nadal, went on to dominate clay like no other—and then conquer other surfaces, too.

A lesser man than Ferrer, turned 30 this month, might therefore have accepted the slip in his rankings from the top five in 2008 to outside the top 20 during 2009.

He might have looked at the dominance of Nadal alongside Roger Federer, Novak Djokovic and Andy Murray, and at the new men surging past him—Juan Martin del Potro winning the US Open and Tomas Berdych and Jo-Wilfried Tsonga both Grand Slam finalists—and accepted the new order.

But Ferrer is cut from a different cloth. In 2010, he gave himself a year to find his feet again, won two titles after a year with none, reached the finals in three more events, including his first Masters, and was back in the top 10 by year-end.

He did not stop there. By the end of 2011, he was in the top five again, courtesy of six more finals, two of them Masters and two yielding titles, and was a semi-finalist at the World Tour Finals. He capped the season with arguably his best match of the year, a five-set thriller against del Potro, to help Spain to Davis Cup victory.

The renaissance of Ferrer continued: three titles from his first four tournaments in 2012—his only loss until mid-March coming in the quarters of the Australian Open to Djokovic.

Through all this, though, he has remained Spain’s second string. So it may be no surprise that, coming into the history-filled Real Club de Tenis in Barcelona, this most quietly-spoken of players revealed that winning this particular title would be the crowning achievement of his career. Six times in a row he had reached the semis, three times he had played and lost to Nadal in the finals, and the draw in 2012 offered the prospect of the same final showdown again.

Ferrer sailed towards that meeting with two easy wins, losing only five games. He faced fellow Spaniard Feliciano Lopez and secured the only break of serve in two and three-quarter hours of outstanding tennis. And now he faced the best of the next generation of big-hitting, fast-rising young players, Milos Raonic.

Separated by almost a decade in age, by 8in in height and around 25mph in serve speed, it was a match of contrasts: Ferrer, raised on clay, at home on clay, a hustling, intense pocket dynamo of a player; Raonic, with arguably the biggest serve-and-volley power on the tour, a quietly contained man who already owned two 2012 titles on hard courts.

And Raonic began where he left off against Murray in the quarters, with a first delivery of 146mph. His second serve, a little slower, was finished at the net with a volley winner. His third was a forehand winner onto the baseline. His fourth was an ace of 145mph. And this was on clay, on a cool and damp afternoon.

But the word “intimidating” does not feature in the Ferrer vocabulary. He responded in superb style with two love service games of his own.

The outlook changed in the fifth game when Ferrer faced two break points, but his experience shone through as he played a patient, tactical game to hold. Again in the seventh, he faced the same threat and resisted, playing deep to the more vulnerable Raonic backhand.

The young Canadian came into Barcelona with a tally of 333 aces for the season—the highest match average on the tour—but in the eighth game, Ferrer started to pick up his deliveries. He pulled Raonic back from 40-0 to earn two break points, but he could not convert.

Ferrer, holding his own serve with relative ease, applied the pressure again as Raonic served at 4-5. The Spaniard made three great returns of serve to earn three set points, but the tall man saved them with some aggressive serve-and-volley work, survived four deuces and levelled.

A lesser man than Ferrer might have wavered after losing chances to take the set but concentration and tenacity are perhaps the Spaniard’s greatest assets. He scampered through his own service game with clever patterns of ground stokes and closed out a love hold with a volley finish.

Again the Spaniard looked as though he would break his young opponent at 6-5, but a calm Raonic placed a 145mph serve wide, unleashed a 148mph serve down the middle and held with a strong forehand winner.

A tie-break against such a serve was far from ideal but Ferrer carried the momentum from all his break point chances into a decisive—and impressive—6-0 lead. Even after a first double fault took him to 6-2, the Ferrer body language did not falter. He stepped straight up to the service line to win the next point for a one set lead. It had been one hour of compelling tennis.

In the second set, neither man found room for manoeuvre. Ferrer faced deuce in the second game, Raonic in the ninth, but not until 5-5 did a break point appear—the result of a forehand cross-court winner from Ferrer as fast as any Raonic had played in the match. But still they headed to a tie-break, and this one was much tighter than the first.

Eventually Ferrer worked a 6-4 advantage on serve. Raonic saved the first match point with a Djokovic-like cross-court bullet but he could not do it again. Ferrer made a winning backhand down the line to conclude two hours of high intensity tennis in which the all-court craft, base-line aggression and never-say-die defence of Ferrer proved equal to the attention-grabbing—and constantly improving—tennis of the Canadian.

Ferrer had to wait a couple of hours to confirm what most expected: his fourth Barcelona final against the same man.

Nadal raced through the first set of his semi against Fernando Verdasco in fearsome style: under half an hour, 10 points conceded, 6-0.

It was an increasingly edgy Nadal who crept his way through the second set, facing a handful of break points but making the decisive break himself in the fifth game. Verdasco, despite some flurries of winning forehands, could not convert his chances, even given the opportunity to break back in the final game of the match. All the confidence lay with Nadal, all the doubts with Verdasco, and it ended just as their previous 12 matches had done, with a win, 6-4, to Nadal.

When Ferrer faces Nadal in the final it will be in the knowledge that arguably the best clay-court player of the Open era remains an insurmountable barrier to his much-desired Barcelona title. Nadal is on a 20-match winning streak on clay since Rome last year, has just won his eighth Monte Carlo Masters and is on a 33-match-winning streak in Barcelona. What’s more, Ferrer has not beaten Nadal on clay since their first meeting in 2004 and has only ever won four of their 17 matches.

And yet…Ferrer is playing possibly the best tennis of his career, is serving better than a 5ft 9in man has any right to do, is attacking the net more often and with more success than ever before and seems to have, if this is possible, more focus and more desire than he has ever had.

It could therefore be now or never for Ferrer to step out of his compatriot’s shadow.