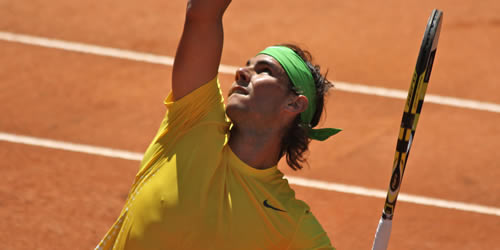 David Ferrer had hoped that this day would prove to be a special one for him.

Ahead of the 60th edition of the Barcelona Open Banc Sabadell, in Spain’s oldest and most prestigious tennis club, he made it clear that winning this particular trophy would mark the pinnacle of his tennis career.

For Barcelona has offered the Spaniard the promise of success more often than almost anywhere else: six straight semi-finals and now his fourth final in his 10th appearance at the tournament.

The 30-year-old Ferrer also happened to be playing as well as, if not better than, he had in years. With three titles and the most match-wins on the tour in 2012, the Barcelona title would take him to a personal best of four trophies in a single year.

His problem though—as it was in all three of those previous Barcelona finals—was the most successful clay court player of the Open era, countryman Rafael Nadal.

Fresh from a record-breaking eighth straight title at the Monte Carlo Masters, Nadal still had targets of his own to reach. He had won six straight times in Barcelona (he did not play in 2010) so brought a 33-match winning streak to the Real Club de Tenis. With a seventh title, he could become the first player in the Open era to win two ATP events seven times.

Nadal was also marking a very special 10th anniversary. On this very day, in 2002, a 15-year-old Nadal won his first ATP match at the Mallorca Open. Ten years later, he was aiming for his 48th title in his 69th final.

Could Ferrer, who had not beaten his Spanish rival on clay since their first meeting in 2004, finally find a way through his formidable rival?

When he opened the match with a double fault, it looked as though the task was too great before he even began, but Ferrer is, with Nadal, one of the most focused, never-say-die players in tennis. He gathered his wits and held.

He also showed, as he had against Milos Raonic in the semis, a willingness to go on the offensive. He fired a searing cross-court winner past the advancing Nadal to bring up three break points in the second game and pounced on his opponent’s serve to force the error.

Ferrer led 2-0 and tried to keep the pace up, but he just over-reached and made enough errors for Nadal to break back.

Ferrer nevertheless continued to play confidently, angling his backhand, reaching his off-forehands with great footwork, throwing in deft drop-shots, and serving at well over 70 percent. He bristled with energy but looked as cool a cucumber while Nadal slowed the rhythm between points yet peppered the sun-dried clay with dark patches of perspiration.

Ferrer managed to force a way through the Nadal defence for another break point in the fifth game but, as would happen more than once, he pressed just a little too hard on the key points, as he later reflected: “I had chances in both sets, but he played better in the important moments.”

The better Ferrer played, the better Nadal responded, looking for chances to take on the role of aggressor and working his forehand deeper and wider.

With each man testing and probing the other, the quality rose as they jousted to 5-5—a purple patch in the match.

A running down-the-line forehand from Nadal in the 11th game gave him a break point but Ferrer responded with an outright forehand winner of his own. Having held at that crucial stage, a confident Ferrer again went on the attack with his backhand at 6-5 and earned a break point for the set. A Nadal forehand snuffed it out but Ferrer’s signature shot, the angled off-forehand, earned a second chance—and then a third and a fourth.

The crowd could barely contain their excitement when a shanked forehand from Nadal only just dropped in, only to then face a fifth break point. Eventually, a timely Nadal ace took them to a tie-break.

The killer instinct, sharpened from defending so many set points, lifted Nadal’s game while the frustration of failing to convert such valuable opportunities brought errors from Ferrer. It proved to be a fatal dip and Nadal rushed through the game, 7-1, for the first set.

And while Ferrer re-grouped well at the start of the second set, Nadal continued to raise the stakes, finding ever more weight and depth from the baseline. Ferrer faced an early break point in the fourth game and defended it with a strong volley put-away. But on the next, Nadal made the breakthrough for a 3-1 lead.

However, the defending champion could not afford to waver against such a resilient and intense opponent: He went 0-40 in the very next game and a poor netted volley handed the break back. With Nadal serving at 4-4, Ferrer then went on a run to lead 40-0. He bounced and bobbed like a prize-fighter, rushed the net and misfired a volley, but then Nadal succumbed to the pressure and double faulted. Ferrer had the chance to serve for the set.

It’s an oft-repeated mantra that champions know how to play the big points, and for the second time in the match, Nadal did just that. Once again, Ferrer pushed just a little too hard while Nadal defended like a demon, and the result was another break to level at 5-5. Now the six-time champion went for the kill with a love break: The set, match and title were his, 7-5.

Nadal was forced to play at his highest level to win his seventh Barcelona crown, and that will serve him well as he heads to Madrid and Rome to try and reclaim the titles he lost to Novak Djokovic last year.

For the moment, though, he luxuriated in a great win: “It’s almost unimaginable to win here seven times…To win at home in front of the people you know is always more special. The emotions are always high, but probably each year they get a bit higher as you are one year older and you don’t know how many chances you are going to have left.”

He went on to commiserate with a Ferrer close to tears: “It was a very equal match. I feel sorry for David and hope he can win here one day because he deserves it.”

It seems, though, that the only chance Ferrer will have to do so is when Nadal does not play—and ideally that would be next year while the older man is still enjoying the renaissance that has taken him to fifth in the rankings race.

But as long as Nadal is in the equation, it looks as though Ferrer may be destined to remain forever the bridesmaid of Spanish tennis.