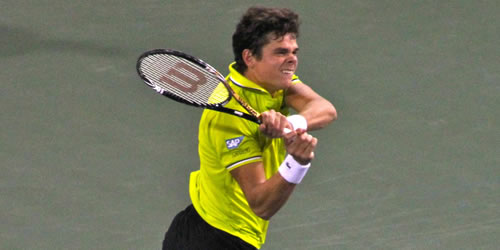 In beautiful Barcelona, the weather reflected a certain gloom. For a city so passionate about sport, the resignation of Pep Guardiola, coach and former player of its world-beating football club, was the latest blow to Barca residents facing possible defeat by Real Madrid in La Liga and beaten in the Champions League.

The skies over Spain’s oldest tennis club, on quarterfinals day of the Barcelona Open Banc Sabadell, were overcast, cool, threatening rain. The clay was deep orange rather than shimmering gold, the wrapped-up fans sunk deep into the violet-blue boxes.

As luck would have it, Barcelona’s tennis can touch the parts that other sports cannot reach. The quarters of this 60th edition of the Barcelona 500 held four Spanish men, all top-20 players, all handsome, popular and capable of bringing enough passion to their tennis to lift the deepest gloom.

First among them was the closest thing this tournament has to a local hero. Rafael Nadal, who lives a boat-ride from the Catalan coast in Mallorca, regards Barcelona as his home event. He happens, too, to be the finest of clay-court players who, fresh from his eighth straight title in Monte Carlo, is aiming to win his seventh in this illustrious venue.

Indeed not since 2002 has anyone outside Spain won this title, and not since 1996 has there been a final that did not feature a Spaniard—and the stage was set for the same scenario.

In Nadal’s half of the draw was world No20 and former champion Fernando Verdasco, the man to make hay in 2010 during Nadal’s absence.

In the bottom half, two “veterans” of the tour, both 30, both enjoying close to their best ever rankings, competed for a semi-final place: No6 David Ferrer and No16, Feliciano Lopez.

On current—and past—form, there was every chance that Ferrer would be the one to advance. Never had his compatriot, the big, left-handed man from Madrid, won a set let alone won a match against the clay-court terrier.

And so to the fourth quarter—a very different match-up between two men who play their best tennis on hard courts: Andy Murray and Milos Raonic. But here, too, there was some Spanish interest. The coach in Raonic’s box was former world No40 and title winner on clay, Galo Blanco. His opposite number, at the other end of the court, was three-time French Open winner Ivan Lendl.

When it came to player experience, the weight was all with Murray, too. Out of 33 finals—22 titles—Murray had never reached one on clay. But he had proved his credentials on the red stuff last year by pushing Novak Djokovic to the brink in the semis of the Rome Masters and Nadal to three sets in the semis at Monte Carlo. He also reached the semis at Roland Garros.

Raonic’s three titles in his short professional career had also come on hard courts but he came into this first head-to-head with a win-loss record almost identical to Murray’s, for Raonic is the most promising, and dangerous, new player on the tour. At 21, he has surged to 25 in the rankings from 156 at the start of last year. And if there was any doubt that his tennis could translate to clay, he beat current No13 Nicolas Almagro, whose 11 titles have all come on clay, in the second round in straight sets.

Any lingering doubts about his ability—on any court—were quickly dispelled. His first ace in his opening service game hit 141mph, and the opening serve of his second game topped 145mph. Even for a 6ft 5in man with 333 aces to his name this season, that was impressive on a cool day on clay.

But there is increasingly much more to the Raonic game than a big serve and clean volley. Come the seventh game, he chased down a Murray drop shot to earn a break point and converted it for a 4-3 lead. And the huge forehand that is such a weapon on hard courts proved very adept in their cross-court exchanges on clay, too.

In fact, he handled the surface with the calm composure of an expert, using skidding angles and sliced backhands to supplement his forehand passing shots. Raonic never looked like losing his serve in the opening set—he lost only one point out of 16 on his first delivery—and Murray did not come close to earning a break point. The Canadian took an impressive 6-4 lead.

The door opened a crack for Murray in the fourth game of the second set when Raonic fluffed a rare drop shot attempt, but two huge serves, at 143mph followed by 148mph, reclaimed control and another near-ace levelled the match on the dot of one hour.

Murray produced some magic of his own in the fifth with some scorching serving backed up by a couple of forehand winners to hold his easiest service game. He then earned another break point in the sixth, but yet again a 145mph serve, backed up by a searing forehand and a bullet of smash, closed the door.

The seventh game forced Murray’s hand, just as it had in the first set. At 15-40 down, he went on the offensive with his first serve and volley and held off the break, but only for a while. A sequence of stunning off-forehands produced a break point for Raonic in the ninth and Murray netted his own forehand.

On paper, Raonic should have served out the match with ease but, from nowhere, he fired two smashes long and Murray broke back to level, 5-5. It headed to a tie-break.

With serving like Raonic’s, the mountain was a formidable one for Murray, and sure enough the younger man ran to a 6-1 lead. Murray pulled back two points on serve but that was all. Raonic took his first win over a player in the top eight and looked every inch a top-8 player in the making.

Raonic’s reward will be a test of clay-court grit against one the home nation’s favourites. For it was David Ferrer who won that Spanish head–to-head in perhaps the most entertaining match of the day. He and Lopez served up two and three-quarter hours of all-court quality, of leftie versus rightie, of languorous serve-and-volleyer against the bundle-of-energy baseliner.

Lopez, on his 12th visit to Barcelona, had three match points to reach his first semi-final here but was thwarted by a Ferrer who converted his only break point in the match to win 6-7, 7-6, 6-3. Most tellingly, though, Ferrer not only out-aced his opponent, 7-2, but attacked the net more frequently and with greater skill than at almost any time in his long career.

It takes this most consistent and hard-working player to his sixth straight semi-final in Barcelona. Should he find a way through the Raonic weapons, he will expect, once again, to face the ultimate challenge. Nadal has the best match record on clay in the Open Era and has beaten the fourth semi-finalist, Verdasco, in all 12 of their meetings.