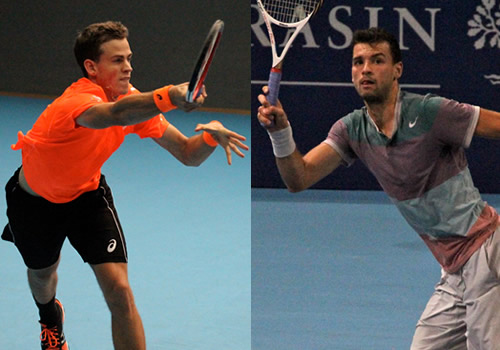 No doubt Roger Federer’s first look at the Basel draw was to check in which half he had landed: the one headed by the man who beat him to the title last year, Juan Martin del Potro, or the one containing the man who had beaten him in their last two meetings, Tomas Berdcyh. It was the latter.

The Swiss man’s focus may then have turned to the first line adjoining his: The die fell to Adrian Mannarino, beaten in each of their three previous meetings.

But Federer, like every other player on the tour, always refuse to look further: They ‘take each match as it comes’.

Now into the quarter-finals, however, Federer must have begun to take an interest in the names that lay ahead, and the draw makes fascinating reading: a look, quite possibly, at the next generation of tennis stars.

Federer’s next match offered up one of two young, talented, long-touted stars of the future, Alexandr Dolgopolov or Grigor Dimitrov.

Beyond that, the five-time Basel champion may have spotted that he could no longer face Berdych, nor the other seed in that quarter, Kei Nishikori. Instead, there was another ‘new kid on the block’: The gifted 6ft 4in Canadian Vasek Pospisil.

Although slower than Dimitrov and Dolgopolov to make his mark, the Pospisil promise showed early. Over two years ago, he put up a spirited fight in a 7-5, 6-3 loss to Federer in Montreal.

Sure enough, he climbed inside the top 100 last year with a series of Challenger titles plus the quarters in Kuala Lumpur, but was hit by glandular fever and missed the 2013 Australian Open.

Once back, he took up where he left off. A bold five-set loss to Mikhail Youzhny in the second round of Wimbledon returned him to the top 100, then he reached his first semi-final in Bogota. He saw this summer run as turning point:

“Around the time of Wimbledon, I felt I was starting to play really well, I was really very close to getting a top 20 player there in the second round. And that was when it kind of opened my eyes, but I was just trying to be patient and wait for a good tournament.”

That tournament happened to be on home turf: He reached the semis of the Montreal Masters, beating on the way his first top-10 man, Berdych. He credited his confident, aggressive tactics to fresh coach, Frederic Fontang:

“We are trying to add a level of aggression into my game and play faster…I have always had it in me to play aggressively, but I tended to be more passive.

“We have worked really hard to try and take my game to opponents. That means not getting bogged down in long rallies and striking the ball early, and on the rise.”

He lost to compatriot Milos Raonic in Montreal, but Pospisil’s enthusiastically attacking all-court game ensured he continued to stand out—that, and his huge smile and modest charm. Asked what it felt like to be stepping out of the Raonic shadow:

“It’s nice! I have set a lot of personal goals, so I guess it’s rewarding to see my ranking go up, and all the hard work I’ve been putting in over the years starting to pay off: yes, I’m definitely excited with how it’s going.”

He has, since Montreal, beaten Richard Gasquet, taken David Ferrer to a third-set tie-break and now looks forward to an eminently winnable quarter against Ivan Dodig. Thereafter, it may be Federer for a second time, but as a considerably more accomplished player than before.

But one match at a time: Federer also has a quarter to win, and it will be the long-awaited and long-anticipated first encounter with 22-year-old Dimitrov, a player tipped to break into the top ranks ever since he captivated Wimbledon by winning the junior title in a style reminiscent of that tournament’s favourite son, the man he had admired from childhood, the man now a decade his elder: Federer.

Rather like Pospisil, Dimitrov also needed time to mesh his many skills, grow into his rangy frame and developing the fitness and consistency to put a title-winning run together.

Having rattled up the rankings from 360 to 60 in the space of 12 months through 2010 and 2011, he slipped behind some of his contemporaries: Raonic and Jerzy Janowicz both beat him into the 20s and beyond. But 2013 saw Dimitrov finally blossom, reaching his first final in Brisbane, then taking Nadal to three sets in Monte Carlo, and most significant, beating Djokovic in Madrid.

Finally, last week in Stockholm, he beat Ferrer to win his first title and a new career-high ranking of 22.

Fewer than two years ago, however, Dimitrov’s second-round Basel opponent was ranked 13, but fortunes can change quickly in this dog-eat-dog world of tennis. Dolgopolov, without even a final to his name since the summer of 2012, is now No38, and with 10 first-round losses to his name this year.

Unfortunately, the contrast between the soaring form of Dimitrov and the plummeting confidence of Dolgopolov permeated the entire match. The slight man from the Ukraine looked downcast and lacking in energy, and for every brilliant winner—and he has some of the most delightful and unorthodox touches in the book—he made half a dozen poor shots or errors.

Meanwhile, Dimitrov was showing just what a talent he is, opening with a serve- and-volley winner, hitting two aces, and finishing with a forehand—and that was just the first game.

Dolgopolov staved off three break points in the second game but could not do the same in the fourth, and Dimitrov was soon 4-1 up. By the set’s conclusion, 6-3, Dolgopolov had made 13 errors to Dimitrov’s five. And though he hung tough through the opening games of the second set, the break came from another error in the fifth.

Dimitrov, smelling victory, went from good to brilliant, showcasing an airbound single-handed backhand, chasing down drops, and eventually serving out to love, 6-2. What’s more, he had backed up his all-court speed and variety with 12 aces, dropped just three points on his first serve, and offered up not a single break chance.

It seemed essential to ask about his coaching set-up, based in Sweden for most of this year, and the improvements it had brought:
“Throughout the whole year I was working a lot…There were weeks when I was staying in the gym all day, and even before a match when I spent maybe an hour in the gym, doing weights and things. I just never stop working. I know the season is long, but I think that’s the point: you’ve got to improve yourself on a daily basis, not just when you have the off season.”

But of course the question on everyone’s lips was his next match against Federer and, what’s more, in Basel:

“First time playing against him, and what better way to play him than in his home town. Hopefully it’s going to be a good match. He’s the greatest, gave the opportunity to so many players, brought so much to the game—everyone wants to play against him. I’m excited.”

He added, with a broad smile: “I’m sure everyone’s going to cheer for him and that’s normal. I’m not offended!”

One thing is certain. Federer will have to play some very good tennis to beat the 2013 version of Dimitrov and, if he does, it could be a match for the record books.

Valencia 2013: David Ferrer bounces back into form in his home town