Basel 2013: Roger Federer sets up a final against Juan Martin del Potro at the Swiss Indoors after a three-set victory 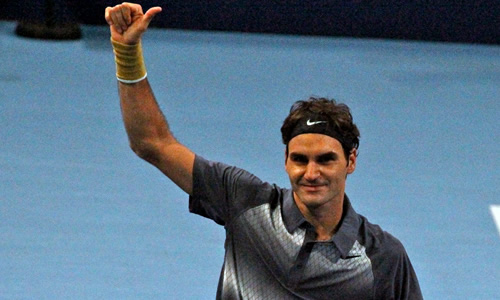 Roger Federer is through to the final in Basel Photo: Marianne Bevis

The semi-finals at the Swiss Indoors had taken on a rather familiar look. Just as last year, one match featured the top seed and five-time former champion Roger Federer, and the other featured the second seed, Juan Martin del Potro.

This time, however, it was del Potro who was top seed and Federer No3, for it was the Argentine who arrived in the better form, a winner in Tokyo and finalist in Shanghai. Federer had won just one match through the Asian swing after his surprise fourth-round loss at the US Open.

Yet Basel showed every sign that they could compete for the title again. Del Potro, yet to face a seed, had not dropped a set. Federer had dropped only one, but had then dispatched the No8 seed and rising star, Grigor Dimitrov, in straight sets.

Both now faced unseeded men who had yet to win a title: del Potro the No65-ranked

Edouard Roger-Vasselin of France who had seen off No4 seed Stan Wawrinka in the first round; Federer the No40 ranked Canadian Vasek Pospisil, who had halted the serving of Ivo Karlovic and then Ivan Dodig.

Del Potro’s contest looked a straight-forward affair: his 29-year-old opponent had only ever reached one final before—though that was earlier this year. He had also survived a tough three setter the day before. However, their only two previous meetings painted a different story. Roger-Vasselin beat del Potro handily in Tokyo in 2009, and then took the Argentine to four sets at the French Open last year—two of them tie-breaks.

And so it proved. Del Potro looked entirely in control to break in the opening game, found himself level again at 3-3, but hit straight back with a love break to take the opening set 6-4.

After a long medical time out for a nose-bleed, he nevertheless scored the first break in the second set game, but Roger-Vasselin put together a terrific flow of tennis to win three straight game and the set, 6-4. Pricked into action, del Potro turned on the fireworks—drops, a hot-dog and a running forehand winner—to take a 4-0 lead, and he sealed the match after two hours, 6-2.

However, it was always the Federer semi that looked the more compelling—just as his quarter against one of the young pretenders to the top-10 had been. For here was another player almost a decade younger than the 32-year-old Federer, who admitted to idolizing the Swiss as he grew up, and he was beginning to fulfil his own many-faceted talent this year.

The 23-year-old Canadian first broke the top 100 last year with a series of Challenger titles, but he was knocked back by glandular fever and missed the 2013 Australian Open. This year, though, his increasingly athletic and attacking style of play took him back inside the top 100, to a first semi-final in Bogota and, a significant breakthrough, to the semis of the Montreal Masters, where he beat John Isner and his first top-10 opponent, Tomas Berdych.

He had since beaten Richard Gasquet, taken David Ferrer to a third-set tie-break and now took on his biggest challenge so far. But the prospect of playing Federer delighted him:

“I’ve played him once already, and that was one of the highlights of my career: He was an idol growing up. Now in Basel, it would very special.”

The meeting to which he referred was more than two years ago, but even then, Pospisil put up a spirited fight in a 7-5, 6-3 loss in Montreal. This time around, the Canadian was a considerably more accomplished player, and there was no doubt that his confidence and his ambitions had grown. He confessed, almost apologetically: “I guess a really high goal, a great goal for me next year, would be to finish somewhere near the top 20… Maybe win my first title or something, but…it’s all process. All I can control is getting better every day.”

The question was, would he find it as hard as Dimitrov to take on not just the Federer record in Basel—a finalist here for the last seven years—and the chanting of Basel itself? At first, yes he would—and he admitted as much straight afterwards:

“You wanna win but you have such a tremendous amount of respect for your opponent that it’s always tough to compete…for sure I was battling myself a little bit.”

Even as he entered the court, he said “I realise I’m pretty much playing a living legend”, and that was how it looked as Federer chipped and charged his way to a break in the fourth game, and sealed the set with another break, 6-3.

The Swiss looked on his way to a speedy victory, breaking to serve for the match, 5-3. But something had clicked in the Canadian—perhaps one small incident, a lone cheering voice for him amid the roaring Federer support. He paused, grinned and put up his thumb in thanks. And he broke to level and take it to a tie-break.

And an assured 13th game it was, too, 7-3—and Pospisil got to serve first in the decider. In truth, he looked the more confident player, too, as Federer lost focus, made errors and missed first serves. Having led 40-0 on serve in the fourth game, he lost five straight points.

Pricked into action, though, Federer broke straight back, only to defend another break chance at 3-4. He survived, and they stood at 5-5 with the match 2hrs 20mins old.

But now the Pospisil serve began to look more fragile, and he held off break point after break point as, time and again, he saw a Federer backhand fly past him and the Basel fans raise the roof. It took four attempts, but finally the critical break came and Federer served out a deafening victory, 7-5.

Pospisil showed great composure in saying, just moments after leaving court, how difficult it was to play “someone I’ve pretty much idolized”, but added, “Every match is a learning experience. I’ll watch the tape. When you play the greatest players, you learn what your weaknesses are, so I’ll take a lot from this.”

“It was good to have such an atmosphere out there, cos many of the matches are more one-sided. To come out of it as winner is a good feeling, but clearly watching is actually worse than playing itself.

“I think my concentration was good throughout, should have closed it out, was up 5-3, 15-0, and one forehand almost cost me the match…. But overall it was OK.

“It was clearly always going to be a different kind of match because he serves big, plays aggressive himself, a more classical indoor tennis match.”

And if there was any doubt about Federer’s continuing desire to win, even from the toughest of positions, this certainly allayed them. He is in yet another Basel final against the man he faced last year, and if he wins, he is also assured of the World Tour Finals.

Del Potro summed it up: “He’s Roger Federer, playing in his hometown and on this surface. He’s won here five times. He’s looking forward to winning again and to qualifying in London. If I play much better than I did today and serve well, I know the way to make things complicated for him.”

All will be decided in around 24 hours’ time.