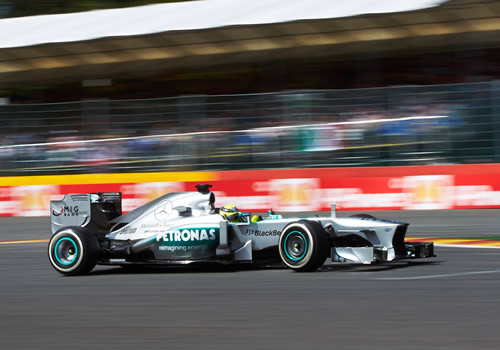 Lewis Hamilton secured pole for the Belgian Grand Prix in the final seconds of a dramatic qualifying session and will start from the front of the grid for the fourth race in a row at Spa.

Rain ruled the day and the teams were keen to get the session going to avoid the forecast downpours with all the drivers getting onto the track within the first two minutes.

For much of Q3 it looked as though Paul Di Resta would secure his first ever pole but his luck ran out and he was knocked down to fifth.

Di Resta had been the fastest man after benefiting from Force India’s decision to send him out on intermediate tyres, whereas the rest of the top ten struggled on dry tyres.

The rain died down in the final minutes of Q3 which saw Mercedes and Red Bull edge Di Resta out of top spot.

Despite being fastest in P3 Sebastian Vettel was nudged down to second but will start ahead of his team-mate Mark Webber.

The Ferrari team will undoubtedly be disappointed and may struggle tomorrow as Fernando Alonso could only manage ninth and Felipe Massa will start tenth.

There were some early casualties in Q1 when both Jean-Eric Vergne and Daniel Ricciardo failed to make it through to Q2 for the first time this season.

Marussia’s gamble in Q1 to opt for the medium tyre paid off as both their drivers made it into Q2 with Jules Bianchi securing 15th and Max Chilton grabbing 16th place.

The same decision also benefited Caterham’s Giedo van der Garde who secured an amazing third place in Q1, but could only secure 14th in the second session.