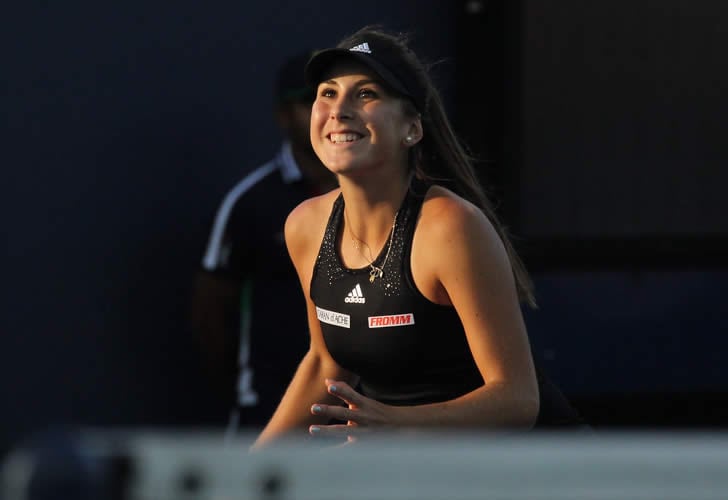 It seems no time at all since a young Swiss woman, Belinda Bencic, hit the women’s pro tennis circuit with such precocious promise.

Age 15, she played her first main-draw match. Age 16, she won the French Open and Wimbledon junior titles and ended her season as the No1 junior.

By 17, she had reached her first WTA final and, more impressive still, was a quarter-finalist at the US Open. She ended 2014 at No33, and in 2015, still only 18 years old, won two titles, including the Premier 5 in Cincinnati: She beat Serena Williams, Caroline Wozniacki and Simona Halep in the process.

By the start of 2016, she was already at No14, beat Angelique Kerber in their Fed Cup tie, and broke into the top 10 with a final finish in St Petersburg—all before turning 19.

But come late spring, and injuries ate into her entire clay season, brought two retirements on the grass, including Wimbledon, and she would post six more first-round losses as she slipped to 43 by the end of 2016.

And on to 2017, which began inauspiciously with only one match-win in seven WTA tournaments. She bowed to the inevitable, and following her 20th birthday, had wrist surgery. By the time she returned in September, she was outside the top 300.

Yet if ever surgery proved to be the right decision, this was it: Bencic has barely lost a match since working her way back via the ITF ranks. Her first event was a title run in St Petersburg, then it was a couple of semi finishes, followed by back-to-back WTA titles in Hua-Hin and Taipei, plus one more ITF victory in Dubai—a tally of 28 wins for three losses. And it meant that she began 2018 on a 15-match winning streak and a guaranteed direct entry into the Australian Open.

She explained her decision to do it the hard way, with no recourse to protected ranking or wild cards, to WTA Insider:

“I was happy to come back at the smaller tournaments. It was less pressure for me, it was less attention at the tournament itself. I wanted to work my way back and not just take a wildcard and not be prepared for this kind of level, then lose first round, second round. I just wanted to get matches and work my way back up.”

It was a good call, encouraged perhaps by an experienced new coach, Iain Hughes, who stepped into Bencic’s father’s shoes during her time in rehab.

Still only 20, then, 2018 might be seen as a fresh start for the Swiss with the bold tennis that was honed in its early development by the mother of that other brilliant ‘Swiss miss’, Martina Hingis—who became No1 and won three Majors in the year Bencic was born, and all before she turned 17.

It must have been tempting, however, for Bencic to continue building on her ranking at the start of a new season. But wisdom prevailed again, though the decision may have been eased by the kind of temptation that most young players would find hide to resist. For the second year running, Bencic was invited to partner Roger Federer in the ITF team tournament, the Hopman Cup, in Perth.

For Federer, the decision to forego the ranking points of Brisbane or Doha was not difficult, either.

The Hopman Cup offers a guaranteed three matches against strong opponents, plus the chance to sharpen the net game in short-form mixed doubles. Perth also provides a relaxed, sunny, beach-fringed launch-pad to the Australian Open, a perfect setting where he and his young family can acclimatise—to weather and time-zone—on the way from their Dubai base.

Add into the equation that the tournament was also the venue for Federer’s first senior title, as a teenager playing alongside Hingis in 2001, and then proved to be the perfect preparation for his 2017 surge to two Majors and the No2 ranking, and it was a natural choice for the Swiss. So he got his request into Bencic early, and she admitted that it had spurred her on during those difficult summer months.

“It’s such a huge opportunity when Roger asks me to play with him. It’s such a huge highlight. I knew it from before the surgery, so it was something to look forward to, to get fit for that. So hopefully I can be at my best there.”

And so it proved to be. She reeled off wins over fellow 20-year-old Naomi Osaka, then against the No15 ranked Anastasia Pavlyuchenkova, and finally against No10 Coco Vandeweghe, and went unbeaten with Federer in doubles. Confident on serve, crisp with her backhands down the line, and showing fine touch around the net, she looked every inch the No7 player she had been fewer than two years before.

Only the woman who was No1 this time last year, Angelique Kerber, got the better of her in the final—out-powering the Swiss in what Kerber’s fans will hope bodes well for the German’s own comeback to form.

With Federer also excelling in a field that featured four top-10 men—and he went unbeaten in singles—he inspired some match-winning confidence in Bencic in their title-deciding doubles against Germany. There, she both returned the Alexander Zverev serve with interest, and set up Federer for some perfect volley interceptions on her own serve.

It proved to be a winning combination, and helped the oldest player in the tournament to his second Hopman Cup, 17 years after the first. For Bencic, it was the first, and brought with it a splendid diamond-encrusted silver tennis ball. No wonder she could not stop smiling.

Indeed, that has been a mark of the tournament, especially in the handful of ‘dead’ doubles rubbers: the smiles, the fun, the sheer pleasure of playing tennis and entertaining the big crowds that have packed the stunning Perth arena.

But there has been a competitive fire between the various rivals, too, and not least between what could shape up to be one of the rivalries of 2018, Zverev and David Goffin. Federer was also keen to halt the Zverev surge in this final tie, too, in what became a real battle of wills after Zverev edged the first-set tie-break.

Yes, they were playing for diamonds rather than ranking points, but plenty of markers were laid down in Perth, too. The four high-quality finalists will certainly know they have played some tough tennis when they hit the physio’s table.

Indeed Federer, as last year, will not play another match before he begins the defence of his Australian Open title. And Bencic has eschewed the remaining WTA tournaments before the Open, opting instead for an exhibition event, the Kooyong Classic.

But take note: She may still be ranked just 74 come the first Major of 2018, but the revitalised 20-year-old Bencic means business. No seed will want to draw her name in the first round in a week’s time.