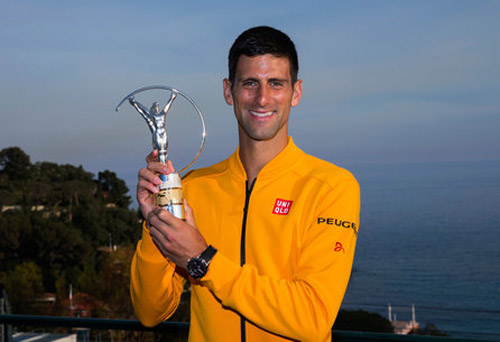 Boris Becker and Novak Djokovic are celebrating after the world tennis No1 was nominated for the Laureus World Sportsman of the Year award for the second straight time.

The Serbian star has already won the Australian Open for a sixth time after a straights set victory over British number one Andy Murray in January.

In an exclusive interview on Laureus.com, Becker, who has coached Djokovic since January 2014, said:

“Very few players, if any, had a year like that.”

In the interview, Becker gave a unique insight into the sporting and personal life of Djokovic and his amazing year. He also looked forward to the rest of 2016.

“We’re very happy that Novak is nominated again. He won the Laureus Sportsman of the Year Award last year and he’s had a great year again. Very few players, if any, had a year like that,” Becker added.

“Novak was not raised with a golden spoon. He was born in war-torn Serbia and they had to leave their apartment a couple of times, because bombs were over their heads. That defines your character. I call him, in the best possible meaning of the words, a real street fighter.”

“A lot of people have asked ‘OK, how do you want to top last year?’ I say it’s not about last year, it’s about now. It’s match-by-match, tournament-by-tournament. If we have this conversation at the end of November and he’s won a couple of tournaments again, we are happy.”

“Can he overtake Federer’s 17 Grand Slams? At the moment, that’s far-fetched. Once Novak’s career is over – I don’t know how long he wants to play – then you talk about this.”